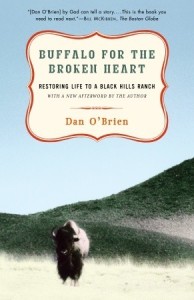 Summary: Part memoir, part nature-writing, this book describes the story of a cattle rancher who hits bottom, and makes the transition to herding buffalo for economic and ecological reasons.

Dan O’Brien grew up in my home state near Findlay, Ohio and even holds a degree from Bowling Green State University in northwest Ohio. He has traveled a long way from the flat, rich farming land of northwest Ohio to the plains of South Dakota. Along the way, he has written novels and worked as a wildlife biologist who helped reintroduce peregrin falcons to the Rocky Mountains. Eventually he bought the Broken Heart ranch on the Great Plains of South Dakota, and like so many around him, tried to make cattle ranching work. 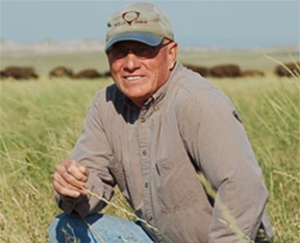 This book describes those efforts, and the losing struggle to make cattle ranching viable. The book alternates between his efforts to use the range land in an ecologically thoughtful way, the economics of the cattle industry that worked against him, and the attempts of others to make a go of things on this land before him. He hits rock bottom when his wife leaves and the bottom drops out of the market for beef. About this time, he encounters a buffalo on the road, and then begins to talk with others who have turned to raising this creature which lived on these plains until nearly exterminated.

He helps out at a buffalo roundup on another ranch and comes home with thirteen young buffalo. And so begins the story of how he and his ranch hand Erney convert the Broken Heart to a buffalo ranch and the “wild idea” they come up with to circumvent the typical feed lot and meat packing industry to provide buffalo meat as it was eaten by the people of the Plains for thousands of years. Along the way, he continues to narrate the stories of the people around him, including the suicide of the son of a Native American family living next door to him, and the redemptive experience of allowing the husband to shoot the first buffalo harvested on the land. This story was beautifully narrated, both in the description of what it meant for the neighbor, and the almost mysterious way the buffalo bulls came to their hunter. I won’t say more because you must read this in context to fully appreciate it.

O’Brien writes in the tradition of ecological writers of place going back to Aldo Leopold, Louis Bromfield (Pleasant Valley, his narrative of restoring Malabar Farm near Mansfield, Ohio), Wallace Stegner, who also wrote of life on the Great Plains, and Wendell Berry and Wes Jackson. Some of his best writing in this book comes in his observations of how buffalo just “fit” the ecology of the Great Plains:

“Was the increase in bird life on the ranch a partial result of a different, evolutionarily more compatible kind of grazing? Did the buffalo’s way of moving quickly from one part of the pasture to another affect the grass more positively than the wandering of domestic livestock? Was the entire matrix of the ranch’s ecosystem improved by the simple conversion back to large herbivores that had evolved to live here? In my heart I was coming to believe that the answer to all these questions was yes. I wanted to shout it to the skies, but I had learned long before that when profound questions are asked of the heart, the answers are best kept to yourself” (p. 168).

The concluding part of the book narrates the beginnings of The Wild Idea Buffalo Company. The big idea was to kill buffalo at the peak of their development on the range, fed on the range grasses and not artificially fattened on feed lots (destroying the beneficial qualities of lean buffalo meat) and killing them in their natural habitat without the trauma of slaughterhouse. As you can see from the web link above the company has continued to grow and you can buy from them. The website describes Wild Idea this way:

“The Wild Idea Buffalo Company is the leading provider of grass-fed, naturally-raised buffalo meat in the United States. All the buffalo (also called bison) meat we sell is antibiotic and hormone free, 100% grass fed, non-confined, free-roaming and humanely, field-harvested. Ours is the best gourmet meat you can buy on-line and have delivered to your home. No other red meat is better tasting, better for you or better for our planet.”

This book was a birthday gift from my wife, along with Dan O’Brien’s sequel, Wild Idea. She knows my love of writers like Wendell Berry and Wallace Stegner, and heard about this book, and O’Brien’s story on public television and it truly was a wonderful gift and leaves me looking forward to the sequel. And you can look forward to a review in weeks to come!

4 thoughts on “Review: Buffalo for the Broken Heart”