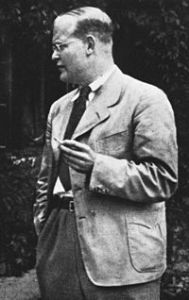 “The ultimate test of a moral society is the kind of world that it leaves to its children.”

For some time, I have used this quote in the “signature” for my emails. I attributed the quote to Dietrich Bonhoeffer. I think I must have picked it up off a quotes site when I did a profile of Bonhoeffer for a book group.

A friend contacted me recently after I used the quote in a post about the encyclical “Laudato Si’ ” by Pope Francis. Others have used this quote in connection with matters related to the environment and my friend was interested in the context in which Bonhoeffer was using the quote and where it could be found.

One was that I left a message at the website of Eric Metaxas, who has written a biography on Bonhoeffer. One of his staff responded but could not give the source of this quote either but suggested works in which I might find it.

A search in Google Books turned up nothing so I turned to trusty Facebook and asked my friends. None of those who responded could find it either. One friend, Nancy, talked to Charles Marsh at the Bonhoeffer House who said Bonhoeffer wouldn’t have used these words but mentioned that in Letters and Papers From Prison Bonhoeffer said, “The question of ultimate responsibility is not how I might extricate myself heroically from the situation but how the coming generation is to live.” Looking “inside the book” on Amazon, I found this in the front matter toward the bottom of page 7. The discussion was on the question of our responsibility toward history, which ultimately was not to be heroic or “successful” (the section is titled “on success”) but to consider our responsibility to the rising generation.

Back to the quote that I thought was Bonhoeffer’s (and may still be although no source for this has been found so far). This all seems a big deal over a quote that most people I know like and give at least intellectual assent to. Most, apart from Charles Marsh, would think it sounds like something Bonhoeffer would say. And it is often quoted. So why not?

I think the issue is truthfulness. It seems this has become a slippery slope, particularly in our public discourse. The problem then becomes the credibility of anything anyone says. Do we ever really want people to trust us, to take us at our word. That can only be so if we tell the truth to the best of our ability. And so from now on, I will have to say of this quote, “source unknown, commonly attributed to Dietrich Bonhoeffer.”

If someone reading this actually knows where the quote that begins this post comes from, whether by Bonhoeffer or not, drop me a note in the comments.

2 thoughts on “Did He Really Say That?”