The Road Back to You, Ian Morgan Cron and Suzanne Stabile. Downers Grove: InterVarsity Press, 2016.

Summary: Describes the Enneagram and each of the nine types, and how these may be helpful in Self-discovery, uncovering one’s true self and experiencing spiritual growth. 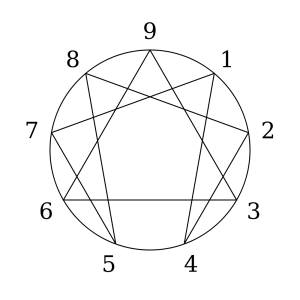 John Calvin, and many others have observed that knowledge of God and knowledge of self often go hand in hand. Often, what we do not know or knowledge that has been colored by the wounds of our upbringing deflect us from knowing God and ourselves truly. One of the tools that has been found increasingly helpful by many spiritual directors and others who work with spiritual formation is the Enneagram. It’s roots go back to a fourth century Christian mystic, Evagrius, who developed a system based on the seven deadly sins, plus an overarching sin of self-love. G.I. Gurdjieff first developed the Enneagram figure and two personality psychologists, Oscar Ichazo and Claudio Naranjo developed the modern theory that underlies the Enneagram. It was introduced into spiritual formation circles by Catholic retreat leader Richard Rohr and several other Jesuit priests.

They explain that these come in three triads of three: Anger or Gut: 8, 9, 1 ; Feeling or Heart 2, 3, 4; and Fear or Head: 5, 6, 7. Also each type is modified by one or both of their wings (the types adjacent to them) and have a type the gravitate to under stress and when they are secure. Sound a little confusing? Cron and Stabile walk us through all this both in introduction and the survey of each type.

Starting with the Anger or Gut triad and Type 8, they devote a chapter to each type, beginning with a list of 20 points of what it is like to be that type, describing the type in its healthy, average, and unhealthy expressions, and talk about its deadly sin. Then they give a more detailed description, talk about the type as a child, in their relationships and at work. Then they explore how the “wings” and the types they tend toward when feeling stressed or secure shape the expression of their type. They conclude with what spiritual transformation looks like for the type and ten steps for each type to take in transformation.

Throughout, they give examples of the type from people they know (including themselves and their families) as well as famous individuals (I discovered that Oliver Sacks, Albert Einstein, Stephen Hawking, Bill Gates, and Dietrich Bonhoeffer were/are likely the same type as I am–except they are all far more intelligent!). I found myself laughing as they describe the different types, until I got to my own, where I found myself alternately saying “yes” and “ouch!”

Like other writers like Richard Rohr, they don’t offer a test to find your type. Rather, here is what they recommend:

“If while reading a description you begin to feel squeamish because it’s captured your inner world in a way only someone who hacked into the server where you back up your personality could know about, then you are probably zeroing in on your number. When I first read my number I felt humiliated. It’s not pleasant to be the rat in a dark kitchen who is so focused on devouring crumbs that he doesn’t hear the stealthy homeowners approaching and therefore doesn’t have time to take cover before they suddenly switch on the light and catch the rat in the act with a bagel in its mouth. On the other hand I felt consoled. I didn’t know there were other rats like me. So if this happens, don’t despair. Remember each number has its assets and liabilities, blessings and blights. The embarrassment will pass, but in the words of novelist David Foster Wallace, ‘The truth will set you free, but not until it’s done with you.’ “

That gives you a pretty fair picture of what you are in for, both in terms of writing and your experience as you read this book. The one thing worse than knowing this stuff about ourselves is for it to be present in our lives and to not know it. Knowing helps us pursue paths of growth along the lines of who we are rather than who we aren’t. And it helps us to be gentler with all those other types, whose unique predicament parallels our own. Most of all, it begins to help us understand the depths of the grace of God that meets each of us uniquely and in the depths of our own deadly sins. If you are ready for and hungry for that kind of knowledge, then this book is a good place to begin.

6 thoughts on “Review: The Road Back to You”