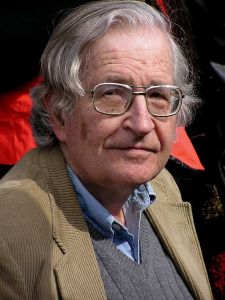 By Duncan Rawlinson [CC BY 2.0 ], via Wikimedia Commons

On Friday, July 14 Salon posted an interview between Charles Derber and Noam Chomsky under the title “Noam Chomsky: The Left Needs to ‘Find Common Ground’ with Evangelical Christians.” I found it surprising that Chomsky would propose this and perhaps reflective of a certain desperation of the Left to recapture national influence. Reading on, I found that Chomsky had in mind progressive evangelicals like Jim Wallis, who would be sympathetic to many of the same causes those on the Left embrace. That, of course, makes sense and reflects a reality not apparent to many in the media, that evangelicalism is not monolithic, and that there are many who would not align, apart from a common faith in Christ, with the putative leaders of evangelicalism–Franklin Graham, James Dobson et al. Still, I’m not sure that this is all that helpful and might only perpetuate the existing divides in our national life. I’d suggest something different that I have framed as a letter to the Democrat Senator from my state, Sherrod Brown. Here it is:

I’m writing to you in response to an interview with Noam Chomsky suggesting that the Left in our country reach out to evangelicals. I’m one of them, an Ohio resident, and I think that is a good idea, with a few cautions.

The first is that the worst thing, at least for the health and vibrancy of evangelicalism, is to treat us as a political block. The alliances between some white evangelicals and the Right have alienated many of our youth who are leaving our churches in record numbers. Part of this is that we are a diverse body, particularly along generational lines, as well as along lines of ethnicity. It would be great if you could bring some of our younger and older leaders together, some of our black, Latino, Asian, and white leaders together, if for no other reason than to hear each other. It would certainly help you begin to appreciate the complexity of the real evangelical movement, and not simply the one its putative leaders represent.

It would help you to understand that many of us don’t recognize the “evangelicals” being portrayed in the media and among the intelligentsia. Many of us don’t have the time or access to readily counter those perceptions. In a church like mine, what energies we have are much more devoted to running our food pantry, hosting our community garden and free clinic, collecting school supplies for a growing number of children from low income households and figuring out how to stretch what resources we have further if our country decides to further eliminate some of the safety nets on which those on the margins have relied. We know you care about such things as well.

It would help if you understood that evangelicals have had reason to be nervous about religious liberties, and why they are responsive to appeals to uphold these. When Bernie Sanders questions Russell Vought, a nominee for deputy director of the Office of Management and Budget on his religious views, in violation of Article VI of the Constitution and does so unchecked, it worries us. When religious student organizations on university campuses have faced de-recognition and loss of privileges simply because they wished to choose leaders who affirmed their religious beliefs, it worries us. When an order of Catholic nuns are forced to include contraceptive coverage in their health plan, violating their deeply held beliefs, it worries us. Yet concerns for First Amendment freedoms extend far beyond us and could be a place for forging common ground as we protect conscience, association, a free press, dissent as well as religious belief.

We are often written off as anti-abortion rather than recognized for the deep care we have for an ethic of life. You might press us to be more consistent with that. How concerned are we to protect the lives of those across socio-economic lines and from childhood to old age? There are a number of us who are consistently pro-life and an important conversation might be had about how to protect the lives of our children in neighborhoods riven by drug overdoses and gun violence, and our elders whose lives may be shortened and made more painful by sub-standard care.

Evangelicals from Cincinnati to Oberlin were on the forefront of nineteenth century movements to end slavery and to advance women’s suffrage. In recent times, evangelicals in this state have been on the forefront of fights against human trafficking and other social causes. At the same time, we could learn from you about some of the structural challenges under-girding some of our most pressing social problems.

We would hope you might understand more of how important marriage and family are to us. Most of us don’t want to campaign against those who see these differently, but we do think families are important places in the formation of the character, faith, education, and vocational aspirations of our children. We sometimes feel that families, and parents are marginalized in some education systems by “experts” who disparage the values we teach in our homes. Many of us don’t want to eliminate public schools, but do want a greater sense of participation as stakeholders in the education of our children.

There is much more we could discuss, but one last area I might touch on is care for our creation. Christians are often disparaged for their ideas about creation (although here as elsewhere, our views are quite diverse), but this is in fact basic to better care for our planet because we understand we will have to give an account for the care of the creation to the Creator, as well as to our children and grand-children. We differ among us about climate science, but any of us who are conscientious about our faith recognize that in our care for the earth, as elsewhere, we must answer to God.

I do hope you will reach out to evangelicals, here in Ohio and elsewhere, not to win us over as an electoral block, but for our common interest in the good of the country. It could be one more of many steps in healing our divided land, and finding ways to pursue the common good, rather than particular goods.

PS from 2018. You may also find that our commitment to life and family means many of us abhor what is happening on our southern border and would support measures that do not separate families and offer refuge to those who need it. Many of our churches stand ready to help.

6 thoughts on “Chomsky, Evangelicals, and a Letter to My Senator”