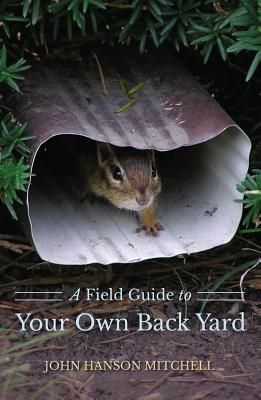 A Field Guide to Your Own Back Yard, John Hanson Mitchell. Woodstock, VT: Countryman Press, 2014.

Summary: An exploration, season by season of the animals, plants, insects, bird, amphibians and reptiles, and weather conditions we might encounter in our own back yard, even as city dwellers.

Many ecological books seem to be concerned either about really big problems like air pollution or climate change, or really big spaces away from cities–from polar ice to wilderness to forests. It has long seemed to me that if we don’t care and notice the spaces where we live and most immediately have care for, the rest of it tends to be an abstraction. I became aware that at least our own climate was changing when I discovered that I could now safely plant frost tender things after May 1 when I used to wait at least a week longer. Our local nursery confirmed it several years ago noting that we were now in a warmer growth zone with a longer growing season, reflected in their having annuals in the greenhouse earlier.

Still, I suspect there is much in my backyard to which I’m oblivious until it stares me in the face. I considered skunks denizens of the woods until one stared me in the face recently on several visits to my back yard. It occurred to me when I saw some growing in a ditch, that it had been several years since I’ve seen Queen Anne’s Lace, considered a weed, in my backyard. Aside from cardinals, sparrows (what kind?), blue jays, robins, and the occasional crow, and the ubiquitous Canada geese in nearby retention ponds, I don’t pay attention to the bird life. I mostly notice insects and arachnids if they get inside my house, or nibble my roses. So when I saw A Field Guide to Your Own Back Yard, it struck me that it might be helpful in being a bit more observant of my own patch of the creation.

That’s John Hanson Mitchell’s aim as well. He writes, “…the talent for observation is a learned art, and with very little effort it is possible within a single year to become intimate with the natural environment of your immediate neighborhood. The best place to begin, of course, is your own backyard.” This, in a nutshell, describes the contents of the book, as Mitchell walks us through the seasons from early spring of one year to late winter of the next. He notices and tells stories season by season about his observations of weather conditions, migratory birds, trees, wildflowers and weeds, butterflies, morels and mushrooms, shrubs, insects, amphibians and reptiles, backyard mammals, pests and their natural enemies. He writes about the things we’ll come across if we look closely: nests, holes in trees and what we might find living there, hornets nests, galls on plants, wetland life, life under the bark and running sap. He writes about the life we might find around our woodpile, and our birdfeeder. A number of hand drawn illustrations complement the text at key points.

I discovered that the skunk in my yard was probably eating grubs and that this is its redeeming virtue. I looked where it had its nose in our turf and suspect the author was right. There were little holes where it was probably feeding after a rainfall. Still, this is a mammal not to be encouraged and so I made sure there were no sheltered spots around our foundation where it could make a home, because sooner or later it would spray. I suspect, the skunks (we later saw it trailing four or five babies) is living under a neighbor’s deck.

I also realized beyond the basics, I don’t know the identity of our trees. I could do far better at learning and observing the different avian visitors who consume many of our pesky mosquitoes. I might learn when the bird migrations are in our area and watch for them. I learned this about the fireflies I delight to watch on a summer evening: “Electric lights are only about 10 percent energy-efficient, whereas firefly lighting approaches 100 percent and is, in comparison to firelight, gaslight, or electric light, entirely pollution free.” I learned at that the toad I found in my downstairs office last summer is my friend, eating up to 200 insects a night, mostly pests. I’m glad I released him into our back yard! I decided that some of the weeds at our property margins might be worth leaving rather than cutting down with the weed eater. I learned that if you are good, you can distinguish calls of the different kinds of crickets and frogs at night. And the author confirmed something else I’ve observed over the year–nothing deters a hungry and very clever squirrel!

This might be the year I begin a back yard journal. Mitchell’s stories remind me of things I’ve seen, but perhaps not sufficiently paid attention to. He also helped open the eyes to the reality that the quarter acre on which we live is bustling with life that happens to share the space with us and the wonders awaiting me outside my front and back door. We might find different things in our back yard that Mitchell does in Massachusetts. But he gives us some good clues of what we might look for.

2 thoughts on “Review: A Field Guide to Your Own Back Yard”