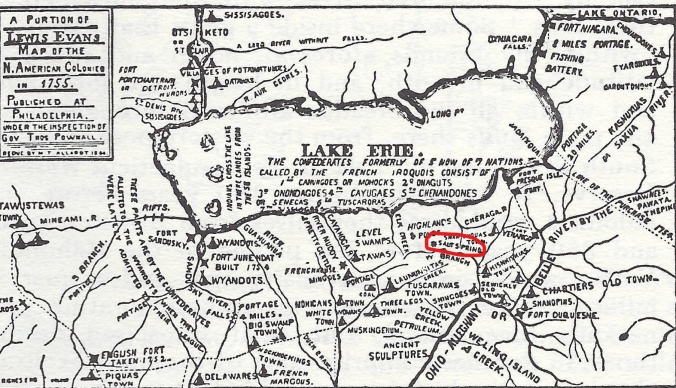 Do you know that the “Salt Springs” literally put the Mahoning Valley on the map? In fact, did you know that the word “Mahoning” is derived from the Lenape word “Mahonik” which means “at the lick.” In 1755 (41 years before John Young surveyed the area), Lewis Evans drew the above map, printed in Philadelphia by Ben Franklin, in which the location of the “Salt Springs” is noted. While the map is lacking in geographic accuracy, it highlighted what the earliest travelers through this area thought important. Salt.

Salt is essential to human health. It was used in the preservation of meat. One of its uses was cleaning brass. It had other medicinal uses. Indians in the area boiled water from the springs to produce salt for centuries. As it turns out, the “Salt Springs tract,” 24,000 acres in the vicinity of the Springs, was purchased by General Samuel Holden Parsons in 1788 and set up a station to extract salt from the waters. Sadly, he died on one of his trips, drowning in the falls of the Beaver Rivers in 1789. The land reverted to Connecticut. The site seemed to have an ill fate hanging over it. In 1786, a storekeeper was killed by Native Americans, and another salt maker in 1804. Reuben Harmon eventually acquired the land, somewhere between 1796 and 1801, according to different accounts. It never became a great salt-making operation–the salinity of the waters was too low to extract large quantities. 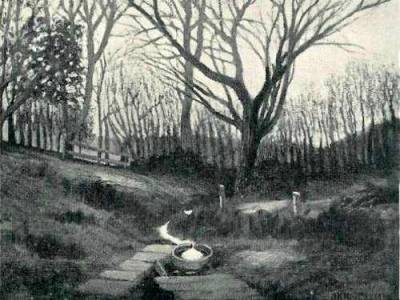 Salt Springs, from a painting by Joseph N. Higley, from a photograph taken in 1903, just prior to the springs being covered by railroad fill.

So exactly where were the Salt Springs? They were located in Weathersfield Township, west of present day Route 46 near the intersection of Salt Springs Youngstown Road and Carson Salt Springs Road. In 1903 the Baltimore and Ohio Railroad right of way filled in the springs. In 1949, Harlan Hatcher, in his book The Western Reserve, wrote:

“One lone spring continues to bubble up through a piece of drain tile. It has a feeble taste of salt and a stronger smell of sulpher.”

In 1963, James L. Wick, Jr, took pictures of the site, showing the location of the stream. These photographs may be seen at the Mahoning Valley History blog. On June 30, 2018, an Ohio Historic Marker was dedicated at the nearby Kerr Cemetery by the Mineral Ridge Historical Society and the Ohio History Connection. The text of the marker reads:

Text, side A: A salt spring, located about a mile west of this site, was the primary attraction for immigrants to the Western Reserve territory in the mid-1700s. Prior to European-American settlement, Indians used the springs, boiling the water to extract the salt and using it for preserving meat among other uses. In 1755, surveyor Lewis Evans underscored the importance of the springs by noting it on his “General Map of the Middle British Colonies in America.” This enticed immigrants from western Pennsylvania to the region. In addition to the salt itself, the abundance of wildlife near the spring ensured good hunting in the area. (Continued on other side)

Text, side B:  (Continued from other side) In February 1788, Connecticut, which asserted ownership of the Western Reserve from the colonial period to 1795, deeded the Salt Spring tract to Samuel Holden Parsons, a pioneer of the Northwest Territory and former Continental army officer. In 1796, Reuben Harmon, an early settler in what became Weathersfield Township, purchased the springs. Although new settlers initially considered the springs an asset, the salinity of the water was too low to make the salt production profitable. In 1903, railroad tracks covered the once-famous salt springs. “Mahoning” is said to be derived from the Lenape word mahonink, meaning “at the [salt] lick.”

Salt Springs Road runs all the way from Austintown-Warren Road south of Warren to the west side of Youngstown, ending at the bottom of Steel Street. I grew up on the West Side  and often road my bike along there as a kid, in the shadow of the steel and industrial plants. We used to get pizza at Molly O’Dea’s. But I can’t say I ever had a clue as to how it got its name. It turns out, it was a vital early road connecting Youngstown and Warren to what they thought was a good source of salt, a critical resource. And it is a reminder of how our county and principle river got its name.

5 thoughts on “Growing Up in Working Class Youngstown — Salt Springs”