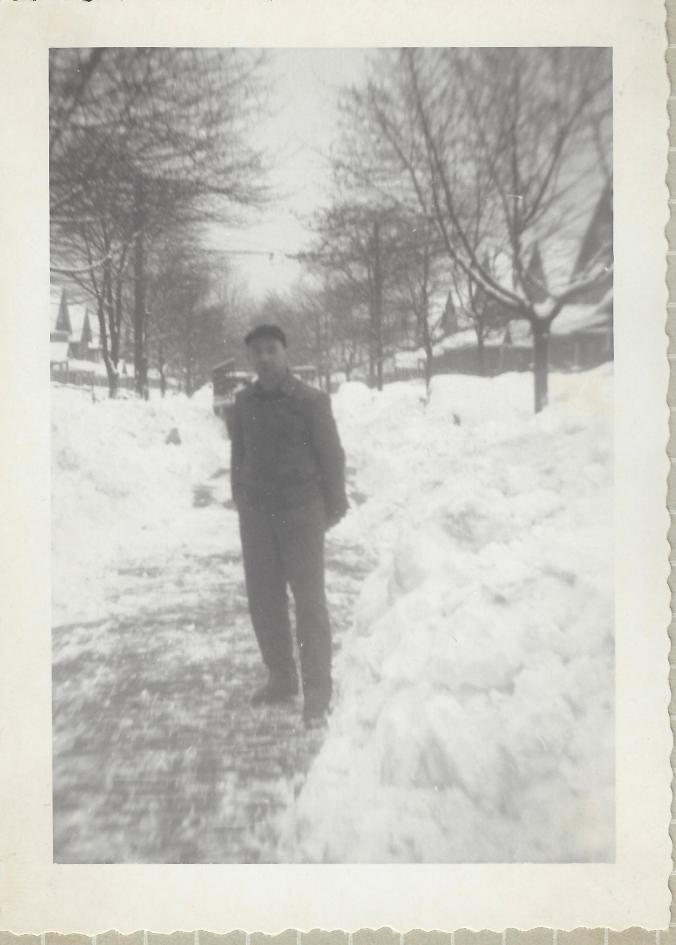 My father-in-law after the Great Thanksgiving Snowstorm of 1950.

The Great Thanksgiving Snowstorm of 1950 is one I don’t remember. I was not yet on the scene. The storm I remember was the Blizzard of 1978, probably because I was stranded in a dorm in Bowling Green for five days. I remember my parents talking about the 1950 storm and my wife shared this picture of her father in the aftermath of that snowfall.

The snowstorm was the biggest in Ohio history, and one of the most unusual weather events to ever occur in the United States. It snowed in the Youngstown area from late on Thanksgiving evening, November 23 through the 27th, dropping a total of 29 inches of snow on the Youngstown area. The 24 hour snowfall record in Youngstown of 20.7 inches was set over November 24-25 during that storm. Some areas got it worse. Steubenville received a total of 44 inches, the record snowfall for Ohio.

Two low pressure systems, one from the Great Lakes and one from the south concentrated just west of the Appalachians over western Pennsylvania and eastern Ohio, where the heaviest snowfalls occurred. For this reason it is also known as the Great Appalachian Storm of 1950. There were some weird occurrences. For example, at 2:30 pm on November 25, Pittsburgh had blizzard conditions and temperatures of 9º F while in Buffalo 150 miles north it was 54ºF with the hurricane force winds that prevailed over the east coast and New England. Perhaps weirdest was that this low pressure system slowly tracked west over the next several days before dissipating, blocked by an intense high pressure system over New England. That contributed to the massive accumulations.

According to Howard C. Aley, in A Heritage to Share, Thanksgiving afternoon and evening was almost spring-like. Weather forecasts for Friday were for “snow flurries.” Snow began overnight but wasn’t overly heavy Friday morning. It snowed steadily all day and by Saturday morning the Valley was buried in blizzard conditions. A state of emergency was declared in the city. The National Guard was called in and it was a priority to rescue those whose homes were facing roof collapses, and pregnant women due to deliver. All businesses were closed and estimated losses from lost wages, production, and snow removal totaled over $20 million. Regionally, over one million people lost power, 22 states were affected, and 353 people lost their lives.

Not everything ground to a halt. In Columbus, the annual rivalry between Ohio State and Michigan was played at Ohio Stadium in what became known as the “Blizzard Bowl.” I found this video clip of game highlights. Michigan won 9-3, gaining only 27 yards and not getting a single first down. Temperatures Saturday morning were 5ºF with 40 mile per hour winds. I don’t know how they played that game!

Bulldozers were used to clear the roads. Ohio’s governor declared Monday a legal holiday. Schools remained closed on Tuesday and many remained closed on Wednesday. The Vindicator did not publish for three days, getting a paper out on Tuesday. By Tuesday the 28th some of the main streets of Youngstown were dug out. As you can see from the picture above of my father-in-law, in residential neighborhoods often all they could do was clear a narrow path, just enough to allow emergency services in, or to get key personnel like doctors out.

All over Ohio, Pennsylvania, and West Virginia, there are people who remember that storm. Youngstown was just about in the epicenter where the two lows merged. It was a Category Five storm on the Regional Snowfall Index, the highest category (the Blizzard of ’78 was also a Category Five, the only one with a higher max RSI, though less snow). I kind of hope these two storms remain exceptional, having lived through the latter and from all I’ve read of the former.

If you remember the Great Thanksgiving Snowstorm of 1950, I would love it if you could share your memories!