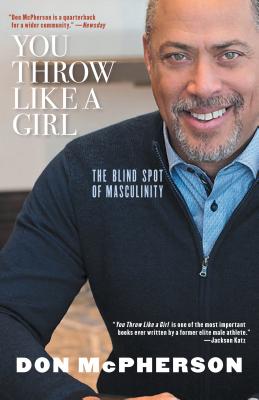 You Throw Like a Girl, Don McPherson. Brooklyn: Akashic Books, 2019.

Summary: Proposes that unhealthy masculinity arises from raising boys not to be women or gay rather than a positive model of what it means to be a man.

Don McPherson is a former NFL and CFL quarterback who works in the area of gender-based violence prevention. In this book, he observes what he believes to be the blind spot of “masculinity,” which is that we don’t train boys to be men but rather not to be girls — or gay. It is captured in the title putdown–you throw like a girl. It makes being a girl or woman inferior to being a man and results in a male culture of violence against women as inferior beings, with violence an assertion of dominance, of superiority. It also means closing oneself with emotional expressions that might be associated with being a woman–crying for example.

His book particularly explores the masculine culture surrounding sports and the incidence of violence against women by athletes, often in which the victim is blamed, and fans come to the defense of the beloved. He traces his own increasing awakening to this burden of toxic masculinity at age 29, when his salary was reduced as team owners devalued his playing utility. He reflected on his own sense of how he defined what it meant to be a man, and while not having engaged in sexual violence, recognized the ways he had objectified women and devalued them in conversations with other men, the privilege he had enjoyed, and how sport had defined his identity, and that this did not answer well to his own deep sense of what it meant to be a man, particularly one who valued close friendships with women.

He is forthright in his discussions that violence against women is a men’s issue, that men nearly always are the perpetrators of violence, and men have an important role in working with peers, sons, other youth, in developing a sense of being a men defined in character separate from deeming women inferior. He also exposes the silence and institutional support men often receive that enable them to escape the consequences of violence against women. Finally, he dares to name the pervasive presence of pornography, “the ‘streets’ in the pocket’ as reinforcing negative masculinity, rather than healthy, mutually caring relationships with women.

The thing that makes this book particularly compelling is McPherson’s personal journey, his honesty about how this culture of masculinity shaped his life, and the burden of this. His examples both from his playing days and in his violence prevention work call to mind in the male reader similar experiences, and the tough exterior one learns to put on to not be thought a sissy, a girl.

McPherson mentions in the book a publisher he pitched a version of this book to who wrote back:

Our concern about the book, however, is that those who agree with your message won’t feel the need to read a book in order to be convinced, while those who really need it would not buy one.

As I reflected, I still think this is a problem for this book, and part of my question was, “who was he writing for.” By his liberal use of gender theory language like patriarchy, privilege, and normalization in his book, it struck me as one written for the “woke” fellow-travelers in his work, those who didn’t need to be convinced. My challenge to the author would be to write a version of this book without the jargon as he would talk to a group of young men in a workshop, perhaps young athletes. I’d write it “I” to “you” rather than in academic third person.

I say this because the message of this book is important, but I do not think the men who McPherson would like to win as allies will read it. They might find his personal stories intriguing but when they hit the jargon, I suspect the defenses will go up, the book will get laid down, not to be picked up again. This is sad, because as men, we are doing a terrible job in our culture of helping boys make the transition to becoming men who are responsible, in touch with their emotional lives, and able to cultivate deep relationships with people of both genders, whatever their sexual or gender orientation, without abusiveness or violence. I hope McPherson will write a book for the men he actually needs to reach.

Disclosure of Material Connection: I received a complimentary advanced review copy of this book from the publisher via LibraryThing’s Early Reviewers program in exchange for an honest review. The opinions I have expressed are my own.