I grew up on the West Side and both sets of grandparents lived on the south side. My only childhood memory was one time when my grandparents took me there. I remember the lake, a play area, tree-lined walkways, and heavily wooded areas. In more recent years, while my parents were still living at Park Vista, we drove past Crandall Park and the Crandall neighborhoods, which offered glimpses of their grand past.

Crandall Park is named after Nelson Crandall, who made his and his family’s fortune working at Brier Hill Iron and Coal Works. He was the secretary for the estate of Governor David Tod, and later collaborated with Henry Tod and John Stambaugh in building the Tod House in 1870. When Youngstown was still a village centered around the downtown, Tod bought a farm north of the village, bordering on the Trumbull County line at Gypsy Lane that also included the land that would become Crandall Park proper surrounded by many of the stately homes that survive to this day.

Beginning in 1904 The North Heights Land Company and the Realty Guarantee Trust Company acquired the land and began development of the area. The Realty Trust donated the ravined area of Andrews Hollow, the portion west of Fifth Avenue becoming Crandall Park, named after the Crandall family. They extended Fifth Avenue north to Gypsy Lane and built a collection of some of the grandest homes in Youngstown along the roads surrounding the park and nearby areas, homes that would be the residences of industry magnates like Thomas Bray, president of Republic Iron and Steel, Frank Purnell, President of Youngstown Sheet and Tube, Edward Clark, president of Newton Steel, and George Brainard, president of General Fireproofing. Philip Wick, Myron Arms, Joseph Schwebel, and Joseph Lustig also owned homes in the area.

As far as Crandall Park itself, by 1925 the lake had been created, tennis courts and picnic areas built. A pavilion was built in 1930, and the picnic shelter in 1936. As the photo above indicates, the hills of the ravine provided a great place for sledding, and when the lake froze, a great place for ice skating. The shelter and the picnic areas offered many locations for family gatherings. The park vied with Wick Park for the honor of most scenic city park in Youngstown.

Most of us remember this area with memories like these. Like other parts of Youngstown, it suffered decline with the mill closures in the late 1970’s. Housing stock south of the park has decline more but the Youngstown Neighborhood Development Corporation has been working with neighborhood residents since 2014 to renew the area. The area has been designated the Crandall Park-Fifth Avenue Historic District. In 2017 the pavilion in Crandall Park was reopened after renovations.

One hopes this work continues. Grand homes, a beautiful park for community gatherings. Shaded streets and boulevards. A reminder of Youngstown’s grandeur, and perhaps a sign of hope for the future. 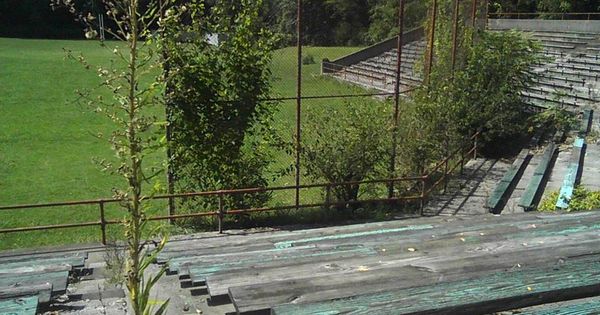 I used to basically live at Borts Field during my early teen years, and I was there nearly all year round. Once I and my buddies had gotten too big for the playground at the old Washington School, we’d go up to Borts and play pick up games of baseball in the spring and summer. Occasionally, if there was no room at Borts, we’d go over to Kochis Park which was nearby at Florence and North Lakeview.  When it was hot we’d spend afternoons, and sometimes mornings at the free swims at Borts Pool. In the evenings, we’d hang out watching baseball games and run over to Zitello’s for a pop between innings.

Later on, I played in a fast-pitch softball league of churches in the Youngstown area. We played at a number of the city parks including Ipes Field, Pemberton, and I believe Gibson and Homestead Parks, as well as many games at Rocky Ridge.

One summer, I met some girls from school, one who I was pretty interested in, who played tennis on the Borts Field tennis courts (one concrete and one clay). So I took up tennis, an interest which lasted longer than our interest in each other. Speaking of girls, Borts Field, on the hill overlooking the pool, was the site of my first kiss (a different girl, not the tennis player). That relationship didn’t last long either.

When the weather turned cool it was time for touch football, when the field was marked for football. That was probably the hardest time on my clothes–I’d often come home muddy. Then we moved on to basketball. I was never very good at this–not a good dribbler for one thing. Mostly, I’d pass the ball to someone who was a good shot.

Winter found me on the tennis courts again. The parks cover them with water so they would freeze over and we could ice skate. That’s where, after many falls, I learned to ice skate.

There were parks all over the city of Youngstown, in addition to Mill Creek Park. Crandall and Wick Parks on the North Side are perhaps the most scenic. Pemberton on the South side was a great place as well, with a tree-surrounded pool as I remember. My wife grew up across the street from Ipes Field, which also had a baseball field and stands (now crumbling as grown over as the above picture attests). In later years they installed tennis courts and my wife and I would play sometimes when we came back to visit her mother.

We both remember summer programs for kids at the parks. There were crafts, games, and even plays they would put on at the end of the program for the parents. I never actually participated but heard about it from other kids.

Much has changed over the years. Some places are crumbling. Mark Hackett, who allowed me to use the picture of Ipes Field, has albums of photos at the “Cool Stuff Long-Gone Near Youngstown, Ohio” Facebook page, including similar photos at Oakland, Stambaugh, Tod, and Gibson Fields. I suspect many of these had been built as WPA projects during the Depression. At the same time, the city continues to maintain a number of facilities throughout the city, according to this list on their website.

I would love to hear about the city parks you grew up playing at and your favorite memories.  If you are like me, you probably have lots of them!