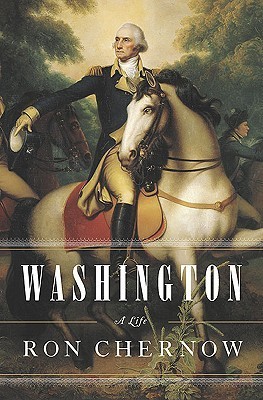 Summary: A one volume biography focusing on the character and emotional life and the qualities that enabled him to lead so effectively as general, in presiding over the Constitutional Convention and serving as first president.

Once again, winter found me working through a Ron Chernow biography, in this case, Washington, his study of the inner life and leadership of this Founder. Chernow’s contention is that Washington wasn’t the dull, stuffy figure he often is portrayed as, but a man of robust physical character, great ambition in both business and politics, and passionate in his affections–warm with family and trusted associates, flirtatious with women, and stern with his workers and slaves.

Throughout his life, he endured deplorable physical conditions on surveying trips, military expeditions, and travels, and even on his own farm, surviving numerous illnesses. Apart from his final illness, the more he was outdoors, the healthier he was. In battle, he was fearless, completely unconcerned by his own safety, and seemingly preserved by some kind of providence from harm. He was a magnificent horseman, usually entering a town on horseback, even as President. He paid careful attention to the tailoring of his uniforms, consciously aware of his appearance.

As a young officer under the British, he complained about unequal pay, sought promotion, and alienated the British. Over time, he learned to control his ambitions and his restraint and self-command seems to have been key in his command of others. Perhaps his greatest accomplishment in the War of Independence was not the battles he fought (apart from Trenton) but that he held the army together despite inadequate supplies and poor or non-existent pay, long enough for the French alliance to pay off at Yorktown. He was a man of few words among those who were far more verbose at the Constitutional Convention. His impartial work as President of the Convention and quiet diplomacy behind the scenes brought the process to completion.

A combination of well-timed deaths and inheritances, and enterprise in acquiring lands allowed Washington to amass develop Mt. Vernon, as well as extensive holdings in the Ohio country. His lack of self-regard, and devotion to national service meant few years of enjoyment, and the neglect of his properties to his great financial loss. Only as President did he accept a salary–defraying his own expenses in all the other positions he held. While a formidable leader trusted by all at first, he used all his abilities of tact and restraint to keep the disparate spirits of a Hamilton and Jefferson in harness for most of his presidency, even while criticized by both men and their partisans. He kept a country just getting on its feet from getting embroiled in foreign conflict.  One of the saddest things for him was that he could not prevent the rise of partisan divides.

Washington was a man of integrity and convictions. While Parson Weems tale of Washington cutting down the cherry tree and then confessing his crimes was not true, he was scrupulously careful with things like money and promises to care for his wards, even when this cost money that was in scarce supply. Equally, his strong convictions about America’s weak state under the Articles of Confederation and his persistent efforts to promote the Constitutional Convention and the ratification of the constitution contributed immeasurably to the success of these efforts.

Chernow portrays Washington as a man of passion. He could be deeply moved in speaking farewell to the country at the end of his presidency, and at other significant milestones. He was a ladies man who would count the number of women in the room and dance the night away with them. With two women, Sally Fairfax and Elizabeth Willing Powel, he had more serious flirtations, at least in letters. It appears that things never got further than that. George and Martha had a deep bond, and I wonder if she was shrewd enough to keep him in check, but never estranged. She stayed with him through the hard winters of the war and he deferred to her on many matters of social life.

Washington could be harsh on subordinates, demanding of them the meticulous attention and service he demanded of himself. He was estranged from long time friend Henry Knox when Knox had a lapse of diligence due to personal affairs during the Whiskey rebellion. He was hard on his overseers.

Washington reflected the dilemmas that have been inherent in our national life. He was disturbed by the treatment of Native Americans but had no compunctions about sending General Anthony Wayne to subdue the tribes in the Northwest Territory so settlement could proceed. He wrestled with slavery throughout his life as a plantation owner, vigorously tracking down runaway slaves while trying to be a benevolent owner. One exceptional mark of his integrity was that his will provided for the emancipation of his slaves, education of young slaves, and provision for elderly slaves–far ahead of other southern plantation owners. Washington also struggled with the sectional differences already present and the tension between the strong federal government proposed by Hamilton and the agrarian republicanism of a Jefferson. Given all this, I wonder whether would would have ever become the United States without him.

While Chernow gives us all the events of his life, he also offers us insights into the man, hardly perfect, but hardly the stuffy and dull figure we might consider him, alongside a Hamilton or a Jefferson. There certainly is warrant to the attribution to Washington of indispensability. He did what others could only build on in holding together an army, bringing together a Constitutional Convention, and establishing a strong presidency while relinquishing its power willingly and peacefully. He did this through courage, integrity, warm relationships, firmness and resolve, and even charm.

Chernow does all this with a flow of prose that seems to make 800 pages of text fly, leaving this reader not wanting it to end. When one reviews the acknowledgements, notes, and bibliography, it becomes apparent that he has woven extensive primary and secondary sources and other research skillfully into a flowing and fascinating narrative. After his work on Washington and Grant, I wonder who he will write about next. One thing I know, if I’m around, it will be at the top of my reading pile! 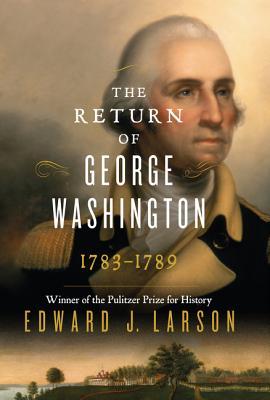 Summary: An account of the life of George Washington, between his retirement as General of the Continental Army in 1783 until his inauguration as the first president under the new U.S. Constitution.

In December of 1783, having successfully led the Continental Army to victory over and the departure of the British from New York City, George Washington stepped down as Commander in Chief to return to his plantation at Mount Vernon. On April 30, 1789, George Washington was sworn in as the first president of the United States, under a new constitution that created a much stronger federal government than had existed under the Articles of Confederation.

In this book, Edward J. Larson explores a period in Washington’s life often lightly covered by other biographies, the five plus years of Washington’s “retirement” from public life. Ostensibly, all Washington wanted to do is to develop his farms and realize a return on his investment in western lands. His own fortunes had suffered during the war and these were the years he hoped to have a chance to rebuild them. What Larson chronicles in this work is how Washington in both private and public ways continued to be active in American affairs, reflecting a deep concern for the development of the country he helped birth.

The concern began when he visited or attempted to visit his own western holdings, only to discover the inadequacies of government under the Articles of Confederation. There was no respect for property ownership or the rule of law, and the continued presence of native Americans prevented him from visiting one of his properties. Had he gone, he probably would not have survived. Efforts to develop navigation on the Potomac exposed another weakness, no effective governance of interstate commerce in what was basically a confederation of sovereign states and a weak national government.

It was clear that the new country’s survival was imperiled unless the Articles of Confederation could be modified or replaced. Washington became a correspondent with others across the former thirteen colonies who recognized the need for a stronger form of government. These concerns led to the authorization of a Constitutional Convention in Philadelphia in 1787. The question was whether or not Washington would attend, and likely, preside. Larson describes the dilemma he faced, to go with the risk of possible failure, or to remain home and doom the convention to likely failure. He went, and presided.

One sees the wisdom of Washington and the framers in establishing and enforcing a “gag rule” that prohibited discussing deliberations outside the convention. This allowed for ideas to be proposed that might have been quickly shot down. Larson traces Washington’s crucial work at several critical impasses, particularly around the tensions over representation between large and small states.

Washington continued to exercise an important, but behind the scenes role during ratification, working with key contacts on political strategy in key states like Pennsylvania, New York, and his own Virginia, while staying in the background as the presumptive nominee for president, which everyone expected, including Washington, as much as he longed for his plantation.

Not everything in this account is glowing or fits our idealized picture of Washington. George and Martha Washington, between them, owned over 300 slaves and his own involvement in slavery was reflected in the treatment of the Three Fifths Compromise in terms of representation, and the fugitive slave clause (Article Four, Section 2, Clause 3). Only on his death did he release his (not Martha’s) slaves. Likewise, Larson makes clear that from about the beginnings of the Revolutionary War on, Washington ceased to take communion, or believe in the deity of Christ. He believed in a God, and in divine providence, but even the minister closest to him knew of “no fact which would prove General Washington to have been a believer in the Christian revelation.”

Larson makes a strong case in this work that Washington was the “indispensable man” not only in the war, and in establishing the presidency, but also in the forging of a constitution that created a strong federal system. He helped cultivate the growing consensus that there was a need for a new constitution. He was perhaps the one person convention delegates would trust to preside. He stayed in touch with key figures in the states during the ratification process. It might be argued that Article Two that described the Presidential powers particularly had Washington in mind. Even in “retirement,” Washington recognized how important was establishing a system of government that ensured respect abroad, prosperity at home, and westward development. Larson shows how Washington, reluctantly perhaps at times, acted to make these three critical priorities possible.