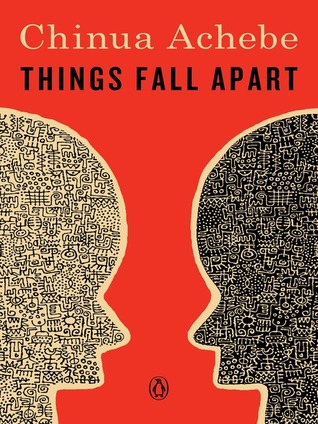 Summary: First of a trilogy portraying the confrontation of Igbo tribal culture and Christian missions and British colonialism.

Chinua Achebe described his youth in Nigeria as growing up “at the crossroads of cultures,” speaking Igbo at home, and English at school. In Things Fall Apart, Achebe portrays the initial intersection of these two cultures. He does so through a rising tribal leader in the village of Umuofia, Okonkwo. The story unfolds in three parts.

The first simultaneously develops the character of Okonkwo, and the sophistication of Igbo culture. Okonkwo grows up in reaction to a “devil may care” father, Unoka, who gains no titles, dies in debt, and in the Evil Forest of a swelling in the stomach, left unburied. Okonkwo strives for a different destiny. He wins a legendary wrestling match, is successful in farming yams, the staple crop, acquires three wives, and two of the four titles leaders in the village may obtain. He is a rising tribal leader.

Factors inward and outward keep unraveling this vision. He becomes the adoptive father of a hostage boy, Ikemefuna, who represents the qualities his own eldest son, Nwoye, lacks. Eventually, the tribal elders decree his death. Okonkwo is given the opportunity to not participate, yet he ends up striking the death blow, to not be thought weak This act shatters his relationship with Nwoye, who had also become close with Ikemefuna. Meanwhile, he has a daughter, Ezinma, who when near death, he heals and has the character he hoped for in his sons. The first part ends with a second death, when Okonkwo fires his gun during a wedding celebration. The gun explodes, a sixteen year old boy dies, and he is forced into exile with his family.

Part one also describes tribal life, its social customs, its healing practices, its commerce, its ways of resolving conflict, and the ways weddings are negotiated. It is obviously very different from European culture, and their are elements that would not be understood by outsiders, like exposing twin babies in the Evil Forest. But it is sophisticated, providing ways for men and women, and neighboring tribes to navigate their relationships with each other.

Part Two describes Okonkwo’s life in exile. He is supported by his friend Obierika, rebuked and encouraged by the members of his mother’s family, and nourished on the vision of how he will re-establish himself when he returns to Umuofia. It is during this time that Christian missionaries arrive in Mbanta, where he is living in exile. For the most part, they are an object of derision, except for the outcasts who are raised up. More significantly, the alienation of Okonkwo and his son, Nwoye is completed when Nwoye converts. Achebe describes the change that occurs in Nwoye:

“It was not the mad logic of the Trinity that captivated him. He did not understand it. It was the poetry of the new religion, something felt in the marrow.. The hymn about brothers who sat in darkness and in fear seemed to answer a vague and persistent question that haunted his young soul–the question of the twins crying in the bush and the question of Ikemefuna who was killed”

The church remains on the margins in Mbanta while Okonkwo throws a farewell feast in grand style.

Things are different back in Umuofia. There the mission work and the British who have come with them have made much greater inroads. The Reverend Brown, realizing that the traditional beliefs are strong, opens a school and a hospital. Tribal sons learn to read and write the language of the English and learn the stories of Christianity as they do. The medicine of the hospital is more powerful than tribal remedies in healing. The local trading post pays high prices for their palm oil. Their courts and officials establish English laws that resolve conflicts differently, and hang those who take lives. Okonkwo sees how these changes are undermining the tribe and tries to mobilize resistance, particularly when a different missionary takes a less irenic and a more culturally insensitive approach. As the title suggests, “things fall apart,” both for Okonkwo, the tragic hero, and the tribe.

Achebe’s portrayal helps us understand that the Igbo were not “savages,” but had a rich culture. Yet he also doesn’t dismiss the compelling character of the Christian message, particularly as it is portrayed in the words and deeds of Brown, who is highly respected, and respectfully discusses theology with tribal leaders who disagree with him. He gains through goodness. More troubling is the partnership between the missionaries and the colonial power, determined to subdue the tribes to colonial rule. The power of this novel is that it doesn’t resort to a simple binary of saying tribal life was good, the coming of Christianity bad, or the reverse. Rather, he portrays both the nobility and and fallibility of the people and institutions in both cultures, and the transition from one way of life to another, welcome by some, wrenching for others. Most of all, he helps us see all this from the perspective of the supposedly “primitive tribes” who were “pacified,” the title language used by the colonial commissioner for the book he was writing. He helps us see that these tribes were far from primitive, and that their encounter with colonialism was far from peaceful.