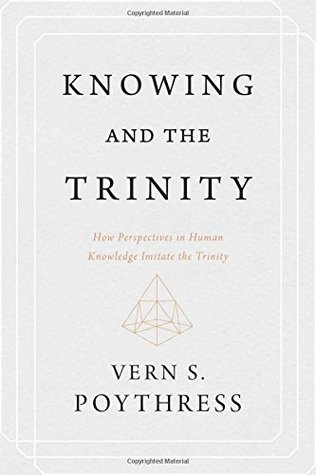 Summary: How various triads of perspectives on both God and the world reflect the Triune God.

John Frame and Vern Poythress are Reformed theologians who have worked together in developing a multi-perspectival, more accurately, tri-perspectival approach to knowledge. This work by Poythress represents, perhaps, the most complete working out of these ideas.

Fundamentally, humans beings are limited to a particular perspective but divine revelation makes it possible to see truth from multiple perspectives. Both Frame and Poythress speak in terms of triads of perspectives which they believe are grounded in the Trinity. One triad on God’s Lordship, for example considers the perspectives of authority, control, and presence, relating to Father, Son, and Holy Spirit.

Therefore the first part of this work considers what perspectives are and the types of perspectives that might be identified. Then Poythress moves on to a discussion of the Trinity. A couple of key truths in this discussion that will recur in the book is the coinherence of the Trinity, and the idea of analogy, and that analogies can reveal something both of God and the world because the world reflects or is an ectype of the character or archetype of God. Part three then turns to perspectives on reflections, Trinitarian analogies, ethics, Lordship, and office. In each of these a triad of perspectives are related that coinhere and relate to the persons of the Trinity.

I find the basic idea of tri-perspectivalism intriguing, particularly in thinking about how the world and even our knowing may reflect the triune nature of God. I must confess however that the logical working out by Poythress can get confusing at times when he writes about perspectives on perspectives or triads within triads. The diagrams in the text are critical if one is to have any hope of keeping it all straight (alas, my e-galley version did not have these–a major barrier to understanding the architecture of tri-perspectival thought Poythress is erecting and very logically delineating). Throughout, he both derives triads of perspectives from prior triads, and recurs to earlier triads in applicative discussions.

Perhaps the best part of the work is that Poythress is devoting himself to the classic work of the theologian of thinking great thoughts about God rooted in God’s revelation of God’s self. While one encounters a good deal of close reasoning, it is quite apparent that for Poythress, God never remains an abstraction, with many chapters ending in a paean of praise for God in all of God’s glory.

This is a work to be studied slowly and carefully, pen and notebook in hand. Each chapter ends with a series of questions as well as key terms that may be found in a glossary at the end of the book. The questions force one to review chapter content and formulate one’s understanding of the material. This rigor of theological thinking may not be something all are given to, and not all will appreciate Poythress’s approach. But for those who give this the time it properly demands, they will be ushered into thinking deeply and long about the Triune God. One might well ask, particularly for those who lead and teach God’s people to know and follow the living God, whether or not this is essential work that cannot be neglected.

Disclosure of Material Connection: I received a complimentary review copy of this book from the publisher via Netgalley in exchange for an honest review. The opinions I have expressed are my own.

I finished the year reading a variety of well-written books from Beowulf to the fiction of Ann Patchett to my son’s new techno-thriller. I worked my way through John Frame’s magisterial treatment of western philosophy and theology, as well as two very different but thoughtfully written books on sex.  I read a collection of essays on the greatness and the goodness of God, and a description of the wonder of the human body from an evolutionary perspective that left God out of the picture. I read two books with very contrasting perspectives on the state of the American academy and mind. It seemed a month, at least in some cases, where my books argued with each other and I was the richer for it. So here are the books I reviewed in December with links to the full reviews:

Bel Canto, Ann Patchett. New York: Harper Perennial, 2005. An international group gathered in a South American country for a dinner party to celebrate a Japanese industrialist’s birthday are taken hostage in a failed attempt by a revolutionary group to seize the country’s president. When months pass without a resolution a strange, an oddly wonderful community develops among hostages, and captors, one strangely forgetful of the inevitabilities of a hostage situation.

The Spirit of the Disciplines, Dallas Willard. San Francisco: Harper & Row, 1988. Dallas Willard’s classic work explaining why and how spiritual disciplines are vital for transformation into the character of Christ as his disciples.

The State of the American Mind, Mark Bauerlein and Adam Bellow eds. West Conshohocken, PA: Templeton Press, 2015. The contributors in this volume chart the factors contributing to and consequences of what they see as a declining intellectual life in the United States.

A History of Western Philosophy and Theology, John Frame. Phillipsburg, NJ: Puritan and Reformed Publishing Company, 2015. A survey and critique of the major philosophers and theologians of the West beginning with the Greek philosophers and early church fathers up to the present day, written from a reformed perspective.

What’s Liberal About the Liberal Arts?, Michael Bérubé. New York: Norton, 2006. This is a spirited defense of liberalism and the liberal idea by a literature professor against accusations of “liberal bias”. The argument includes extensive description of the author’s own classroom practice.

Surreality, Ben Trube. CreateSpace Independent Publishing Platform, 2015. The murder of Franklin Haines in virtual reality is paralleled with the real theft of $80 million from him. A prostitute is missing, a deadly gang that operates in both cyberspace and the real world threaten murder and mayhem, and Detective Dan Keenan, his real world and virtual world partners and a penguin named Tux work together to find the real criminal behind this web of crime. [Ben Trube is my son.]

Redeeming Sex, Debra Hirsch. Downers Grove: InterVarsity Press, 2015. Hirsch explores how the church ought engage society around issues of sexuality, discussing the connection of spirituality and sexuality, the nature of gender, orientation and our sexuality, and how the church holds in tension the image of God in people and the ethics of various sexual expressions.

Church for the Fatherless, Mark E. Strong. Downers Grove: InterVarsity Press, 2012. Mark Strong chronicles both the crisis of fatherlessness in our society and the vital role the church can play in equipping fathers and caring for the fatherless.

Divine Sex, Jonathan Grant. Grand Rapids: Brazos Press, 2015. Jonathan Grant argues that a powerful “social imaginary” shapes sexual expression even within the Christian community and only communities that live and articulate a “thick” alternative vision can hope to have a formative influence on the lives of Christian disciples.

The Incredible Unlikeliness of Being, Alice Roberts. New York: Heron Books, 2014. An evolutionary account of human embryological development from even before conception through birth  and of human anatomy and its evolutionary antecedents.

Best book of the month: Beowulf gets the nod just barely over Bel Canto. I was captured by the power of Seamus Heaney’s translation as well as the profound richness of the story itself.

Best quote of the month: Again, I am going to go with Beowulf. Hrothgar’s warning to Beowulf is one all of us do well to heed:

“O flower of warriors, beware of that trap.
Choose, dear Beowulf, the better part,
eternal rewards. do not give way to pride.
For a brief while your strength is in bloom
but it fades quickly; and soon there will follow
illness or the sword to lay you low,
or a sudden fire or surge of water
or jabbing blade or javelin from the air
or repellent age. Your piercing eye
will dim and darken; and death will arrive,
dear warrior, to sweep you away.

On the TBR pile: Among the books I’m reading or anticipate reviewing in the coming month are Wallace Stegner’s fictional biography of Joe Hill, an early labor organizer, John Walton’s book on Genesis 2 and 3, R.C. Sproul’s book on Matthew 24, an account of the eruption of Mt. St Helens and a memoir of theologian Tom Oden and Jon Meacham’s biography of George H.W. Bush.

Thanks again for following the blog in 2015 and, if you get a chance, let me know about something good that you have read!