Summary: First in a series of eleven novels, introducing the character of Lanny Budd, a precocious youth on the eve of World War 1, his German and English friends and their respective fates during the war while Lanny divides his time between his glamorous mother and artist step-father on the Riviera, and in New England with his father’s Puritan munitions-making family, ending up as a secretary to a geographer at the Paris Peace Conference.

Several months ago, I read and reviewed A World to Win, number seven in the Lanny Budd novels. There, a decidedly adult Lanny Budd functions as a secret agent for the president (Roosevelt) during World War 2. This novel, the first in the series, introduces us to Lanny Budd on the eve of World War 1. Raised by Beauty, his mother, he grew up in the mix of art and culture of Paris and the French Riviera. Although she was a preacher’s daughter, she was rejected by Lanny’s father’s New England Puritan family because she had posed several times in the nude for Parisian artists, and never married Lanny’s father. He acquires the artistic tastes and cultured manners of his mother’s circle, and the savvy of his munitions-salesman father. He also acquires two friends at boarding school, an English boy named Rick, and a German boy of high birth named Kurt. Like other pre-pubescent teens, their discussions range from philosophy to the mysteries of girls.

All this ends with the onset of the Great War. Rick eventually ends up as an RAF flyer, married, and wounded, never to walk without pain. Kurt fights for Germany and eventually becomes involved in espionage at war’s end that catches up Lanny. Beauty retreats to the Riviera, marry an artist, Marcel Detaze, whose greatest work comes after he is severely wounded, before he returns to the front, never to come back. Lanny has his first love affair with a girl destined to marry into an English house, and his first heartbreak.

After assisting his father for a period, learning to code and decode documents and meeting numerous famous figures, even Zaharoff, his father’s main competitor, he returns with his father to New England, meeting his stern old grandfather, his very correct step-mother, and an enlightened old great grandfather, who kept company with the New England transcendentalists. He is used for his connections by another woman, and returns with his father to Europe wiser and sadder.

Due to language skills and his savvy and facility in meeting the rich and powerful, he serves as a secretary to a geography professor who is part of the US delegation to the Paris Peace Conference. He witnesses the high public ideals of the Fourteen Points, and the private maneuvering among Wilson, Clemenceau, and Lloyd George, for land and oil and the utter subjugation of Germany. At a point of disillusionment, he dabbles with Kurt and the socialists in a dangerous set of liaisons.

Sinclair portrays Budd against the backdrop of the Great War–the folly of the great powers who stumbled into this conflict, and eventually drew in the US. Lanny’s father tries to keep him out of it all, even as his company profits greatly, as do all the munitions manufacturers. He gets an education in the power politics, and the business interests that profit by war. This sets up a tension for Budd, raised among artists and caring for the fine and noble things of life. Does he join his father in an enterprise even his father approaches with cynicism, or pursue another path?

Budd also meets the socialists, and those who have ties to the revolution in Russia, through a socialist uncle, Beauty’s brother and becomes aware of the ways the rich exploit workers in every country. Lanny’s father tries to protect him from such influences as well. In this first novel, we see the tensions and influences at war in Lanny, while the world is at war. Sinclair sets us up for succeeding novels in introducing us to Lanny, able to travel with and identify with artists, the wealthy capitalists, even the socialists, moving through all these circles. We wonder if he really belongs to any of them.

If there is any criticism to be laid to this novel, it is that it seems more preparatory than anything to the stories to follow. The war and the Peace Conference really are the plot, with a bit of suspense toward the end around his relationship with Kurt and his uncle. But the book serves as a great summation of World War 1 and what pre-war Europe was like. It portrays the tragedy of Paris and Versailles that made the second World War inevitable and carved up the Middle East in ways that are still having repercussions. We glimpse the graft and folly behind noble statements and patriotic sentiment. And, similar to “Pug” Henry in The Winds of War, we wonder at what famous events, and with what famous people, Lanny will turn up next. 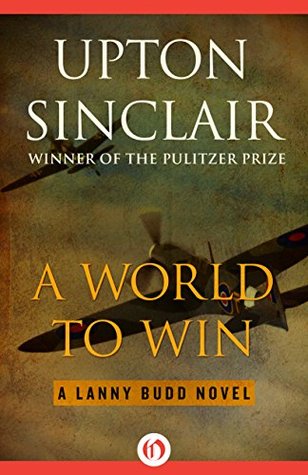 Summary: Presidential Agent 103, in the guise of an art dealer, embarks on a series of journeys, planned and unplanned, in which he gathers significant intelligence for the Allied cause in its fight against Nazism.

Most of us know Upton Sinclair as the author of The Jungle, an expose’ of conditions in Chicago meat packing plants at the beginning of the twentieth century. I was unaware that he was author of the Lanny Budd series of eleven novels, named after the primary character, the son of an American arms dealer, a gentleman of tact and insight who moves among the major figures of the first half of the twentieth century, and eventually becomes Presidential Agent 103, using the cover of a fine art dealer to travel into occupied France and Germany to gather intelligence against the Nazis critical to the allied threat. The third book in the series, Dragon’s Teeth won the 1943 Pulitzer Prize for Novel. The series went out of print for years only to recently be resurrected by Open Road Media.

Some of you may remember The Winds of War by Herman Wouk. The main character of that book “Pug” Henry was also an adviser to Franklin Roosevelt and met with a number of world leaders. Reading A World to Win, I couldn’t help but wonder if Wouk had drawn his inspiration, consciously or not, from this work, published 25 years earlier. In the course of this novel, Budd meets with Marshal Petain, Hermann Goering, Rudolph Hess, Adolph Hitler, alludes to meetings with Churchill, hobnobs with William Randolph Hearst, is entertained by the widow of Sun Yat-sen, meets Mao Tse-tung (Mao Zedong), and finally, at the end of the novel, Joseph Stalin.

After each of his forays, including a kidnapping by underground forces who suspected him of Nazi ties when he was actually on their side, escapes from Luftwaffe bombings, and other perils including a near fatal plane crash, he has late evening meetings in the bedroom of Franklin Roosevelt where P. A. 103 is debriefed. During one of these, he even gives Roosevelt the words, “the arsenal of democracy,” that Roosevelt used in one of his famous speeches! This incident underscores Budd’s singular ability to endear himself to whoever he is with, even those he inwardly despises, like Hitler, and keep them persuaded that he is nothing other than a disinterested art dealer.

At the same time, Budd’s endearing qualities draw him into affairs of the heart with two women. Lizbeth is the young daughter of a Baltimore industrialist, beautiful but incapable of anything beyond conventional conversation on conventional subjects. Laurel Creston, her cousin is a socialist-leaning anti-Nazi journalist who Lanny helped escape from the Gestapo, and easily his intellectual equal. While on his “missions” for the president, he refuses to consider either, given his dangerous lifestyle. But when “furloughed” after the plane crash, which also destroyed his “cover,” he finds himself in a different place.

Things get even more interesting when Lanny gets invited on a cruise to Hong Kong (where a psychic had predicted Lanny would die) by Lizbeth’s father. Laurel also manages an invitation, leading to an interesting predicament. Who he ends up with, how they escape the Japanese invasion of Hong Kong, and how they end up meeting Mao and Stalin, I will leave you to discover.

One detects in the book Sinclair’s life and interests–Baltimore where he grew up, interests in psychics and spiritualism, and socialist leanings, which characterize Laurel, and in a more chastened form, Lanny himself, despite his loyalty to Roosevelt and to his arms manufacturer father.

While the idea stretches credulity that Budd could somehow manage to meet all these great personages in one novel, and end up traveling around the world, the journey is rip-roaring good fun. The closest this seemed to me to get to a plot was the recurring allusions to Budd’s death in Hong Kong, fantastic at best, until Hong Kong becomes a cruise destination and we realize that his arrival date coincides with the attack on Pearl Harbor and Japan’s invasion. At the same time, there are seasons of reading when one does not particularly care as long as the book keeps your attention.

I should say that I started this series with this book which is number seven, which happened to be available at a discount in e-book form. It was definitely good enough that I want to go back and read the series from the beginning. If that sounds interesting to you, Open Road has a page showing all eleven novels in their proper sequence, and other Sinclair works, with links to purchase them in different e-formats.