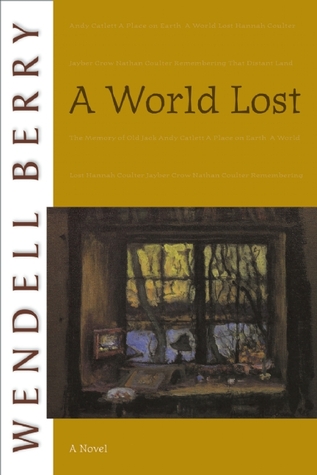 Summary: Young Andy Catlett’s life is forever changed the day his namesake Uncle Andrew is murdered, an event he spends a lifetime trying to understand.

Andy Catlett is nine years old on the summer day when his adored Uncle Andrew refused to take him on a job salvaging material from an old building. Otherwise it is a perfect day with a satisfying dinner with grandparents, meandering across farm fields, quenching his thirst at a cold spring, watching insects and a world alive, and swimming in a pond to cool off, even though it was forbidden. He arrives home that evening in 1944 to be told by his father that Uncle Andrew had been shot twice by the ill-tempered Carp Harmon. Shortly after he dies.

It is like a long swath of fabric being torn out of a favorite shirt for all of them, never to be repaired. He tells of being with his grandparents and father one night, all of them in tears as they think of what they’ve lost. And shortly after, grandfather dies. Andy’s father no longer plays songs on their piano. We learn how close his disciplined, responsible father came to savage revenge. Something had been snatched out of their world that left it irreparably changed. As the title states, a world lost.

But who was the beloved uncle, brother, son, and why did Carp Harmon kill him? Andy spends the rest of his life trying to understand these things and this novel is his narrative of both discovery and lingering questions. Uncle Andrew was the strong, handsome ladies man who married into the town’s elite, only to live in a loveless marriage with a hypochondriac wife and demanding mother-in-law. He struggled financially, drank too much, and was trying to put his life back together with his brother’s help. This complicated man was the uncle Andy adored.

He interviews witnesses to the murder, reads news stories, and trial records. None of it fully makes sense and often seems contradictory. Even the accounts of whether Uncle Andrew had done anything to provoke the murder conflict. Letters in his father’s effects, shed little more light. It was senseless, as all murder is senseless. He wonders sometimes if things would have been any different had he been with Uncle Andrew that day.

This is the narrative of any family who has suddenly lost someone by violent means. Life may go on but it can never be the same. We discover the complicated mystery of the one we have loved and lost, the shades of light and dark that comprise the portrait of a life, and the ambiguities that fail to resolve. We wrestle with making sense of the senseless–and fail. We carry our own private grief, guilt, perplexity, and trauma, hidden to the world but never far from mind.

Wendell Berry, in his measured way, unfolds this exploration of a world lost in the context of the Port William membership we’ve met in other novels. We have the familiar backdrop of the web of relations and the care of the family farms and the work that must be done that reminds us of the tension of darkness and life within which we live. Berry captures that tension in the narrator’s concluding reflections:

“I imagine the dead waking, dazed, into a shadowless light in which they know themselves altogether for the first time. It is a light that is merciless until they can accept its mercy; by it they are at once condemned and redeemed. It is Hell until it is Heaven. Seeing themselves in that light, if they are willing, they see how far they have failed the only justice of loving one another; it punishes them by their own judgment. And yet, in suffering that light’s awful clarity, in seeing themselves within it, they see its forgiveness and its beauty, and are consoled. In it they are loved completely, even as they have been, and so are changed into what they could not have been but what, if they could have imagined it, they would have wished to be.

“That light can come into this world only as love, and love can enter only by suffering. Not enough light has ever reached us here among the shadows, and yet I think it has never been entirely absent.”

How good it was. How much we’ve lost. These two phrases seem to capture the gist of so many of the online conversations I’ve had with present and former Youngstowners since starting this series of posts.

On the one hand, so many of us, especially those of us who grew up in the 50s, 60s, and 70s, share these incredibly rich memories of working class Youngstown ranging from good jobs to healthy neighborhoods to close extended families to a surprisingly rich cultural life ranging from ethnic festivals to classical concerts, from baseball and bowling leagues to art shows at the Butler.

On the other hand, even with all the efforts to create a “new” Youngstown, we live with a communal grief for what has been lost–from the skies aglow with steel-making, to summers at Idora Park, to the sadness when we visit the neighborhoods of our youth to find an abandoned house or vacant lot where we once lived. It is not a simple thing to occupy, let alone maintain all that housing stock when you’ve lost 100,000 of your people.

I could go on but what I would rather focus on is what we still have, whether we are living in Youngstown or are part of the “Youngstown Diaspora.” What I’ve discovered as I’ve written and interacted and reflected is that having grown up in Youngstown, there are things we carry with us. You may take us out of Youngstown. You can’t take Youngstown out of us.

I could go on, but I think you get the point. There is so much we carry within us that has not been lost. But it can be if we keep it within because none of us lives forever. The best of our heritage can live on if we share it with our children, and bring our best into our communities, our places of worship, and our work.

Writing this series has been a fun project with a serious purpose. The experiences and memories that we’ve shared and enjoyed together are things that have shaped us. I think much of that is profoundly good–good to remember if we are seeking the peace and prosperity of Youngstown–and good to be mindful of and draw upon wherever we find ourselves.

Read all the posts in the Growing Up in Youngstown Series by clicking the “On Youngstown” category link either at the top of this page or in the left column of my home page.

Good grief sounds like an oxymoron. Only a disturbed person relishes loss. Grieving, whether we face the loss of a person, a job we love, a situation in life or a diminishment of our own capacities, comes with a number of emotions, none of which are pleasant–sadness, depression, anger, confusion and more. Yet Rudy’s message on Sunday proposed that we can grieve well. Is this really possible?

Before we get to that question, I want to acknowledge that Rudy helped me see something more clearly than I had before. It was that because we were created originally to live eternally and not die, we often plan and live for permanence and not loss. We think of being best friends forever, of putting down lasting roots somewhere, of things always being the way they are. Ecclesiastes 3:11 says, “He has made everything beautiful in its time. He has also set eternity in the human heart; yet no one can fathom what God has done from beginning to end.”

A good friend observed to me that the first half of life is about acquisition and achievement whereas the second half is about loss. Somewhere along the way, we confront the impermanence of life and that “the center doesn’t hold, things fall apart.” And the challenging question we face is whether the grief of loss is just the gateway to a despairing view of life. Perhaps this is why we try to assuage grief and rush the process because to face it honestly means facing the hardest questions about life.

As Rudy talked about, it all comes back to Jesus and our resurrection hope in him. If Jesus truly came back to life, there is indeed a basis for hoping against hope that there is something beyond the ultimate of all losses–the death of others and our own death. Trusting in his promise, we can face the hardest realities of loss and name them and then realize that Jesus and not loss or death has had the last word. There is a life and a restoration of creation in which we encounter the realization of all our hopes–not only of life everlasting, but of real relationship with those in the Lord we have lost and real work that bears lasting fruit in a creation that is renewed.

How does this help us grieve well? It enables us to have the courage to name our grief honestly with all the emotion that comes with it.  It enables us to allow the journey of grief to take its time with us rather than feeling we must manufacture “all better” feelings when that’s not true. And it enables us to lean into the comfort of God’s promise even when we don’t feel God’s presence.

Loss really doesn’t seem the way life is supposed to be which makes it so hard. The promise of the gospel doesn’t mean an escape from grief but rather that grief needn’t be suppressed nor end in despair–there is hope and light on the other side of the dark night that gives us courage to walk in the valley of the shadow of death and loss.