Open Hearts in Bethlehem: A Christmas Drama by Kenneth E Bailey
My rating: 4 of 5 stars

If Kenneth Bailey is right (and I believe he is) I need to revise my mental images of the birth scene in Bethlehem. The manger scene in our living room is inaccurate because it places the birth in a stable.

We’ve grown up with the narrative that there was “no room in the inn” and then assumed that the “manger” in which Jesus was laid was in a stable. Bailey argues first of all that the normal word for inn (pandocheion) is not used here but rather a word (katalyma) that is most accurately translated (as does the NIV in Luke 2:7) as “guest room”. Bailey observes that this refers to a room in most homes of the time that would be used for visiting guests while the family occupies the main room. Second, he contends that in most of these homes there was an area off of the main room, sometimes slightly lower, where animals were brought in for the night. It would have been easy to move a manger for a small animal to the main room to serve as a bed for the baby. 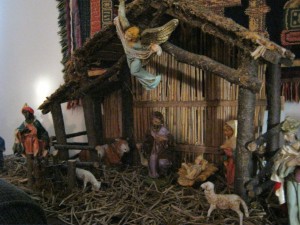 Furthermore, Bailey’s explanation gets at a mental objection I’ve always wondered about. It is basically along the lines of “how heartless can Bethlehem be if a town won’t house a relative ready to have a baby?” Furthermore, anyone who knows about Middle Eastern hospitality, knows that this flies in the face of everything that is good and decent and expected. Bailey contends that in fact, the real picture in the biblical narrative is one of relatives who are already hosting visitors in town for the census who open up their home even further to make room for their relatives in need–and so in fact open up their hearts to Messiah Jesus.

Bailey introduces all of this at the beginning of his “Christmas drama” which is built around his explanation of what most likely actually occurred on the basis of both custom and the biblical narrative. The drama that follows struck me as an understated account of how a couple, Benjamin and Judith, respond to the demands of hospitality. There is the practical question of whether to bring the animals in and the decision to do so with so many strangers in town. Most riveting for audiences is the scene where Joseph and Mary arrive outside the home and call out requesting hospitality. We see the real choice of a Herod-fearing people between fearfulness and welcome and what happens in this home, as well as with some neighboring shepherds, when this family opens not only home but hearts to Joseph, Mary, and the child that is soon born to them.

The drama is written to serve as a church nativity play and includes stage directions and program materials which may be used without permission for non-profit purposes if certain criteria (including purchase of twelve scripts and no admission fee) and suitable credit is given. There are also several songs in the drama for which a musical score and CD is available from the publisher.

This review probably comes too late for Christmas celebrations this season. However, churches may wish to consider this for the future because of the crucial question it poses to both cast and audience: is my heart open for the coming of Jesus?

View all my reviews