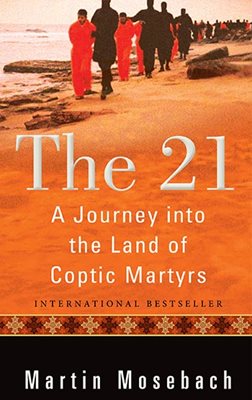 The 21: A Journey into the Land of the Coptic Martyrs. Martin Mosebach, translated by Alta L. Price. Walden, NY: Plough Publishing, 2018.

Summary: An account of the background and faith of the twenty-one men martyred on a Libyan beach by ISIS, profiling their village, family, the Coptic faith, and the challenges of living as a minority religion throughout history.

Twenty-one men in orange jumpsuits walk single file along a Libyan beach, each accompanied by a hooded figure clothed in black. They are forced to their knees with a figure in black behind each, holding their color with one hand, the other hand on a sheathed dagger. Then the speech “The Message Signed with Blood to the Nation of the Cross.” Then back to the kneeling men, who in the last moments of their lives softly pray, “Ya Rabbi Yassou!” (O My Lord Jesus!). The video resumes, twenty one decapitated bodies, heads laid on their backs.

With this, twenty Coptic migrant workers and a Ghanaian Christian who had joined their company, become martyrs and saints. Icons are printed of each with the martyr’s crown. Their remains become sacred relics.

Martin Mosebach traveled to Egypt to explore the families, the village, the land, and the faith associated with these men, a group he refuses to call “victims”  because “they had a strength that granted them a well-protected inner core of independence, and I was convinced their murderers cruelty couldn’t penetrate that deep.”

He begins with a dialogue on martyrdom with a “doubter” exploring what to many of us is the strange phenomenon of people who accept the consequence of death out of love for Christ. Mosebach then takes us on an exploration of the culture out of which these men came. He interviews the bishop of these men and discusses the history of oppression and martyrdom etched deeply into the Coptic Church. He visits first their pilgrimage church, and then their village El-Aour, in upper village. We meet their families, most in new homes because of assistance by the Egyptian government. We hear of men who were good sons, husbands, and people of integrity and piety, yet ordinary young men. One, after hearing a sermon about martyrdom said, “I’m ready.” We meet Fathers Abuna and Timotheus, who had ministered to the migrant workers in Libya until it had become too dangerous. They tell of this group sharing a single room to send more home to their families, their readiness for martyrdom, and Issam, who especially seemed to play a role in strengthening the resolve of the others.

The latter part of the book goes more deeply into the Coptic Church, the liturgy that shaped them, their special connection with the flight of the holy family into Egypt, the church hierarchy that mirrors the heavenly hierarchy of angels and archangels, the cloisters. We also zoom out to the larger context of Egypt and the cave churches of Mokattam next to the garbage mountain, old and New Cairo, and the minority that calls itself “The Church of the Martyrs” in a time of increasingly tenuous relations with the Muslim majority.

Mosebach neither glorifies or denigrates any of this. Rather, he takes these people on their own terms. He brings to life a church most of us know little about, that has preserved the ancient faith from earliest Christianity, has survived and even revived under great pressure, and whose people have lived with martyrdom, not as a theoretical possibility, but a possible reality.

Through Mosebach, the martyrs also bear witness (what the word “martyr” means) to those of us in the West. They bear witness to love for Christ in the face of death. They bear witness to faithfulness as a religious minority when conversion would be easy and safe. We also see working men, some illiterate, trying to support their families, now pictured with martyrs crowns. One thinks about the last being first, the humble exalted. Many who will read this have far more education and other resources. I do, and I find myself wondering, both how I would respond, faced with what they were faced with, and whether many of us will be among the “least of these” honoring these men.

The Coptic Church has been a footnote in my church history. Through this book, I realized that I need to reconsider that outlook. Might they be one of those parts of the body of Christ worthy of greater honor? Might there be gifts they have been entrusted with, as well as an important history, that the rest of the church needs? Above all, if we are entering a post-Christian world, they may have much to teach us of how, then, we might live…and die.