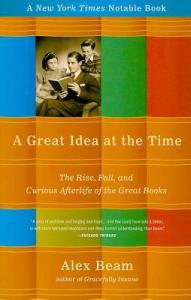 Summary: Beam narrates the story of the Great Books movement from its beginnings with John Erskine, Robert Hutchins and Mortimer Adler, to the publication of The Great Books by Britannica and rise of Great Books groups, the “core wars” and the remnants of this movement still hanging on today.

I have probably been intrigued and tempted by the Great Books idea all of my life. I remember looking with envy at the Britannica set acquired by a friend of mine and was probably saved from acquiring one myself only by my wife’s very sensible questions: “where are you going to put those?” and “are you going to read them?” Still, along the way, I’ve attempted to read at least some of these, usually in annotated editions (the Britannica set is not), guided by Mortimer Adler’s How to Read a Book and Clifton Fadiman’s Lifetime Reading Plan.

So it was with some interest that I picked up Alex Beam’s book which is neither hagiography nor hatchet job, but a highly readable, and a times humorous, look at the Great Books movement and particularly its two principle lights: Robert Maynard Hutchins and Mortimer Adler.

The book traces the beginnings to various “great books” lists, most notably Charles Eliot’s at Harvard, which eventuated in the Harvard Classics, Adler’s initial inspiration. Adler was mentored by John Erskine, who advocated for the great books at Columbia in the General Honors course, which eventually Adler taught as a graduate student in the 1920s. Erskine, Adler, and Clifton Fadiman also taught courses for working adults beginning the dual character of Great Books promotion in the academy and in “middlebrow” circles among working people seeking a broader perspective on life.

Then enters Hutchins who invites Adler to Yale in 1927, and then to the University of Chicago, when Hutchins became president in 1929. Together they sought to reform undergraduate education around a Great Books curriculum and later promoted Great Books groups among the public culminating in the Great Books Foundation to promote these groups. Within four years (by the late 1940s) they claimed there were 2,500 such groups meeting across the country.

William Benton’s involvement was a key moment in the Great Books movement. A consummate salesman and member of a Chicago Great Books group, he acquires Encyclopedia Britannica and proposes publishing a collection of “the Great Books”. Adler, Hutchins, and Erskine oblige and Beam narrates the sometimes hilarious process by which certain books were included or excluded by this committee of white males, selecting largely a collection of books by white males. He also gives a detailed account of Adler’s signature contribution to this project, The Syntopicon, an index of 102 ideas with references to where they arise in the Great Books. Beam describes the questionable marketing techniques used to lure middle-class families to acquire an impressive looking set of books most would barely read.

The rest of the book is an account of the gradually dwindling sales and disappointments of both Adler and Hutchins, the “core wars” which eliminated many of these works from college curricula at most universities, offset by the narratives of those whose lives were profoundly touched by the Great Books, and the collegiate holdouts, like St. John’s in Annapolis and Santa Fe, where the Great Books are the curriculum. He concludes with describing Great Books weekends where, although he is “of a certain age” he is the youngest person in the room.

One wonders in reading this if Adler and Hutchins had two principle faults: inflexibility and codifying the Great Books into a published set. Beam contrasts this movement with Oprah’s book club (which probably has Adler and Hutchins turning in their graves). I would add the attention book recommendations receive from Facebook founder Mark Zuckerberg and Microsoft founder Bill Gates. Neither are recommending fluff books and there is always a spike in books sales around their recommendations. While it is true there are many adults who only read a few books a year, and that mostly contemporary popular fiction, there are those who recognize that something was missing in their education, and are looking for help in enlarging their horizons.

What if, instead of pouring their efforts into dubious marketing of the Great Books sets, Adler and Hutchins had worked to develop annotated works, and good discussion guides, and maybe excluded some of the more challenging and obscure ancient mathematical and scientific works? What if they had shown a more enlightened approach that recognized great works like W. E. B DuBois’s The Souls of Black Folk and other works by those not in the “dead white male” tradition? Might they have forged a literacy movement that would have embraced all Americans and avoided the “core wars?” Maybe not, and it is clear that this just was not their vision. What Beam’s book makes clear is that it was this truncated vision, and not the American populace that was to blame for their disappointments. 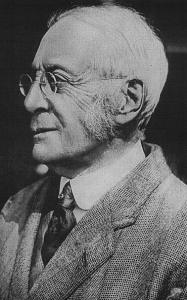 I recently came across a post announcing that I could “Read the World’s Best Books for Free with the Harvard Classics“. Actually, the article is quite useful in giving the background, contents, strengths and deficiencies of this selection of great works assembled by Harvard President Charles William Elliot in 1909. The reason we can now access this collection for free (in electronic form) is that it is now in the public domain, its copyright having expired. The article also gives links to sites where The Harvard Classics are available and tips for reading this collection on an assortment of e-readers.  All in all, quite helpful.

The Harvard Classics, published for many years by P.F. Collier occupies five feet on one’s shelves and Elliot maintained that by reading from this collection for 15 minutes a day, one could attain to the elements of a liberal education. I figured out that if you followed Dr. Elliot’s advice and read 10 pages a day from this 22,000 page collection, you could finish this project in just over six years. My brother bought a print set years ago. I have to ask him if he ever was able to get anywhere close to reading through it.

The article explored the underlying attraction of acquiring sets like this or the more extensive “Great Books of the Western World” assembled by University of Chicago president Robert Hutchins, and professor Mortimer Adler. For any of us who love to read, there is this daunting, and maybe depressing awareness, that we cannot hope to read even the tiniest fraction of the books published, and even books that might be considered of note. “So many books, so little time.” These might not be all the greatest books, but it is a great start and can certainly keep us occupied for some time. And as the article mentions, it saves me from the nagging question of what to read next.

I also wonder if there is an attraction, exacerbated by the internet, and all the sources of free great books, of succumbing to the temptation to hoard knowledge. It is an alluring temptation indeed to think that one might have access with the flip of a switch, a touch of a screen, to the libraries of the world and the knowledge of the ages.

I know in times past I’ve been tempted to acquire one of these sets by the thought that by reading these I could be wiser, more literate, more understanding of the existential realities of life. Then my wife, the practical one,says to me, “we have no place for another five foot shelf of books (or more with the Great Books), and besides, if you have that much time for reading, I’ve got work around the house for you!”

There is a personality typing system called the Enneagram that consists of nine types. Each type has certain strengths and an “underside”. Type five is the observer. They are curious, insightful, and sometimes at their best visionary and innovative.  Their underside is hoarding–of knowledge, of energy, and even of physical objects. I’ve wondered if many bibliophiles (myself included) fit into this type.

Hoarding is a way we make ourselves feel secure, and perhaps even godlike, when what is healthier is a life of giving and sharing and mutually interdependent relationships. Writing about the books I read is a way of giving away what I learned and sharing the goodness I’ve found. And in recent years, there has been a certain liberation in boxing up and giving away or selling hundreds of books.

One of the gifts of growing older is realizing our limitations and to treasure what we have rather than building illusionary “castles in the air”. Even a freely downloaded Harvard Classics is not a temptation for me. I know I won’t read all that is in it, and I will read a number of other things, many of which I will enjoy and profit from and share with others.

Colossians 2:2-3 speaks of all the treasures of wisdom and knowledge being hidden in Christ. As a Christ-follower, I don’t have to pursue these hubristic dreams of literacy and great knowledge. It is clear that there is one who has these qualities–and it isn’t me!

None of this is to discourage you from acquiring such a collection. I wonder about the reading of such books on e-readers. Yet I do believe in the value of great works of writing, both classic and contemporary. I just hope you won’t look to them to do what books alone cannot do in your life.