Summary: Rostnikov, on vacation in Yalta, learns that the death of a fellow investigator on vacation was murder, and that top investigators throughout Moscow are being sent on vacation at the time of a major political rally.

Porfiry Rostnikov is on vacation in Yalta. Rather, he was sent on vacation. He accepts it because it is a chance for recuperation of his wife, Sarah, from brain surgery. He meets another investigator, Georgi Vasilievich, has pleasant conversations with him in the evenings, until Vasilievich turns up dead from an apparent heart attack, only it turns out to be murder. The signs show that his killers inflicted painful interrogation first, and searched his room.

Meanwhile, his assistant Emil Karpo is investigating the murder of an East German, until he is also ordered on vacation. He stretches his departure to finish his investigation while the others on the team pursue a band of computer thieves preying on Jewish computer specialists, resulting in Sasha Tkach discovering he is all too human, failing his partner Zelach, who winds up in the hospital. He ends up joining Karpo.

What is it Vasilievich had discovered? What connection did this have with all the top investigators around Moscow being sent on vacation? Who was doing this and why, in a Moscow caught in a power struggle between Mikhail Gorbachev and Boris Yeltsin? And why does all this coincide with a major political rally?

You probably have a sense of where this is going. That’s what made this diverting rather than riveting. You want to see how Rostnikov and his team figure out what’s going on. There are predictable instances of things being not as they seem. Perhaps one of the reasons Kaminsky sends Rostnikov on vacation is it offers a chance to develop other characters on the team–Tkach, Karpo, and even Zelach.

This was not the most outstanding in the series. Kaminsky develops Rostnikov’s team, explores the labyrinthine maneuverings of the Kremlin with an engaging enough plot to hold your interest. Sometimes, that’s all a book needs to do. 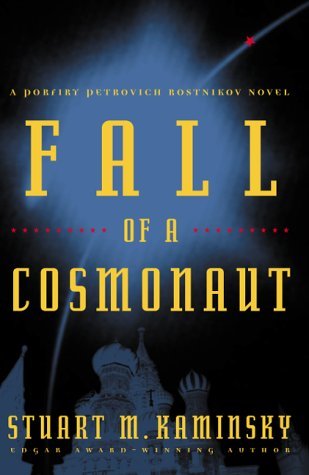 Summary: Chief Inspector Rostnikov and his team are charged with investigating three cases, a missing cosmonaut, a stolen film, and a brutal murder in a Paranormal Research Institute, only the first of the murders in the course of the story.

My son often manages to find books I probably never would have noticed that end up as fascinating reads. This book was such a case. It is actually the thirteenth installment in Stuart M. Kaminsky’s Inspector Porfiry Rostnikov series and the real find here is the character of Rostnikov who combines the savvy political instincts necessary to survive in a cutthroat Russian bureacracy with an intuition about human behavior that leads him to surround himself with shrewd associates, and solve crimes.

In this installment, there is not one, but three cases that his boss, the Yak, has assigned him, expecting results. One is a cosmonaut that has disappeared, along with secret knowledge of events on the Mir space station, knowledge that others have already died without revealing, the most recent by a swift injection from an umbrella-bearing man that is following Rostnikov and his son Iosef, as they travel to the village where Tsimion Vladovka grew up.

In the second case, a movie director, Yuri Kriskov has just completed what is adverted to be a great epic on the life of Leo Tolstoy. Then he receives word that the movie and its negatives have been stolen, and are being held for a ransom that if not paid will result both in the destruction of the movie and the death of Kriskov. It turns out that this is a plot of an assistant, Valery Grachev who is in love with Vera, Kriskov’s wife, and Vera, who wants to be rid of Yuri. Sasha Tkach and Elena Timofeyeva are assigned to this case, trying to find the manic genius who has stolen the film, and is seeking a way to kill Yuri.

The third case involves the gruesome death by claw hammer of a sleep and dream researcher at a Paranormal Studies Institute. Emil Karpo and his understudy Zelech are assigned this one. Zelech is sidetracked by a woman researcher who suspects him of special abilities. Karpo collects shoes, finds a suspect who is a reclusive researcher who claims he is framed, and homes in on a jealous fellow scientist good at covering tracks.

Rostnikov has the skill to adeptly counsel each both on the cases and their personal lives. Karpo needs a personal life. Tkach is estranged from his wife. Elena and his son Iosef are engaged. Zelech is single. They eventually unravel each case, but not before others die and their own lives in several instances are endangered. The cases also provide “information”  that “the Yak” can use to advance his own ambitions, and his ability to control and manipulate others.

I mention all the figures associated with the cases because, like any good Russian novel, keeping track of the names and who is doing what is more than half the battle! The narrative keeps moving back and forth between the cases briskly enough that we don’t lose the thread of any of them as we move to the climax and resolution of each.

Altogether, there are sixteen numbers in Kaminsky’s Rostnikov series. I don’t know if I’ll get around to reading all of them, but I did pick up another one as a result of reading this. I think one of the most intriguing thing about mysteries is the distinctive character of the detectives–Holmes, Poirot, J. B. Fletcher, Kay Scarpetta, Robicheaux, Maigret, and Rostnikov–each seems a world different from the others and the delight is as much in the depths of these characters as in the resolution of these cases. I think I’m going to have to modify the bibliophile’s complaint and say, “So many series and so little time!”