It is interesting the things you learn on the way to researching something else, in this case, posts on the Austin Log Cabin and Jared Potter Kirtland. I discovered that the Strock Stone House, after the Austin Log Cabin, is one of the oldest surviving buildings in Austintown and both homes are historical sites maintained by the Austintown Historical Society. Like the Kirtland residence in Poland, the Strock Stone House (also known as the Judge William Shaw Anderson house) was probably a stop on the underground railroad. Records of such things were not kept because it was illegal (but moral) to shelter and aid fugitive slaves.

The house was built in 1831 by William McClure and occupied by William Strock and his family. Strock’s parents came to Austintown between 1813 and 1815, living in the Smiths Corners area. The home, located along the original road between Youngstown and Akron (a bit south of Mahoning Avenue, was built of huge blocks of sandstone quarried from a nearby quarry on South Turner Road). The road was originally a dirt road, later a plank road, and finally a brick road. Part of the driveway beside the house consists of the original brick.

In 1851 the Strocks sold the house and 108 acres to Francis Henry. If the house served as a stop on the underground railroad, it would have been under Francis Henry’s ownership. The house was somewhat isolated and fugitive slaves could approach without being seen by prying eyes.

In 1863, Francis Henry sold the house to David Anderson, who had met Jonathan Wick in Philadelphia. The two of them opened a general store in Jackson Township and at one time, Anderson was the wealthiest resident of Austintown, worth nearly $50,000, a tidy sum in 1870. After his wife Hannah died from an accidental fall in 1879, Anderson let the house fall into disrepair, then turned it over to his oldest son, William Shaw Anderson.

William Shaw Anderson was a prominent attorney and judge in Youngstown and lived in the house between 1890 and 1925. Between 1912 and 1918 he made improvements on the existing structure and built a frame addition (the white shingled portion) that included a sun room, dining room, and dinette downstairs, and three bedrooms and a full bath upstairs. President William McKinley was reportedly one of his guests.

In 1925, Anderson died and the house passed to his children. In 1929, they sold the house and land to the Mahoning Valley Sanitary District (MVSD), which was in the process of creating Meander Reservoir, modernizing and improving Youngstown’s water supply. At that time, the road was moved north to the present location of Mahoning Avenue.

Until 1985, the house was occupied by the Chief Engineer for MVSD. Since then the Austintown Historical Society, with help from MVSD has maintained the house, particularly the interior. The house features antiques, furnishings, period clothing, games, equipment, and utensils. One of the distinctive items on display is a slave quilt from South Carolina.

The Austintown Historical Society hosts a Holiday High Tea each November with the house decorated for the holidays. The most recent was on Sunday, November 10, 2019, and attended by 120 people. They have also hosted Spring Teas.

Anyone can visit the Strock Stone House on the first Sunday of each month from 1 to 4 pm. No appointment is needed and no admission is charged. Donations, however are welcomed and there is a place to leave donations. The house is located at 7171 Mahoning Avenue, just east of Meander Reservoir. More information about the Austintown Historical Society and events at the Strock Stone House may be found at their Facebook page.

We drove out Mahoning Avenue by Meander many times before I-76 was built, but I never noticed the house (although at that time it was still occupied by the Chief Engineer. It is one more place I’ve added to my “bucket list” of places to visit around Youngstown.

[Written in 2019. Check their Facebook page for current hours of operation. ] 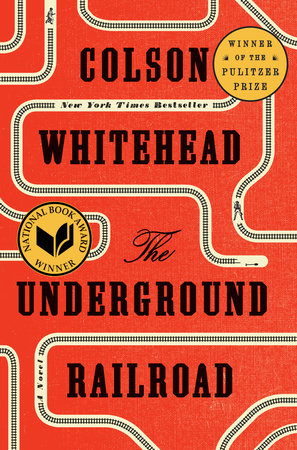 Summary: A fictional narrative of a Georgia slave, Cora, who with another slave escapes the plantation, and through a series of harrowing experiences, and the existence of an actual underground railroad with trains and engineers, escapes to the North.

The Underground Railroad has received critical acclaim, winning a National Book Award, a Pulitzer Prize, and being chosen for Oprah’s Book Club. This is a very good book, portraying the brutal realities of Antebellum slavery on cotton plantations, the brutalities of slave owners, overseers, patrollers and night riders, and slave hunters. The character of Ridgeway, the slave hunter, is among the great evil characters of fiction. The protagonist, Cora, is a resilient, even fiercely determined character who will murder more than on of her potential captors, even while both angered and motivated by her mother Mabel, who escaped while she was a little girl and never was caught.

Cora agrees to escape the Randall Plantation with Caesar when Terrence Randall, a tyrant, takes over for his deceased brother.  Caesar has learned from a sympathetic merchant of an underground railroad that will take slaves to freedom. At the last minute, another slave, Lovey, joins in, but is soon captured while Caesar and Cora, who fatally bludgeons a young man attempts to hold her, escape and contact the station master. What they find is an underground railroad that is no metaphor but a vast subterranean rail network with rails, trains, and engineers, built by those engaged in the fight against slavery.

Their flight takes them to South Carolina, where they hide under assumed names in an “enlightened” town educating them for citizen, but with underlying sinister motives. Ridgeway shows up and Cora escapes, but Caesar is taken. Cora arrives unexpected at a closed down station in a North Carolina town on a freedom crusade of lynchings and house searches. Reluctantly, Martin and Ethel Wells shelter her, running a terrible risk. In the end Ridgeway finds her and takes her into Tennessee, where she is rescued by Royal, a militant version of Harriet Tubman. One of Ridgeway’s men is killed, Ridgeway bound and left to die, and they escape to a utopian Freedom Farm in Indiana. But will they be safe even here?

The plot is interrupted by “flashbacks” that fill in content, but felt like an interruption. But the feature that worked the least for me was the railroad. This aspect of the book had a magical realism feel, and just didn’t work for me, but then I’ve never been a fan of this technique/genre. It seems that the main function of the railroad was to get Cora to the next scene of action, where the real interest and the strength of this narrative lay. We see the courage of station masters, to be sure, but the actual journey, the risks run by slaves, and in many cases, rescuers like Tubman seemed to be minimized, even though the title suggests a focus on the railroad. I also found the decisions to stay in South Carolina, and later Indiana, somewhat implausible when all slaves knew their only chance of safety, especially from figures like Ridgeway, was Canada. I might have liked some documentation of sources for the portrayals slave conditions and race hatred, and some comment on what was based on fact, along the lines of what Stowe did in Uncle Tom’s Cabin.

All in all, the  plotline, strong characters, and portrayal of slavery and race hatred make this a good and important work. I think it could be more powerful if it portrayed the efforts of the historical underground railroad. But the portrayal of slavery and racism in this book is important to our nation conversation. To meaningfully, say “never again” we must understand to what we are saying “never again.”