Edith Hamilton was not the only amazing newspaper woman that wrote for the Youngstown Vindicator. And like Esther Hamilton, Ella Kerber came from nearby New Castle, descended from German immigrants who arrived during the Civil War. She joined the staff of the Youngstown Vindicator in 1918. In 1922, she was acclaimed at the Ohio Newspaper Woman’s Association Convention in Columbus as the only woman court reporter in the state. She was known for her ability to scoop other reporters and was on a first name basis with politicians and other national figures across the country.

In 1926, she was honored by the Youngstown Police Department for raising the money to provide every policeman with a $5000 paid up life insurance, raised through amateur shows. I wonder if this is where Esther Hamilton came up with her idea for her Christmas fund-raisers. She lead efforts to establish the Youngstown Little Theater which eventually became the Youngstown Playhouse.

However, there was one event for which she was probably the most famous. She was the first newspaper woman to go to jail to protect the confidentiality of a source. In 1930, Irene Schroeder was on trial for the murder of a highway patrolman in New Castle. Kerber had provided “The Story of Irene Schroeder” to newspapers across the country, which was being published serially during the trial. She refused to testify as to the source of the story, and spent 52 hours in a New Castle jail cited with contempt of court. Because of some quirks in the law, she was unable to obtain bail. One newspaper account said, “She appeared to be unconcerned as she was escorted to a cell in the county jail.”

Also like Esther Hamilton, she had a long career, stretching from 1918 into the 1970’s. Along the way, she was a city council candidate for Youngstown’s Fifth Ward and active in Republican party affairs. In later years for papers in Warren, Boardman, and Austintown as well as doing stints in radio in Charleston and Huntington, West Virginia.

I wonder what it was like around the newsroom of the Vindicator when both Esther and Ella were there. I don’t how long Kerber was around after the Telegram merged with the Vindicator in 1936 and Hamilton joined the paper. My hunch is that the paper wasn’t big enough for both of them, though I do not know the reason Ella Kerber moved on. What I do know is that she was a pathbreaker, showing that women could do all men could do as reporters, covering courts, scooping stories, and even going to jail to protect sources. She’s one I’d love to know a lot more about.

To read other posts in the Growing Up in Working Class Youngstown series, just click “On Youngstown.” Enjoy!

Do your remember going on field trips to the Youngstown Playhouse as a kid? I do. I can’t remember the plays we watched but I remember the Cat Lady who came out to welcome us and talked to us before the plays.

The Youngstown Playhouse has a long history in Youngstown. In the 1920’s, Youngstown was a stopover place for national stars like the Barrymores, Al Jolson, and Walter Hampden. Area residents wanted a more ongoing opportunity for live theatre based in and open for community participation. The Youngstown Playhouse website says “In the early 1920’s, four ladies from Rodef Sholom began reading plays for their own enjoyment.”  In 1927, several drama organizations came together and formed the Youngstown Players.

Originally, they performed in a converted barn at Arlington Street and Lincoln Avenue. People from every walk of life participated. The key ingredient was hard work, which people in Youngstown knew how to do. Talent followed.

In 1942, the Playhouse moved to an abandoned theatre on Market Street. Then, in 1959 they moved to their new (and current) home on 600 Playhouse Lane off Glenwood Avenue.

Over the years, the Playhouse has been the starting point for a number of artists. Two of the better known are actress Elizabeth Hartman, who starred with Sidney Poitier in A Patch of Blue, and John DeMain, a Grammy award winning symphony conductor, who I wrote about recently in a post on the Youngstown Symphony, where he served as acting director during the 1980’s. He currently is the music director for the Madison (Wisconsin) Symphony Orchestra.

The Playhouse is still going strong, offering a season of nine productions in 2019-2020. They offer a Summer Theatre Intensive for aspiring actors under 18 as well, other children’s educational programming, as well as opportunities for community involvement as volunteers, as actors in productions and patrons. The Playhouse receives no taxpayer funding and relies exclusively on revenues from grants, donations, and ticket sales–no small feat. James McClellan is the current operations manager and Johnny Peccano the technical coordinator.

How many of you remember going to Children’s Concerts on school field trips? How many of you remember going on similar trips to the local art museum? That may seem out of character for one’s picture of growing up in a working class, steel-making town. But that was part of my experience of growing up in working class Youngstown. I’m not sure I necessarily appreciated this that much at the time, other than the chance to get out of the classroom. But now I realize that we were being exposed to some of the cultural treasures of my city and being reminded that there was more to life than hard work in a factory (something I think those who want to eliminate the arts from education today need to think about!). I think there was a perspective, perhaps spiritual in nature among those in the working class, that realized that life was about the good, the true, and the beautiful. We loved good food and other good things of life, were often devout in our religion, and treasured both natural and man-made works of beauty. While both of our fathers were never able to pursue artistic interests, we have free hand drawings each of them rendered that show considerable talent and an eye for the beautiful. 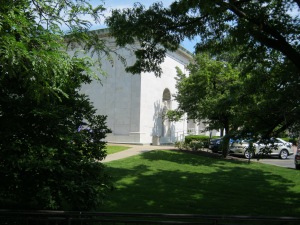 What I only realized after moving away from Youngstown is just how culturally rich the city was and is when it comes to the arts. I think first of the Butler Institute of American Art. Located next to Youngstown State, it was a wonderful place to take a break from studies and wander through the galleries, looking at the Remington paintings of Native Americans. Perhaps my favorite painting was Robert Vonnoh’s In Flanders Fields. We were in the Viet Nam era and the painting served as a visible reminder of the tragic and futile loss of young men’s lives in war.  In later years as we visited other art museums including the one in our own city, we came to realize what an incredible treasure Youngstown has, confirmed particularly among artist friends of ours. But the tour of the arts in Youngstown just begins here. There is the John J. McDonough Museum of Art, a contemporary art museum across the street from the Butler and part of the Youngstown State campus. John McDonough was a physician (my mother’s in fact) who built a notable collection of contemporary art and contributed to the construction of the museum through the sale of Gloucester Harbor by Childe Hassam, contributing the proceeds to help finance the museum.

In Flanders Fields by Robert Vonnoh

I remember going to Children’s Concerts of the Youngstown Symphony at Stambaugh Auditorium.  Later, the Symphony moved into Powers Auditorium, the old renovated Warner Theater, which is now part of the DeYor Performing Arts Center. As college students, I remember going on dates on cheap student tickets to see The Nutcracker and other performances, which nurtured my love for symphonic music. We also went to plays at the Youngstown Playhouse, considered one of the older community theaters in the country, tracing its history back to 1927.

In the years since we’ve left, the arts have continued to develop in Youngstown. The Oakland Center for the Arts, located in downtown Youngstown, fosters the development of new works from the various communities of Youngstown around current issues of justice, supporting emerging voices. The Artists of the Mahoning Commons now utilize the old Ward Baking Company building for studio space as well as arts events. I suspect there is far more going on than I know. Also, there are more arts organizations than I’ve been able to talk about in this post, a listing for which may be found at the Power of the Arts website.

While neither my wife nor I make our living in the arts, we both deeply value artistic expression. My wife is an acrylic and water color painter (who first exhibited her work at the Canfield Fair Art Show!). I sing with an accomplished community choir, Capriccio Columbus as well as write. While it took many years for us to pursue artistic interests even this far, we are both convinced that they were formed during our growing up years in Youngstown.

What are your memories of the arts growing up? What artistic institutions in Youngstown (or your home town) do you treasure?