I’ve been seeing lots of posts decrying Amazon’s recent conflict with the Hachette Publishing Group. I don’t intend to add to that outcry with this post, other than to say, if we think Amazon is a monster, then it is one we have helped create and it is just doing what it thinks are in its best business interests. There is a brutal, bottom-line logic to how these companies (Hachette as well as Amazon) operate. I suspect in the end they will come to some kind of compromise — neither wants to kill the goose laying the golden eggs. My son did a post on his blog that argues this point in far more detail, so I don’t need to.

What I would rather talk about are the great brick and mortar Indie bookstores, whether selling used and collectors book, or new. I was reminded these treasures during a visit this week to the Acorn Bookshop in Grandview Heights, a couple miles west of Ohio State’s campus. Acorn sells used and antiquarian books. George Cowmeadow Bauman is the co-owner and known widely as “bookstore George”. His love of collecting books and selling them came from his aunt, to whom the store is dedicated. He tells the story wonderfully!

This was my second visit to the store (I mentioned it in a post early in this blog’s history). I was in the neighborhood and decided to use a gift card a kind friend sent because she liked some of the posts on this blog! Who was I to complain? I hadn’t explored the basement before and in the process came across Norman. George calls what he does “Normanizing”. Before books are shelved, Norman repairs, cleans, and for books with dust jackets, puts a protective sleeve like those you see on library books over the dust jacket. I think for this reason, the store doesn’t have the musty, dusty feel I encounter in most bookstores of its type.  I’ve not been to a bookstore before that did this and I thought it was quite a nice touch! 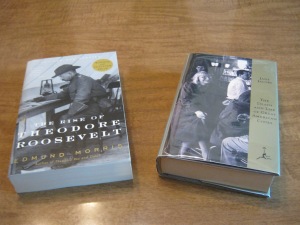 My purchase. Notice the protective sleeve on the Modern Library edition

One of the things that marks this store is the friendly relations between all the booksellers and the customers, those who are selling books and those who buy. I was looking for a hardcover copy of the first installment of Rex Morris’s biography of Teddy Roosevelt but could not find this. They had a paperbound copy which I ended up buying but they searched downstairs to see if they had it. On their website, they speak of this store as having an atmosphere kind of like the old comedy, Cheers, where everybody knows your name.

There is an experience in wandering around a bookstore like this, not only of discovering things you’ve not heard of before that are interesting, or finding that book you’ve been looking for. There is also the experience of being among a community of book lovers, of people you don’t have to explain your quirkiness to, because they get it. While I’ve not decided to boycott Amazon, I want to patronize places like this as often as I can because these people genuinely care about the love of books (as well as making a living at it), and fostering a culture where books and ideas and conversation about them are valued. It seems to me that places like this are part of what make a good city and a good society.

I’d love to hear your stories of the physical bookstores you love and value.

3 thoughts on “In Praise of the Indie Bookstore”