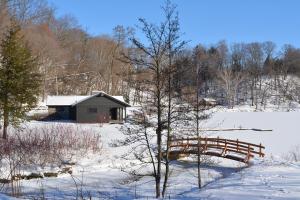 Gliding on a slippery smooth surface of ice. Temperatures so cold they almost take your breath away. A star-studded sky. A shoveled path across frozen Lake Glacier. Coming back to the wood fire and a cup of steaming hot chocolate. These are memories of ice-skating growing up.

My first memories of ice-skating were far less picturesque. My first ice-skating outing was on the frozen tennis courts at Borts Field. I’d just received a pair of skates for Christmas and this was the first time the weather was cold enough to try them out. You remember it…the robotic walk trying to stay vertical…three steps…and land on your butt…get up clinging to the fence…repeat. In my weird compulsiveness, I kept track of how many times I fell–thirty-two. It was hard to sit in those wooden school seats the next day!

I’m nothing if not tenacious! So I returned the next night and fell half as much and occasionally sort of glided on the ice. Gradually I could skate more sure-footed and faster. Curves became fun. I figured out, watching some friends, how to skate backward. Truthfully, that’s about as far as I got–jumps, spins, and other fancy stuff I never mastered. But it was enough.

Enough that is to skate with some of the cute girls I met who also liked to ice skate. I really only had one skating romance. I saw a girl with this spotted fur skating outfit and I was drawn like a mosquito to a light! And believe it or not, she let me skate with her! We ended up dating about six months until we both realized we really wanted to date other people. But it was magical to meet up on a Friday night and glide along the ice arm in arm. Even falling together wasn’t so bad!

Skating at Lake Glacier depended on it being really cold for really long so that didn’t happen very often. Eventually, we went skating at the rink (now closed) at the Wick Recreation Area. There was this cool thing I’d never seen before called a Zamboni! Every so often, all of us would get off the ice and this machine would re-surface the ice smooth as glass and twice as slippery! Up until then wherever you would skate would tend to get rougher and rougher–not bad if you were playing games on the ice, but terrible if you just wanted to enjoy the sheer wonder of gliding along.

These days, it is rare to skate on a lake where we are. If people skate, it is in an expensive indoor rink, or occasionally an outdoor one (our zoo has had one). Most of us growing up in working class neighborhoods probably could not have afforded most of the options available today. Now I can afford them but I would probably be risking limb if not life to venture out. But I have memories of wonder and magic of those growing up years skating on a cold winter night on a lake or a public rink, sometimes with a pretty girl at my side that bring joy in the remembering.

4 thoughts on “Growing Up in Working Class Youngstown — Ice Skating”