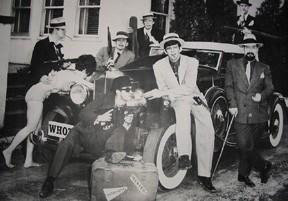 You know you grew up in Youngstown in the 60’s or the 70’s if you recognize that classic greeting by disc jockey Boots Bell on WHOT, the home of rock and roll in Youngstown during those years. Boots Bell not only was popular on the radio and at local dances but was also a communications professor at Youngstown State during the years we were in college.

Boots Bell was part of a team of disc jockeys collectively known as “the Good Guys” and included at various points Johnny Kay, Jerry Starr, Allen Scott, Johnny Ryan, “Big Al” Knight (the “all night” disc jockey), Dick Thompson and Smoochie Causey among others during this period.

Early mornings I would get up to Johnny Kay reading school lunch menus and shave and wash up to the upbeat tunes coming over my transistor radio. My wife remembers her mother turning him on just in time to play the Monkees “Day Dream Believer” at full volume with the line, “cheer up sleepy Jeannie” (her middle name is Jean and this was mom’s way to try to get her out of bed!).

Many of us would go to bed at night listening to “Nights in White Satin” with those haunting closing lines “breathe deep the gathering gloom”. In between, during the day, we would listen for the “cash call” amounts and try to be the right caller to win the jackpot. We would listen for the top 40 tunes each week and the top 100 countdown at the end of each year that seemed to take a good part of the day.

The Good Guys were fixtures in the Youngstown community, taking there turns appearing at dances all over the area. I remember watching them play basketball against the teachers at Chaney High School. One of the most remembered community involvements of this group was at WHOT Days at Idora park, where there was a special admission to the park for the day and they broadcast live.

Youngstown was a rock and roll town with a garage band in every neighborhood. WHOT captured and magnified our love for this music during what many of us think was the greatest era of rock and roll–from Buddy Holly and the Drifters in the 50s through the Beatles and the British invasion to the psychedelic music of the Doors and Cream in the late 60s. I listened to all of these late at night with a headphone plugged into my transistor radio so that my folks would think I was sleeping (and indeed they learned to check because I usually fell asleep with the radio on and the earphone still playing).

Most of us grew up listening to WHOT on the AM dial at 1330. Later they had an FM station at 101.1 (still known as Hot 101 in Youngstown). Eventually the AM station moved to 1390, which later became WNIO.  But back in the day, all of us had our transistor radios or car radios tuned to 1330, which was the voice of rock and roll in Youngstown.

What were your memories of WHOT?

31 thoughts on “Growing Up in Working Class Youngstown — WHOT”