We are taking some time off this week and love exploring some of the smaller towns around Columbus. On Tuesday, we were in Lancaster, Ohio and discovered a wonderful used paperback store right on the corner of N. Columbus and W. Main in the heart of downtown Lancaster. The Paperback Exchange has been in downtown Lancaster for about a dozen years but just moved to their current location in March. They were previously in a couple other downtown locations, one of which they vacated after a fire in the building and the building was torn down. 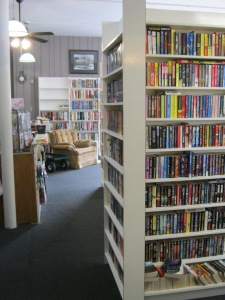 We found the store well and neatly laid out with large sections for current fiction, adventure and mystery stories, romance novels, science fiction, and a section of children’s books in the front of the store. The store has smaller sections of more “serious” religious literature, history and classical literature. They also feature a selection of cards, candles, and other gifts and sundries. True to its name, you can also receive store credit for many books and some other media. Consult with the store for its current policy on book and media credit. 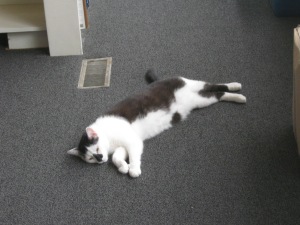 The sign outside the Paperback Exchange is reminiscent of the old Long’s Bookstore sign that now adorns the outside of the Barnes and Noble Store at Ohio State The Paperback Exchange sign came from a store in North Carolina. When you walk into the store, you will be greeted by one of two very friendly bookstore cats, either Dickens or Webster, or perhaps both. We only met Dickens on our visit.

What impressed me about the owner, Leanne McClellan, is that she has not only created a welcoming space with a great selection of the books most people are reading that sell for very reasonable prices. She also is a proponent of downtown Lancaster and was one of the pioneers in the revitalization of the downtown. Lancaster now has several new eateries including Table 1, Ale House 1890, Signatures Restaurant and Sports Bar, as well as a Glass Blowing Museum, Art and Clay, which is a walk-in ceramics studio, and Blank Slate Artisans where you can buy handcrafted items from local artists and more. Destination Downtown Lancaster is a great resource for planning a visit but once you are there, Leanne can give you an up to the minute account of the good things going on in downtown Lancaster!