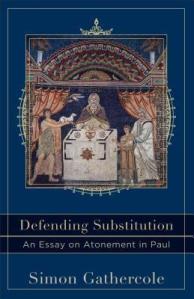 Summary: Gathercole defends the oft-maligned doctrine of substitutionary atonement, responding to the criticisms and challenges raised and demonstrating from key biblical texts that it can be argued from scripture that “Christ died in our place.”

The idea of “substitution”, that Christ died in our place, for our sins has come in for criticism from many quarters. Some claim this amounts to “divine child abuse.” Others argue that substitution has not necessarily been the church’s understanding of how Christ’s death on the cross atoned for human sinfulness. In this brief “essay”, Simon Gathercole engages this criticism and gives a modest but important argument for the biblical foundations of the idea of substitution.

First of all he contends that substitution is important both for our theological grasp of the gospel, the message of Christ and also pastorally vital in providing Christians assurance of their pardon before and acceptance by God. He defines substitution as “Christ’s death in our place, instead of us.” and sets this apart from other views such as representation and satisfaction. He also defends this idea against various criticisms, particularly that this is immoral by arguing that this was fully an act of Jesus own will, out of love for us, and not forced upon him.

Then he engages three exegetical challenges to substitution. The first is that of Harmut Gese proposing the atonement occurring through “representative place taking.” The second is Morna Hooker’s idea of “interchange” in which Christ becomes what we are so that we become what he is. The third is J. Louis Martyn’s idea of apocalyptic deliverance from Sin. In addressing this latter, he also provides textual evidence that Christ died not only for Sin but for the sins of people. In engaging each of these theories he shows what is of value in our understanding of the work of Christ, what is problematic or actually suggestive of substitution, and at the same time approaches these in such a way that substitution need not exclude other insights into the nature of Christ’s death.

The latter part of the book is concerned with careful exegesis of two key texts, I Corinthians 15:3, and Romans 5:6-8. In the first, he argues for the substitutionary understanding of the idea that Christ died for us, and makes a compelling case that the scriptures according to which this is so include Isaiah 53, where the idea of the servant’s death for Israel is, on the basis of his word study, very clear. In his study of Romans 5:6-8, he takes a very different approach in arguing that the idea of one who would scarcely die for a good man has parallels in the literature of Paul’s day. He appeals to the tale of Alcestis, and also to Philonides, Epictetus, and Seneca for proposing similar “substitutionary” ideas.

In between these two chapters, he includes an excursus on the question of why, if Christ’s death is indeed substitutionary, do Christians still die. His argument considers various senses of “death” and argues that while we die, we do not perish.

In concluding, he argues for the continuing importance of substitution and that this idea, along with representation, and liberation might be understood as part of Paul’s thought. Perhaps the most winsome aspect of the “defense” he makes is that it is an argument for the “inclusion” of substitution rather than for the “exclusion” of other ideas.

This is a short book, only 128 pages with bibliography and indices. The reason for this is that it is more or less a transcript of Gathercole’s Hayward Lectures at Arcadia University. This concise and readable account, while not covering with the depth some might want all the texts and theories of the atonement, serves as a theological resource for adult education in a variety of contexts, both lay and seminary, around this important Christian doctrine. Above all, it graciously argues why substitution matters, how it may be defended, and pastorally, how important these truths are to proper Christian confidence.