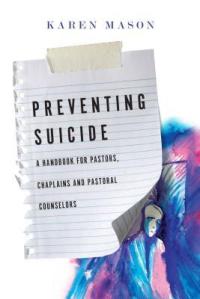 Summary: This handbook is written for pastors and other religious counselors, who the author contends can play an important role in preventing suicide. It focuses on how both theology and psychology can contribute to helping those at risk to harm themselves.

Pastors, chaplains, and religious workers are often in a position to recognize those at risk of attempting suicide. Yet often these individuals lack the training to know how to respond, and often are not integrated (sometimes because of privacy practices) into helping those considering taking their lives. Karen Mason contends that both the theological and community resources of a religious community afford important resources in caring for the suicidal. This handbook is written to help remedy that gap.

She begins by considering possible attitudes toward suicide and how these might affect our response, as well as the ways both the church and the psychological profession can work in partnership. Then she turns to some factual material. In chapter one, she focuses on incidence rates, indicating that 45-54 year olds have the highest rate of suicide deaths and that men commit suicide four times as often as women even though more women than men attempt suicide. She also considers other factors that confer risk as well as protective factors, which include family support and church attendance. She turns to shattering common myths about suicide including that real Christians don’t experience suicidal thoughts, prayer is all that Christians need, people are suicidal just to get attention, people who kill themselves are just being selfish, angry or vengeful, the depressed should just “buck up”, talking about suicide may give the person the idea to complete suicide, and most important that if someone wants to kill themselves, there is nothing we can do.

She considers theology, and theories of suicide. She explores various understanding of suicide and sin. Is it or not and is it forgivable or not? How should such beliefs shape pastoral care? She reviews the leading historical and current psychological theories of suicide.

Chapter 5 covers the material often given in “gatekeeper” training. It provides specific guidance for spotting warning signs, assessing for suicidal thinking (yes, it is appropriate and even helpful to ask someone if they have thoughts of suicide), assessing where a person is on a suicide continuum, assigning risk level, taking action appropriate to the risk level and how to provide pastoral care as part of a care team. The next chapter turns to helping those who survive suicide attempts. This is followed by talking about care for care-givers, including self care.

The last two chapters focus on dealing with what the rest of the book has sought to prevent–the aftermath of a death by suicide, dealing with caring for survivors and for the wider community. This last deals with a reality not often considered–contagion and suicide clusters. The conclusion then sums up the ways religious workers can play an important role in suicide prevention.

Each chapter concludes with a list of print and online resources related to the topic and questions helping pastoral caregivers to reflect on their attitudes and approaches to suicide.

This is an important resource that breaks the conspiracy of silence and shame with compassionate and clear steps pastoral caregivers can take to prevent suicide. Sample dialogues even give language for caregivers as they engage with those considering suicide. Furthermore, it shows how religious communities can play an important role in preventing suicide and helping people find hope.

I’ve been part of memorial services for students who have died during their collegiate years, including some who died by taking their own lives. I can tell you that one such death is too many. And if this book helps save even one such life (and I hope it will save more) it will be worth it.

One thought on “Review: Preventing Suicide”