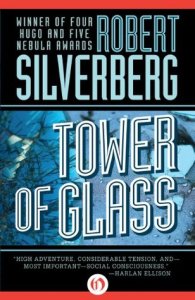 Summary: Mega-wealthy Simeon Krug, creator of the process that produces androids, learns of signals from a distant star and uses his androids to build a tower of glass to communicate. Obsessed with distant life, he is woefully ignorant of the hopes and faith the life he has created place in him.

Robert Silverberg began publishing science fiction around the time I stopped reading it. I may have read a few of his short stories in anthologies, but that was a long time ago. Over time he was awarded five Hugo and five Nebula awards (yes, I know the cover image says four Hugos!). He is one of twenty-nine science fiction writers to receive the Grand Master Award of the Science Fiction and Fantasy Writers of America. Recently, Open Road Media has re-released a number of his books in e-book format, where I am discovering him for the first time.

Tower of Glass is set in the twenty-third century. It is premised on a relatively depopulated earth from previous wars. Simeon Krug has helped fill this population vacuum and become fabulously wealthy by perfecting the process to create android humans out of vats filled with the basic components of life. Three classes of androids exist in ascending intelligence from gammas to betas to alphas and Krug sells them to serve the remaining human population.

The novel begins with Krug setting out to build a 1500 meter glass tower in the Arctic permafrost to send tachyon signals to NGC 7293. Krug, whose previous efforts to discover life forms in nearby systems have all failed, has learned of cryptic signals in the form of number sequences coming from this ring nebula. He employs a vast work force of his androids under the leadership of his Alpha foreman, Thor Watchman, in an ever more frantic quest to complete the tower, oblivious to the increasing death toll this dangerous task entails. Simultaneously, in a Denver factory he is building a space ship to send more androids in suspended animation to NGC 7293.

While focused on the stars, he is more or less oblivious of intertwined undercurrents with his son, Manuel, and the androids. Like other sons of the fabulously wealthy Manuel is trying to find his own meaning in life beyond inheriting his father’s enterprises. He is in an affair with an android woman, Lilith, while married to Clissa, who has yet to bear him a child. His quest leads him to “shunting” where he exchanges consciousness with five other friends, discovering their most intimate thoughts, emotions, and memories, as they do his.

Meanwhile, unbeknownst to any, including Simeon Krug, most of the androids, apart from a few political activists, have given themselves over to the religion of Krug. They have created a whole religious system centered around their “creator”, in whom they lodge their hopes that after trials, they, the people of the Vat, will be full partners with the people of the Womb, enabled by their Creator Krug, who they venerate and pray to in secret services in “chapels” all over the world.

Redemption is slow in coming. When Manuel tours one of the factories that gives birth to androids and is deeply disturbed by what he sees, his lover, Lilith, and Thor Watchman see a chance to help their prayers for deliverance from servitude to their human masters. Manuel is cultivated as an android ally, finally learning the truth of their religious belief in his father.

As the tower nears completion, Manuel goes to his father to reveal the hidden religion and intercede for the androids. We approach this plot climax wondering whether any of this was such a good idea and how Simeon Krug will react to his god-hood.

Beyond the android religious rituals, I was struck with a couple other profound echoes of biblical religion. One was the idea of Krug’s tower. Like the tower builders in Babel, Krug builds a tower to reach up to the heavens–literally. We watch a hubristic quest, an obsession really where pursuing a technological chimera that justifies mounting death tolls and sending a ship full of androids toward the blue giant at the center of the nebula in a quest to communicate with life that could incinerate them.

We also cannot help but consider the implications of crossing the threshold of become “creators” of life, and what that does to both “creator” and “created”. Our technologies are resulting in increasingly life-like and humanoid robots, and our cloning experiments have resulted in viable animal forms of life. This book explores the presumption of control by the creators. It also explores the consequences of what happens when such creations have “self-awareness” and with that longings both for worship and for self-realization. If anything, Silverberg’s story speaks with greater prescience and relevance today than when first published 46 years ago, warning us of the dangers of our hubristic dreams.

[Parent advisory: This book does contain explicit descriptions of sexual intercourse as well as some violence.]

One thought on “Review: Tower of Glass”