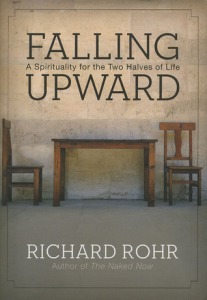 Summary: Richard Rohr focuses on what he sees are the key developmental tasks for each “half” of life, using the image of the container for the first half, and contents for the second.

I’ll be honest. This is not a book I can wholeheartedly recommend. While I found a number of useful insights, I thought the “spirituality” on which Rohr grounded these more reflective of a “blend” of Eastern and Western spirituality rather than the Catholic Christianity with which Father Rohr is most closely identified. For some, that may not be a problem, or even is a plus! If you are looking for a spirituality that roots an understanding of development in classic Christianity, whether Catholic, Orthodox, or Protestant/Evangelical, that is not this book.

First for the insights I most appreciated, which I think come out of long pastoral work with people seeking to grow in their faith throughout life. There are two key insights that are important:

First, there is the insight that life can be divided into two halves with the key task of the first being fashioning the “container” of one’s life and that the second half is devoted to the “contents” of that container. The first half is the structures of rules, disciplines, community. This occurs in a healthy way when these things are present in an atmosphere of unconditional love. Where love is lacking or the structures are lacking, the container is inadequate for the second half task. The second half, then focuses on the contents of life, the becoming of a unique person who knows how to draw from all these structures and yet go beyond them.

Second, there is the title idea of “falling upward”. At some point, there is a necessary “fall”–failure, suffering, tragedy. In some sense the first half “container” may have prepared you to face these, and yet is inadequate of itself to do so. It is time, in Rohr’s words to “discharge your loyal soldier.” It is often in the facing of our fallenness and finiteness and imperfection that we become fully human as we stop trying to be what we are not, and begin to pursue a life of grace, of calling, of wholeness, discovering our True Self. Those who resist “falling upwards” go on in life to become cynical, emptily driven, emotionally detached and judgmental individuals. This is the story of the elder son in the story of the Prodigal.

There are several key places where I believe Rohr is articulating a spirituality grounded more in a “new age” spirituality than in Christian orthodoxy, despite his warm avowals of how for him Christ is the center. For one thing, he articulates a new age account of the fall of Adam and Eve as a “necessary fall” for their development of consciousness. I would agree with the formative nature of failure, transgression, and suffering that comes to the foot of the cross and finds grace. That is different from a theology that says the fall was necessary for the evolution of our consciousness. One involves restoration of what was lost through the cross. The other seems to involve evolutionary progress where a cross is superfluous.

A second place is Rohr’s proposal that “heaven” and “hell” have to do with our consciousness, rather than ultimate destinies. Certainly, our consciousness can be “heavenly” or “hellish.” Views like this have become popular of late, perhaps as alternatives to ugly forms of “hell fire preachers”. Yet I wonder if the grace Rohr speaks of can be meaningful without there being a real judgment.

Finally, Rohr seems to propose that our development is really through a transformation of consciousness through the “falling upward” experience, perhaps aided by the Spirit of God, rather true spiritual rebirth. There is language of “union with ourselves and everything else” that seems more the language of pantheistic monism than of being “at-one” with God in Christ. In fact, it seems at times that Rohr is among those who say that all religions are really saying the same thing and that those who say otherwise are guilty of “either-or” thinking. I would contend that the difference between a “both-and” view that wipes out distinctives and the Christian faith is that the Christian faith is a faith of reconciliation–a third way between “either” and “or” that doesn’t wipe out distinctions but reconciles them in Christ.

This is regrettable in my view because his insights into the two halves of life and the transition of what I might call “fall into re-formation” may be grounded far more robustly is what C. S. Lewis would call “mere Christianity.” There are so many things that, for one living in the second half, connected deeply for me. His description of “the second simplicity” and the “bright sadness” ring true. I think part of what so many like in Rohr, and I’ve appreciated in his other writings is his ability to capture the imagination and heart in his word paintings. However, as one who cares about the second half journey and believes it is best grounded in “mere Christianity” I would recommend Hagberg and Guelich’s The Critical Journey as one of the best books I’ve come across on the issues of our life journeys.