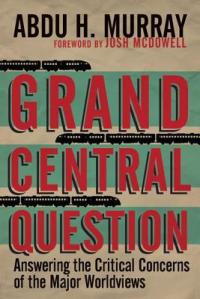 Abdu Murray grew up as a Muslim, trained as a lawyer, and spent years questioning the beliefs of those around him–atheist, Christian, pantheist–until he was confronted with some questions of his own that led to a his embracing the Christian faith.

In this book, Murray begins with the important and costly search for truth, acknowledging that this could lead to great loss–of respect, of family, even of life–and leaves us with the question of what the truth is worth for us. He then explores the idea that every worldview in some way addresses some basic questions including:

In three sections, Murray expands upon the central question for each worldview, showing how the worldview attempts to address this, the shortcomings of those explanations and why he believes the Christian gospel provides the most cogent and satisfying explanation. For the secular humanist, simply asserting the intuition of our worth may not be enough if we come up against superior beings considering us expendable. Appealing to fine-tuning arguments of design, Murray proposes the grounding of our worth in God as his image bearers.

Likewise, pantheism argues for the elimination of desire as the basis for the escape from suffering. Yet this does not do away with the reality of suffering. Christian faith speaks of a God who enters into our suffering, and rather than trying to deny or transcend its existence offers meaning in suffering as well as an ultimate deliverance from it.

Finally, and perhaps especially valuable because of the author’s own prior beliefs, is his exploration of Islam. He particularly explores the idea of “God is greater” and proposes that the very things Islam denies are in fact what offer the greatest possible God, a God who is One not only as we are but uniquely one essential deity in three persons, a God whose love arises from the eternal relations of the three, and a God who may be approached in worship because he approached us in his Son. Furthermore, this Jesus did not have a substitute die on the cross, hardly a sign of greatness, but died as the substitute for humanity.

He concludes with the proposal that the Christian gospel does not address one Grand Central Question but provides answers that address the range of questions about human existence that intellectually satisfy and can spiritually transform.

I appreciated the idea of a “grand central question”, although I wonder if proponents of these worldviews would be comfortable with this rubric. His discussion showed evidence of many dialogues with people who hold the views he is addressing, but I wonder if the book would have felt more authentic if he had dialogue partners from these three “worldviews” responding to his proposals.

I think what set this book apart was the sensitive and insightful exploration of Islam, including his narrative of how careful study of the Qur’an actually led to his examination of the gospels. I hope he will write further on Muslim-Christian engagement, which seems so important and needed in our day.