Summary: Explores two qualities that we often think opposed to one another and argues that strength and weakness are paradoxically related and that human beings flourish to the extent that they can appropriately exercise strength (authority) and weakness (vulnerability) together.

We often tend to think of strength and weakness, authority and vulnerability as mutually exclusive qualities or at opposite ends of a continuum. Yet the apostle Paul writes in 2 Corinthians 12:9-10:

But he said to me, “My grace is sufficient for you, for my power is made perfect in weakness.” Therefore I will boast all the more gladly about my weaknesses, so that Christ’s power may rest on me.  That is why, for Christ’s sake, I delight in weaknesses, in insults, in hardships, in persecutions, in difficulties. For when I am weak, then I am strong.

Andy Crouch, building on this idea argues that strength and weakness are paradoxically related and that excellence in leadership and human flourishing occur when both are present in one’s life together. Rather than being at opposite ends of a continuum, he sees them as the x and y axes of a 2 by 2 grid: 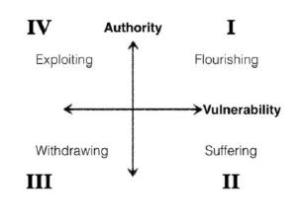 Excerpted from press kit for this book

In successive chapters, Crouch explores life in each quadrant. Those in the quadrant of suffering have exposure to meaningful risk without the capacity for meaningful action. Illness and poverty are places where this is experienced, yet even here, when the gospel is embraced, hope and dignity is restored and there is a kind of strength in weakness allowing persons to move to quadrant I. Conversely, those in quadrant IV exercise authority without vulnerability, where the protection of oneself and one’s position means the exploiting of others.

Quadrant III is the quadrant of withdrawal. It is the safety of one’s parents’ basement–no meaningful action in a world of video games, and no risk in the provision of food and shelter, sequestered away from the world. Crouch invites those who have withdrawn to take two steps–into the natural world of creation, and into the relational world of doing real things with real people!

Perhaps the most interesting chapter was one where he explored the challenge many leaders face of living with overt authority and hidden vulnerability. There is the President of the United States, who has such significant authority, that he receives a unique briefing of the dangers facing the U.S., a briefing he can discuss with few or any of those he meets in the remainder of the day. Similarly, many business leaders cannot speak of the vulnerabilities of their companies, but must take meaningful action to address them for their communities to flourish.

His concluding chapters talk about choosing of vulnerability, to literally be willing to put one’s life on the line in the pursuit of meaningful action with exposure to meaningful risk. This is transformative leadership, where one both experiences being truly alive, and where others are helped to flourish as they see our strength in weakness.

This is a much shorter work than either Culture Making or Playing God. It builds on the latter, which explores the use of the gift of power redemptively, but the length is appropriate to elaborating this single critical paradox of strength and weakness. One question the book raised for me is what is the hope for those in quadrant IV, the exploiters? Crouch warns of the judgment and the fall of those who choose this path. And perhaps those who are strong without being vulnerable are a version of the rich young man, for whom entry into the kingdom is so hard, yet not impossible (we have the counter-example of Zaccheus).

Since most of us will exercise some form of authority in some dimension of life, as parents, coaches, managers, leaders, committee chairs or in other forms of leadership that draw upon our capacities for meaningful action and expose us to meaningful risks, this is an important book for both our flourishing in such roles but for the flourishing of the broader communities we serve. It may be simpler to embrace one or neither of these two elements of the paradox, but this would be to sacrifice flourishing for a much smaller life for oneself and for those whose lives we touch. Living in the paradox seems more challenging, but somehow much richer. Clearly, Crouch has given us much to chew upon.

3 thoughts on “Review: Strong and Weak”