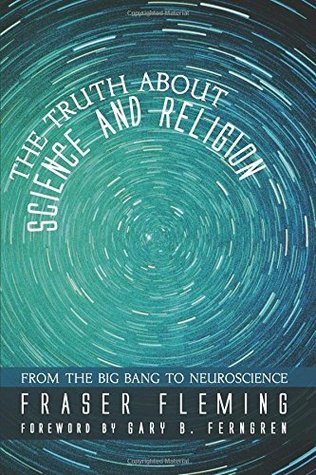 The Truth About Science and Religion, Fraser Fleming, foreword by Gary B. Ferngren. Eugene: Wipf & Stock, 2016.

Summary: A historical, scientific, and theological survey of the interaction of science and religion around the big questions of purpose, beginnings, the rise of life, the rise of human beings, the nature of mind and consciousness.

With this statement Fraser Fleming, head of the Chemistry Department at Drexel University, introduces this book which explores the intersection and interaction between science and religious faith, often thought to be a highly contended space. The author, however, explores the possibility that these two perspectives may be mutually enriching and together may give us a larger grasp on reality, though not without posing to us challenging questions that go to the core of what it means to be human and to exist in this world.

The first four chapters of the book survey what we know about the cosmology and biology of how we got here and the questions this poses and how science and faith have interacted around these. Chapter one considers the beginnings of the cosmos, the fine-tuning of the universe that has made the rise of biological life possible and the questions of whether this demonstrates a certain design and purpose inherent in the universe and how this is to be understood. Chapter two turns to the very beginnings of biological life on the planet, the emergence of cellular life from some form of pre-biotic soup, how the information code for all of life, DNA, arose, and eventuated in living cells. And how does all this relate to religious accounts including the early chapters of Genesis. Chapter three explores what is known of evolution from single-celled organism up to higher primates and explores the questions of whether randomness and natural selective forces are sufficient to account for the emergence of increasingly complex forms of life. The question is posed of how we are to understand pain and suffering, even before humans came on the scene. This, then leads to chapter four and the rise of human beings including homo sapiens, how we think about the development of religion, the existence of Adam and Eve. In each of the chapters of this section Fleming considers different explanations that have been advanced and ways religion and science have sought to address the fundamental issues of existence without arguing for or directing the reader to a particular conclusion.

Chapter five then takes a more theological turn, and particularly a Christian one, give the author’s own faith perspective. He considers the supernatural in the person of Jesus Christ, where he believes God and human experience intersect in the historical person of Christ. Under this heading he explores prayer, miracles, what he calls “the causal joint” (the intersection of the supernatural with physical processes in the world), and the resurrection.

Fleming then returns to science in chapter six, one of the longest chapters, in which he surveys science from its Egyptian, Babylonian, and Greek roots, and up through the contribution of Islam. He then chronicles the rise of modern science, which he considers significantly aided by Christian premises. He profiles key figures of the modern period from Copernicus to Kepler to Galileo (whose ego leading him to go afoul of certain religious figures may have been much of his problem), up through the differing beliefs of Newton, Darwin, and Einstein. He shows how each engaged religious concerns, and in various ways approached religious faith or skepticism.

Chapter seven then explores the presently emerging field of neuroscience which raises all kinds of questions of what makes us “us.” To what extent is our consciousness, our mental processes connected to the neural networks of our brains? How are we to understand free will? What do we make of mystical and near death experiences, and what of us survives our deaths? From here, we move in chapter eight to a kind of summing up of the different models of how science and religion have engaged, from warfare (actually less common than thought), through separate spheres of inquiry to some form of integration of science and religion. The question is whether religion makes any difference. And this leads to the concluding epilogue where the author relates his own journey to Christian faith, and while admitting that other may see things differently, invites people to explore and seek for themselves.

What I appreciated about this work by a committed Christian was the even-handedness with which he dealt with science, religion, and their interaction. It is clear that as a scientist, he takes scientific inquiry seriously, is willing to look honestly at different explanations, consider hard questions, and leave room for differing conclusions. While it is clearly evident that the author would hope others follow him in embracing Christian faith, one never feels a pressure to do so or that one is being proselytized. I was struck with his honesty posing hard questions, for example why God’s revelation of himself comes so late in human history, and why there is so much pain and suffering before “the fall.”

This spirit of honest exploration of these important questions continues in the discussion questions at the conclusion of each chapter and the diverse recommendations for further readings reflecting a spectrum of views. His discussion presses skeptics, explorers, and people of faith to go deeper and wrestle with tough and important questions. I would highly commend this to groups of faculty, or others who are scientifically literate who are concerned about how science and faith address the most important questions of existence.

4 thoughts on “Review: The Truth About Science and Religion”