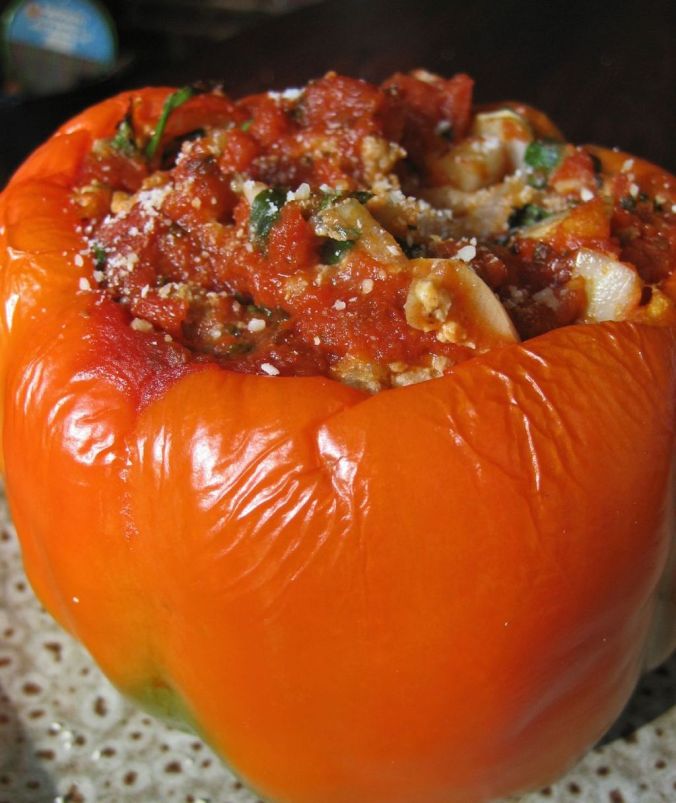 About this time of the year or even sooner, gardeners in Youngstown would be overwhelmed with peppers of all varieties — banana, Hungarian, chili and bell peppers. The question, especially with the last was what to do with them. Sure you could cut them up in strips, dip them in a good dip mix, and munch on them. But the favorite solution at many Youngstown tables was to stuff them.

I have to say that as a kid, I liked the stuffing more than the peppers when they had been cooked. I think I actually liked peppers better in the raw. If I could get away with it, I’d eat out the stuffing and leave those limp cooked peppers on the side of the plate. But if mom was there, she’d insist I eat the peppers. The trick was to get enough stuffing to minimize the taste of the pepper in each bite but to stretch the stuffing to last the whole pepper.

The basic recipe was big blocky bell peppers with the tops removed and the seeds and inner membranes removed. Then you created a stuffing of cooked rice, browned ground beef, tomato sauce, Worcestershire sauce, and seasonings (every cook has their own preference). Then the stuffed peppers are baked in an oven for roughly an hour. A good example of a recipe that looks like the stuffed peppers I grew up with can be found at allrecipes.com.

But the great thing about stuffed peppers are that there are all kinds of ingredients you can substitute. My wife makes a meatless recipe with chili beans, corn and salsa as the principle ingredients. Both to add taste and eye appeal, some melted cheese on the top with a parsley garnish is a nice touch. Various meats or no meat at all can be used. I’ve seen recipes with yogurt, shrimp, eggs and cheese, chili stuffing, quinoa, orzo and more. Basically, if you can put it in a pita, an omelette, a burrito, or a fajita, you can put it in a pepper! I found this site on Pinterest supposedly with 1000+ ideas.

Then there are different kinds of peppers you can use. Beyond the tried and true bell peppers there are Hungarian peppers, chili peppers, poblano peppers, jalapeno peppers and more. It seems that people stuff peppers all over the world!

It makes sense that stuffed peppers would be a Youngstown staple. They consist of basic, inexpensive ingredients that when put together make a tasty, sustaining meal. And they use up all that garden produce!

[Want to read other posts in the “Growing Up in Working Class Youngstown” series? Just click on “On Youngstown” here or on the menu!]

7 thoughts on “Growing Up in Working Class Youngstown — Stuffed Peppers”