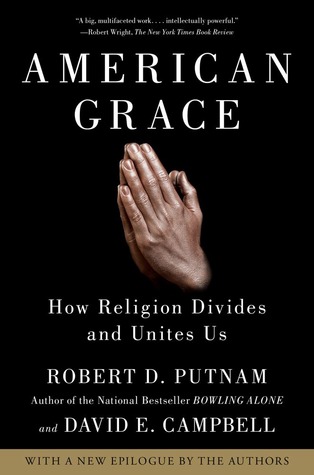 Summary: A sociological study of the landscape of American religion, the connections between religious and political attitudes, and changes between 2006 and 2011, when the newest edition of this work was published.

If my Facebook newsfeed is any indication, we do not heed, at least on social media, the old social dictum of refraining from discussions of religion and politics in social situations. What I think this reveals is the vibrant and diverse religious and political landscape in the United States, a landscape explored at great nuance in the sociological study represented in this book.

The book combines vignettes of congregations and detailed results (with tables and bar graphs) from the Faith Matters survey results. The authors begin with a survey of religious history, particularly twentieth century religious history, particularly the post-World War 2 boom in religiosity, the first decline in the Sixties, a later boomlet in the Eighties, and more recent declines. Then, mixing vignettes with survey results, they explore the shifting religious scene: old fashion and newer congregations, traditionalism and change around gender and ethnicity, and the role of politics in religious congregations.

Broadly speaking, the authors see an increase in what they call a tolerance, a friendliness with those who are different that includes everything from greater acceptance that people of other religions will also go to heaven to acceptance of same sex relationships. They attribute this at least in part that many have an “Aunt Susan” or “pal Al” who are one of these “differents.” It is this that the authors consider “American grace”–an increasing acceptance of the differences of religious expression and moral behavior in our communities. At the same time, the authors find that there is still a deep divide politically and that this maps along lines of religiosity, even though most churches do not make politics an overt aspect of worship and congregational life with any frequency, and even less so between 2006 and 2011.

One of the more sobering passages for religious teachers is one where the authors were presenting results around theological belief of denominational participants to a group of conservative Missouri Synod Lutheran leaders. It was very clear that on many matters, congregants were for more liberal, and indeed had departed from orthodox belief. This is a broader finding for many of the respondents from Christian backgrounds, whether Catholic, mainline, or evangelical. What it appears is that there is a cultural religion that is gaining ascendancy that reflects a religious consensus on faith and morals quite different from the theological stance of our church bodies.

This brings me to a terminology difference with the authors. They speak of seeing an increasing “tolerance” toward the religiously different, and toward moral stances once deemed unacceptable. I do not disagree with the fact that such tolerance is a good thing but with how they are using the word tolerance. They are using the word tolerance for what is really a growing cultural consensus, or common cultural religion, where people are saying that formal differences between faiths or around certain questions of morality don’t really matter in our practiced belief and behavior.

Tolerance historically had to do with where we have disagreements and how we act toward those with whom we substantively differ on matters of belief and/or behavior. That can be how someone who is liberal in political or religious beliefs acts toward someone who is conservative, or vice versa. Tolerance has nothing to do with what one believes or, within certain boundaries, how one behaves (I hope we would agree that there are some behaviors that must not be tolerated such as murder or rape or theft, for example), but rather whether we respond graciously or censoriously toward those who differ. I am troubled with the way these authors use the term tolerance, because it assumes that sincere believers who do not believe that others may share one’s heaven while holding different beliefs, or that fail to approve some culturally accepted behaviors are intolerant, no matter how they act toward those who differ. Likewise, a person may be thought tolerant even while acting censorious toward a person whose beliefs they deem “intolerant.” This seems to me a decided and concerning shift of language.

The epilogue of this book summarizes a follow-up study in 2011 that included part of the 2006 cohort as well as younger respondents who were not of age for the first cohort. This survey showed that on the whole, religious beliefs were marked stable, while detailing a growing trend toward those who would not identify with any belief, introducing the idea of “nones” into a conversation about religion in America, as a decidedly growing category. They document a decided movement on the part of the youngest generation away from religious faith, as well as continued growth in the trends around respondents views on questions of belief and behavior toward the new cultural consensus noted above. It also revealed that both political parties as well as the “Tea Party” are disliked more than any religious group.

Coming off the 2016 election, there are some important implications I draw from this book. One is that it explains the almost universal revulsion I’ve found among young people, religious or not, for white evangelicalism’s overwhelming (81 percent) support of the Republican candidate, and why young people are leaving this movement in droves. It also presents a challenge to those of us who seek to teach and pass along the faith. Peter Drucker was known for saying that “culture eats strategy for breakfast.” I would contend that culture is also eating belief for breakfast and that this has come through the redefinition of the language of tolerance (and intolerance) discussed above where tolerance must define not only our behavior, but in fact our beliefs. My sense is that religious communities must figure out ways to compellingly embody what they believe, or they will come to the place where they throw up their hands and say, “we got nothing.”

What troubles me most is that the “American grace” being described in this book is nothing like the “Amazing Grace” of which John Newton writes. Amazing grace is the marvel that what was “wretched” and “lost” and “blind” can be saved. “American grace” I fear, would just say these are intolerant labels, that you are fine the way you are, and offer no hope that life should be any different. Sure, avoiding intolerance is better than the alternative, but it doesn’t offer much if you are looking for a reason for hope. As a sociological study, there is much that deserves our attention. But as a prescription, and not only a description, of American cultural religion, American Grace is wanting.