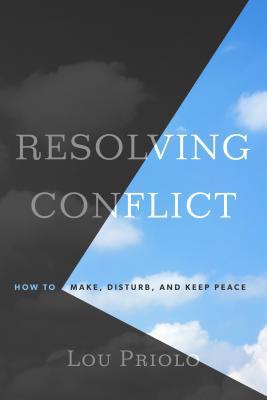 Summary: A practical guidebook to the biblical prerequisites and principles of resolving conflicts between Christians both in home and church contexts.

It might be said that wherever two or more are gathered there is conflict. It is part of the human condition and just because one is a follower of Christ does not mean you can escape conflict. We can try to avoid it, or we can do it very badly. Lou Priolo argues there is a better way and that is to do it biblically, which offers the potential of making peace with each other and going deeper in shared community together.

Priolo begins by outlining four biblical prerequisites to conflict resolution: humility, gentleness, patience, and forbearance. He devotes a chapter to each, surveying the scriptures that speak of these qualities. Priolo argues that these chapters are actually the most important of the book. The last, loving forbearance, is especially important where sin is not at the root of the conflict. People may just be different from each other and sometimes learning to bear with and even begin to delight in those differences can circumvent many conflicts.

At the same time, that is not always possible, so how does one, embracing the four prerequisites, resolve conflict? The next ten chapters get very practical with the “how” of conflict resolution. He begins by distinguishing three kinds of conflict: those over differentness, those over sinfulness, and those over righteousness (where we disagree about what is right). He explores how love communicates, how we respond to reproof, the heart motives behind conflict, ways we respond unbiblically to conflict, good questions we can ask to resolve conflict, how far to go in a conflict, and the importance of doing all we can insofar as it depends on us to resolve conflict.

In addition to the prerequisites, this book assumes three things about the reader. One is that you are really serious about resolving conflict, serious enough to taking a hard look at your own contribution to a conflict, to face the ways you have sinned against another, and to be willing to take personal steps to change. Second is that you really want your life to be shaped in detail by the teaching of scripture regarding conflict, as well as in other matters. Every chapter includes detailed biblical material and Priolo wants to call things, particularly our sins, according to what scripture says. Finally, this book assumes you are willing to do some hard work, first in self reflection through checklists and journalling exercises, and then in conversation with another.

For those with familiarity with various forms of Christian counselling, Priolo is a disciple of Jay Adams. The book reflects a rigorous Reformed perspective including frequent quotes of one of the best of the Reformers, Richard Baxter, and in marriage relationships assumes a complementarian perspective, though not aggressively advancing this. One need not share these perspectives to benefit from the counsel and exercises Priolo provides. His discussion of the prerequisites for resolving conflict and the exercises that prompt self-reflection would seem helpful regardless one’s theological persuasion.

The style is highly readable and one gets a clear sense of the author’s voice. It may not be the reader’s and the author encourages people to put things in their own words, not just mimic his. All told, this is a useful resource for conflicts in homes, and in the church.

One thought on “Review: Resolving Conflict”