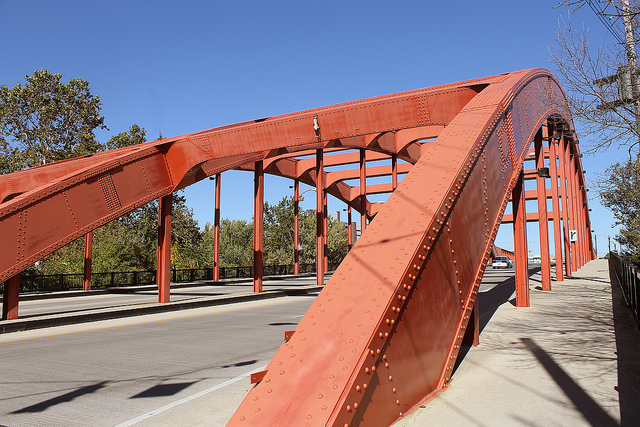 Youngstown was, and is, a city of bridges. Even without the many scenic bridges in Mill Creek Park (the subject of previous, and maybe future posts) the city has a rich heritage of bridges. When I was young, my early bridge memories were driving down Mahoning Avenue to downtown, and until the mid-1960’s, to church. We would cross the Mahoning Avenue bridge by Mill Creek Park, just west of the Isaly dairy plant, go under a huge concrete railroad bridge as we approached town, and then over the Spring Common Bridge to reach West Federal Street. If we went ahead and veered slightly left, we’d go up Fifth Avenue, over another set of railroad tracks.

Later on, when I went to Youngstown State, dad would sometimes cut over on N. West Avenue and cross the single lane bridge over the river there, which avoided going through downtown. Then we’d taken Rayen Avenue over to the university. Every time we crossed that bridge, I’d say a prayer, both that we wouldn’t meet a car coming the other way, and that the bridge wouldn’t fall into the river while we were on it. I understand that this bridge was finally closed in 1997.

My grandparents used to live on the South Side, and sometimes I’d go into town with them. We drove over the Market Street Bridge, which must have been one of the longest bridges in the city. You could look up and down the river and see the various factories and mills along the river. Downtown and Central Square were straight ahead. If you kept going you ascended a bridge on what had become Wick Avenue, with the First Presbyterian Church at the top of the hill. Coming back from downtown to the south side, you knew you had made it over the bridge when you went past the GE light bulb plant on the right with the big lit sign.

There was also a steel footbridge over the old Erie Lackawanna tracks connecting Wood Street and the downtown. It was exciting to watch the trains pass underneath. That bridge, along with the railroad tracks are now gone. The closest thing to it are stairs descending from Wood Street to North Phelps Street next to where Rust Belt Brewery is located.

Some of the most dramatic bridges crossed over the river and passed through the mills. There were bridges like this going through both the Ohio Works and the Campbell Works if I remember. My wife talks about riding the bus to school at Sts. Cyril and Methodius, watching molten steel pour from the big ladles, and also watching wastes in all sorts of putrid colors pouring into the river below them as they drove over. You almost wondered as a small child if you were driving into Hell and wondered if you would come out the other side, or not.

Later on, the freeways came, and with these the “Blue Bridge” on the Madison Avenue Freeway running north of downtown by St. Elizabeth’s and past Youngstown State. It was called the “Blue Bridge” because of the blue paint job, which at times was more faded blue and rust.

Some of the bridges are no more. Some have been rebuilt, more than once in the history of Youngstown in some cases. Some remain but are no longer used. No doubt someday these will be destroyed. But as long as a river runs through Youngstown, as long as trains pass through the city. As long as freeways pass over or under surface streets, there will be bridges–some functional, some pleasing to the eye, some a tribute to Youngstown’s industrial past.

14 thoughts on “Growing Up in Working Class Youngstown — Bridges”