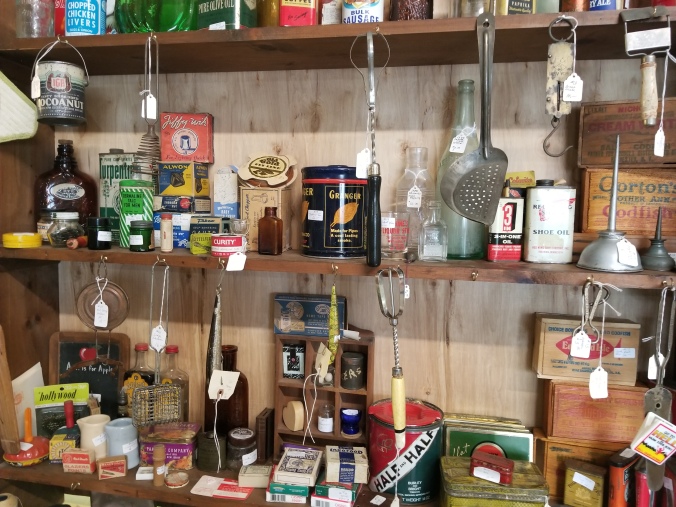 There were several summers where my dad was commuting between Youngstown and Baltimore, and it was a help to my mom for me to spend part of the summer with my grandpa and grandma Trube. Recently, we were at an antique mall and saw the scene in the photo, and it brought memories flooding back of one of my favorite things at my grandparents.

My grandpa’s garage was not only the place where he sheltered one of his Chevys, but it was also a fascinating museum of odds and ends. Yes there were oil cans and tobacco cans like the picture. There garden and lawn tools, a workbench, and that faint smell of gas and oil and grease.  And pinned or hanging on the walls were all sorts of memorabilia from all the places he and my grandmother had traveled to. Soap from a motel. A placemat from a restaurant, a matchbook from another. A tourist brochure from Knott’s Berry Farm. A program from a baseball game. A fold-out map from a gas station. There were old license plates from different vehicles he’d owned. Sometimes, I’d just go in there and ask him about one object after another, fascinated with the interesting life he’d led.

When he got tired of answering my questions, he’d find a tennis ball, and we throw the ball back and forth in the driveway. I had coke bottle glasses and not the greatest eye-hand coordination and over those times, I got better, even while I imagined myself as my pitching hero, Sandy Koufax.

At other times, he would back up his Chevy Impala out of the garage, and we would wash the car together. Mostly, he let me wash the wheels and scrub the white wall tires and scrub the chrome while he washed and polished the body. Then we’d stand back together and he would say something like, “looks like new.” He loved his cars and loved to drive. I went on my first real trips with him, to Pittsburgh to see the Pirates at Forbes Field, and, one summer, to Gettysburg.

Usually when we were done, we were thirsty. I think my grandpa probably had a beer while my grandmother served up some of her ice cold homemade lemonade. Whatever we had sure hit the spot.

Those were wonderful summers, too few to be sure before first my grandmother, then my grandfather passed. It’s funny how memory works, how a display of old stuff in an antique store brings memories of over fifty years ago flooding back. My grandfather’s garage was a window into his life, and a place of companionship where I got to know my father’s father. In one sense, it was nothing special, yet it meant the world. Grandpa’s garage.