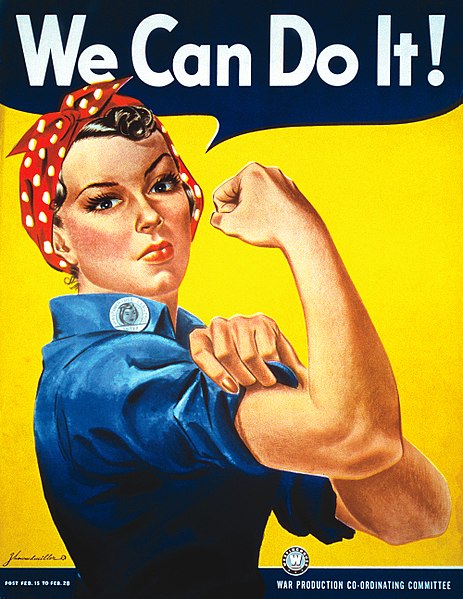 The woman who was the inspiration for the iconic “We Can Do It!” poster, often nicknamed as “Rosie the Riveter,” died this week at the age of 96. Naomi Parker Fraley was the subject of a photograph that inspired Westinghouse artist J. Howard Miller’s inspirational poster, originally designed to boost morale in Westinghouse plants during World War 2. There was actually some controversy about the identity of “Rosie” and this Time article summarizes how they figured out who the real “Rosie” was. The poster went viral, and has come to be an icon for the empowerment of women in the workplace.

Youngstown was one of the “arsenals of democracy” supporting the war effort during World War 2 and there were a number of “Rosies” who contributed to that effort. My mother-in-law was one of them. She often spoke of her work during the war as an inspector with one of the aircraft part suppliers in Youngstown. She wasn’t a riveter, but rather inspected the riveting work of other workers, many of them women. She talked of getting people angry when she’d send an assembly back because of improper rivets. Her attitude was that the boys “over there” depended on them getting it right.

From what I’ve been able to learn, two of the places where aircraft parts were manufactured were General Fireproofing and Steel Door. At Steel Door, they manufactured fuel tanks for the aircraft. I also found this Mashable site with a color photo spread of real life “Rosies” in aircraft manufacturing during World War 2. Unfortunately, there were none from Youngstown.

Women filled the spaces in the workforce opened up by men who went away to serve. The steel mills in Youngstown ran three shifts and prospered during this time and there were a number of positions filled by women. Women filled between 8 and 16 percent of the production positions, particularly in rolling mills, fabrication, finishing, and shop maintenance.

Helena Auguston was one of the contributors to Youngstown State’s Oral History Program. During World War 2 she worked for a year at the Ravenna Arsenal making detonator caps for artillery shells. Then she worked for the remainder of the war at Republic and Copperweld, mostly as a crane operator. Here is a portion of her interview with William M. Kish of her experience: 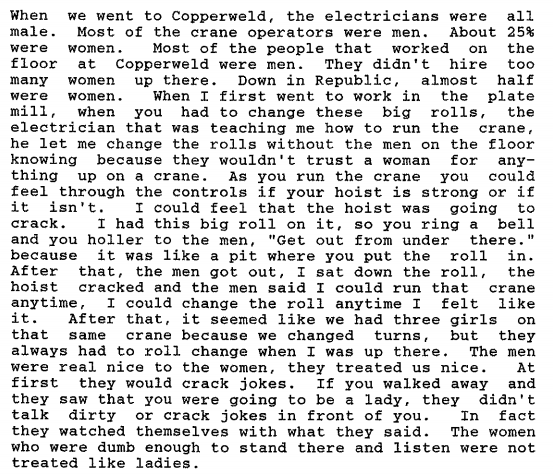 Some, like Helena, returned to homemaking after the war. But many did not. They joined unions and advocated for women’s rights in the workplace. It clearly changed perceptions of what women were capable of doing and began to break down the divisions of work into “men’s work” and “women’s work.” This also began to change relations between husbands and wives as women no longer depended on a male wage earner, and how children were raised.

These women are some of the “unsung heroes” of World War 2. Youngstown played a huge role in the war effort, and women played a significant part in that effort, one that it seems appropriate to remember with the passing of the original “Rosie the Riveter.”

I’d love to hear some of your stories of women in your family who worked in Youngstown area factories during World War 2.