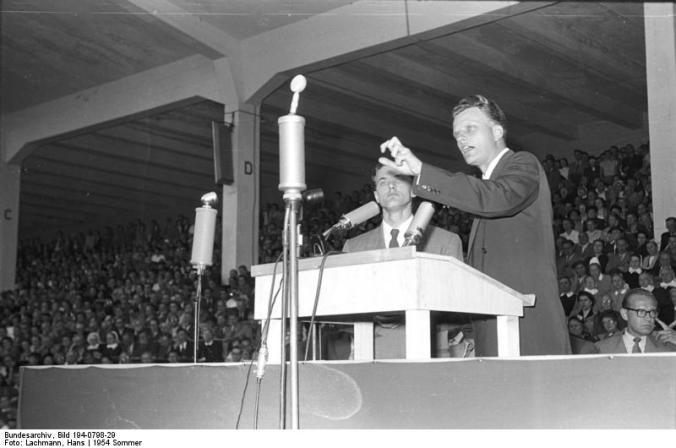 A Publishers Weekly story called to my attention that this is Billy Graham’s centennial year. If his health holds, he will turn 100 on November 7, 2018. The article noted that there are new or updated books that will be released this year by scholars William Martin and Grant Wacker and more popular books by his grandson William and former Graham associate Lon Allison. Edit Blumhofer is working on a book on Graham’s use of gospel music at his crusades, and Ann Blue Wills will publish a work on the life of Ruth Bell Graham titled An Odd Cross to Bear. Martin’s book apparently will also explore the impact of Graham’s son Franklin on his legacy.

At a time when many are questioning whether evangelicalism has a future, or whether to identify as an evangelical, it is oddly fitting and paradoxical that this attention is being given to the figure who as much as anyone defined American evangelicalism. His educational journey traced his journey from fundamentalism to the beginnings of evangelicalism, leaving Bob Jones University after a year because of its legalism to attend Florida Bible Institute and then finishing his education at Wheaton College. He started out as an evangelist with high school ministry Youth for Christ and launched his first “crusade” in Los Angeles, gaining national attention due to William Randolph Hearst’s decision to “puff Graham.”

His crusades reached across denominational lines, drawing criticism from fundamentalists. He pioneered use of media with his Hour of Decision radio broadcasts (to which I listened growing up) and with his television broadcasts of crusades. He helped found Christianity Today, the flagship publication of evangelicalism. He de-segregated seating at his crusades and included black leadership in his crusades as early as 1957. Joining with British preacher John R. W. Stott, they worked together to host the 1974 International Conference on World Evangelization in Lausanne, Switzerland, propelling global efforts from every nation to every nation to advance the Christian message, making evangelicalism a global movement.

For better or worse, his close relationship with American presidents also established a pattern of engagement between evangelicals and politicians. It was clear in later years that he felt betrayed by Richard Nixon’s behavior in Watergate, including his profanity. They reconciled in later years. He spent extended times in Lyndon Johnson’s White House and prayed with every president from Truman to Obama. This was remarkable in a way after the rise of the Religious Right. It will be interesting to see the judgment of history on his involvement with Presidents.

Graham’s ministry had a shaping influence on my own life. His Hour of Decision broadcasts that we listened to every Sunday night during my childhood made it clear that there was a decision to be made about Christ, and that this was the most consequential decision in one’s life. While I did not “go forward” at one of his crusades, having made my “decision” at a Vacation Bible School at age 10, I saw him speak on seven occasions. The first was at the 1970 crusade in Cleveland at the old Cleveland Stadium, with a busload of kids from our church. On five occasions I heard him speak at InterVarsity’s Urbana Missions Conventions in 1976, 1979, 1981, 1984, and 1987. (Altogether, he spoke here on nine occasions. Here is a short video clip from his 1961 message). The last time I heard him speak was at the old Cooper Stadium in Columbus in 1993. I still have a poster from that in my office. When his associate evangelist Leighton Ford spoke in Youngstown, in the 1970’s, I was a counselor and the training they offered helped me in leading others to faith.

He continued to minister to my family even in retirement. My mother passed in 2010. My father was struggling with the loss and how to make sense of what was left of his life. In 2011, Graham published Nearing Home: Life, Faith, and Finishing Well. My dad always had deeply respected Graham and he read the book over and over again and spoke of how much it helped him. My dad finished his own race in 2012 and Graham’s book helped him in his last couple years to finish well.

It remains to be seen the course the movement he nurtured will take in coming years. Historians and religious scholars will no doubt have differing opinions on his personal influence on that movement, and I suspect not all will be favorable. It’s the lot of the best of us to both hit our limits and prove our fallibility. Perhaps all any of us can do is to be found faithful in our callings. By this standard, Graham is finishing out his century well. Not too long ago, commenting on his Parkinson’s disease, he said,

“Someone asked me recently if I didn’t think God was unfair, allowing me to have Parkinson’s and other medical problems when I have tried to serve him faithfully. I replied that I did not see it that way at all. Suffering is part of the human condition, and it comes to us all. The key is how we react to it, either turning away from God in anger and bitterness or growing closer to him in trust and confidence.” (Source: 40 Courageous Quotes From Billy Graham)

Personally, while recognizing aspects of his life that might be criticized, at the end of the day, I find myself saying, “thanks be to God for Billy Graham.” I suspect for him, though, the only praise that matters is the Master’s “well done, good and faithful servant.”

Update 2/21/2018: Little did I think five days ago when I published this post that we would be saying farewell to Billy Graham so soon. This morning, Billy Graham discovered the truth of the hope he preached for over 50 years and heard his Master’s “well done” as he passed through death to life everlasting.

One thought on “The Billy Graham Century”