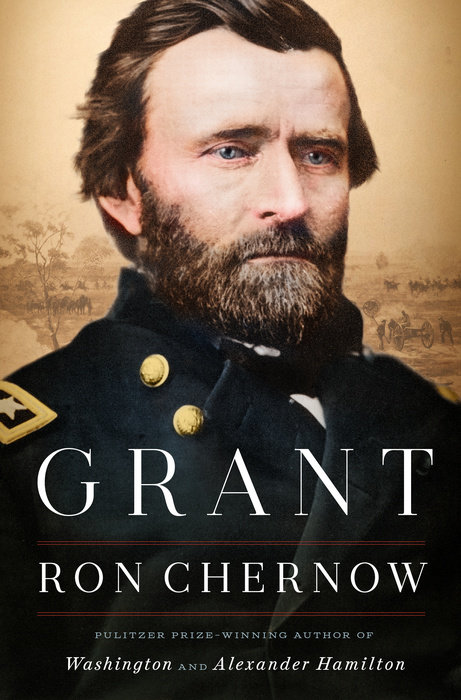 Summary: A biography on the life of Ulysses S. Grant from his Ohio childhood, his years of failure in business, his rise during the Civil War, his presidency, and later years, including the completion of his memoirs as a dying man.

Many people know the work of Ron Chernow from his great biography, Alexander Hamilton, which served as the basis of the Broadway play, or his biography, Washington: A Life. Chernow has done it again in this biography of Grant, which will likely raise Grant in the rankings of presidents, and establishes Chernow as one of the premier presidential biographers. I honestly can’t say enough good about this book. It is rare to come to the end of 960 pages and wish there were more. I have his Washington: A Life on my TBR pile and will move it up!

Chernow gives us a Grant caught between the ambitions and expectations of father, father-in-law, and socially ambitious wife. It is little wonder in some ways that he struggled with drinking, which Chernow explores throughout the book. Grant quietly resigned from the Army in the early 1850’s likely because of drinking problems on a backwater post in the Pacific northwest. He was a failure at farming a plot of land provided by his father-in-law, and unhappy running a store owned by his father under his younger brother in Galena, Illinois, and continued to struggle with drink. One heroic aspect of Grant’s life was his gradual mastery of this problem during the Civil War (with occasional lapses) and in his presidency (where he remained sober) and later life. The vigilance of his aide, John Rawlins, and wife Julia certainly helped, but Grant’s own eventual mastery is evidence of the resolute nature of this man.

Chernow explores the complicated nature of this man, who seems a bundle of contradictions. He could keenly recognize the opportunities of a battlefield situation and the outlines of grand strategy that led to victory after victory culminating in Appomattox and yet could not assess the character of his closest associates, who often betrayed his trust, in war, in his cabinet, and at the end of his life, when he was bankrupted by Ponzi-schemer Ferdinand Ward.

He could seem like someone with low energy and little drive until a crisis, where he would remain calm, and give decisive direction. He was the first general Lincoln found who would take the fight to the enemy and ruthlessly prosecute it to the end, gaining the reputation of being “Unconditional Surrender” Grant. Then he grants magnanimous peace terms to General Lee and his troops, for which many gave him their undying respect. In later life, touring Europe, he at once dazzled people with his grasp of military history and strategic concepts, showing far more brilliance than people credited, and yet he had no desire for reviewing troops, having seen more than enough of this in his time.

His presidency as well was a bundle of contradictions. His administration was a mix of men of integrity, and corrupt friends, who tainted his reputation as their corruption became evident. Most noteworthy, and a theme of Chernow’s was his vigorous efforts both during the Johnson administration, and in his presidency, to protect and extend Reconstruction, including Black voting rights and office holders, while healing the rift with the South that led Frederick Douglass to write this in summary of his career: “In him the Negro found a protector, the Indian a friend, a vanquished foe a brother, an imperiled nation a savior.” John Singleton Mosby, a Confederate general wrote on learning of his death: “I felt I had lost my best friend.”

In addition to Reconstruction, his skill in avoiding war with Great Britain over the Alabama, turning it into an occasion to cement the alliance with Great Britain we enjoy to this day, his management of the nation’s finances in paying down war debt, and his fostering of economic growth outshine the corruption of his associates, who he defended at first, but then dealt with when evidence was clear that they had betrayed his, and the public’s trust. His administration was probably better than the taint of scandal that has come down to us. As Chernow notes, he loved his friends too well rather than wisely.

He was a man of few words, except when unbending with close friends. His orders and his speeches were models of clarity and concision. Yet this same man, dying of cancer of the throat accomplished the stupendous feat of writing the 336,000 words in his final years, finishing them just before he died. Many critics consider the Memoirs the one of the greatest works of this genre, described by Chernow as written in a “clear, supple style.” Apart from minor changes of punctuation and grammar, he needed little editing. Writing this work, motivated in significant part to provide for his family after the financial debacle with Ferdinand Ward left him nearly penniless, was perhaps the most courageous act of his life, as he struggled on in great pain and increasing weakness. He finished the work on July 16, and died a week later on July 23, 1885 at age 63.

All this, and so much more, you will find in Chernow’s Grant. Chernow, while cognizant of Grant’s faults, doesn’t bury Grant’s greatness in his failings. He proposes that there is far more to this General and President than we have credited. And as a writer, he celebrates another writer, whose Memoirs are going on my reading list!