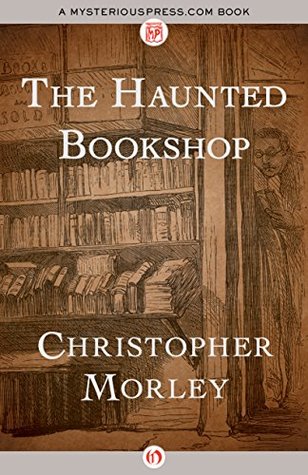 Summary: A mystery in a bookshop, involving a book that keeps disappearing, a wealthy businessman’s daughter, a young advertising salesman, a gregarious bookseller, and a German pharmacist.

What could be better for a bibliophile than a mystery in a bookshop? This classic by Christopher Morley begins with a young advertising salesman, Aubrey Gilbert, trying to sell advertising to the eccentric and voluble New York bookseller, Roger Mifflin, proprietor of Parnassus at Home a.k.a The Haunted Bookshop. In an explanation posted in the store, it is explained that “THIS SHOP IS HAUNTED by the ghosts of all great literature.” Gilbert fails to sell advertising, but stays for dinner, listening to Mifflin share the first of several discourses on the mystique of books and bookselling that run through the book. Here is a small part:

“My business, you see, is different from most. I only deal in second-hand books; I only buy books that I consider have some honest reason for existence. In so far as human judgment can discern, I try to keep trash out of my shelves. A doctor doesn’t traffic in quack remedies. I don’t traffic in bogus books.”

The bookshop seems to be haunted by more than ghosts of great literature. A book requested by a bearded customer written by Thomas Carlyle on Oliver Cromwell is missing. Throughout the story, the book, a favorite of Woodrow Wilson, will reappear and disappear several times in the course of the story. When Gilbert returns with a lost and found ad for the book placed, not by Mifflin, but by a chef at a nearby hotel, a chef Gilbert had run into, holding the book he had advertised as lost, the mystery deepens as they puzzle over what could be going on. While mystery is deepening, love is blossoming. Mifflin has agreed to allow young Titania Chapman, the daughter of a wealthy businessman with whom Gilbert has an account, to get experience working in the shop, at the request of her father. The moment Gilbert meets her he is smitten.

He is also caught up with the puzzle of the missing book, which only deepens when he finds the cover, minus the book, sandwiched in some books in Weintraub’s drugstore, Weintraub being the bearded gentleman who had called that first night when Gilbert and Mifflin met. Before he can make it home, he is nearly thrown off a bridge into the river, suffering a blow to his head before onlookers come to his rescue. Worried about Titania, he takes a room opposite the bookshop. When he sees Weintraub go into the store after hours, using a key of his own, he assumes that Mifflin is in on the plot, perhaps to kidnap young Titania for ransom, or worse, the book being a way of communicating.

The real truth is far more sinister. Until Gilbert and Mifflin tussle on a Philadelphia street, Mifflin is blissfully unaware of what is swirling about him, lost in the wonders of books, and Gilbert woefully mistaken. Back in New York, Weintraub has left a suitcase of books with Titania for a caller. Both suspect that they were lured to Philadelphia to set up something far more serious and that the suitcase is dangerous. Will they get back in time? And what is in the suitcase? And how does it all relate to the mysteriously disappearing volume of Carlyle?

This was a delightful good time, with diverting soliloquies by Mifflin on books and scenes of domestic bliss with his wife and little dog Bock. One of the most amusing chapters was the Corn Cob Club, a gathering of booksellers discussing the trade. In this instance they debate whether booksellers have an obligation to steer customers to quality works, or simply sell what they want. As you might guess, Mifflin was in the former group. In another soliloquy, he declaims:

“You see what I’m driving at. I want to give people an entirely new idea about bookshops. The grain of glory that I hope will cure both my fever and my lethargicness is my conception of the bookstore as a power-house, a radiating place for truth and beauty. I insist books are not absolutely dead things: they are as lively as those fabulous dragons’ teeth, and being sown up and down, may chance to spring up armed men.”

He dreams of stocking a fleet of traveling Parnassus stores that will scatter through the country. Although Mifflin appears to be a bookstore version of Don Quixote with dreams of grandeur, how many of us have felt some of the same things as we prowled the aisle of a wonderful old bookstore? Yet he bests younger Gilbert, and awakens to the real world dangers facing young Titania. But will he make it in time?

For those familiar with the real world of books, you may know of author Ann Patchett’s Parnassus Books in Nashville. As far as I can tell, Morley’s story was not the inspiration for the store’s name. Rather, as best as I can tell, they go back to a common source, the significance of Mount Parnassus in mythology as the home of the muses, or in the words of the real Parnassus Books, “In Greek mythology, Mount Parnassus was the home of literature, learning, and music. We are Nashville’s Parnassus, providing a refuge for Nashvillians of all ages who share in our love of the written word.” It seems that Parnassus at Home was Roger Mifflin’s (and Christopher Morley’s) realization of the same dream.

One thought on “Review: The Haunted Bookshop”