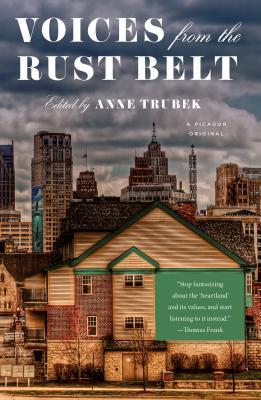 Summary: A collection of essays from those living, or who have lived, in Rust Belt cities from Buffalo to Chicago, and Flint, Michigan to Moundsville, West Virginia.

I grew up in the archetypal Rust Belt town of Youngstown and write about that experience (you can find all my posts in the “On Youngstown” category on my blog). I left before it acquired the Rust Belt name, in 1976. Back then, it was the “industrial heartland” until the industrial part was gutted in the late 1970’s and early 1980’s. I witnessed the effects in three of the cities I’ve lived in, Toledo, Cleveland, and Youngstown, and so was naturally interested in reviewing this collection of essays from those with connections to the Rust Belt cities of the Midwest, from Chicago to Buffalo.

The book is organized into four sections, the first of which was “Growing Up,” which coincidentally opens with an essay from a fellow Youngstown native, Jacqueline Marino. She writes of childhood visits to her grandmother on South Pearl St, covering her mouth as she crossed the Market Street Bridge near the steel mills, and then the changes she saw in her grandmother’s neighborhood and the city as the mills closed, the influence of organized crime in the city (everyone played “the bug”), and the rich memories that she carries to this day of her Italian grandparents kitchen and the oasis it provided in a gritty city. The essay is followed by a Detroit native talking about white flight and the ‘kidnapped children’ who disappeared as families fled the city, a white Clevelander talking about the positive impact of busing on her life, of ethnic hatreds in a Jewish neighborhood in Buffalo, growing up on an Ohio River town home to the West Virginia Penitentiary, and the theft and recovery of a bicycle in Flint.

The second group of essays traces “Day to Day in the Rust Belt” and makes it clear there is no single Rust Belt story. There is the middle-aged social worker in Pittsburgh trying to help a down and out alcoholic when his agency cannot. There is the young life lost to street violence in Flint, the separated couple, both coming out of substance abuse, one more successfully than the other, trying to care for a daughter, remain civil with each other, and pull their lives together. There is an essay on the contrast between Buffalo “boosterism” and the black communities that are more or less left out, the odd phenomenon of a white arts culture thinking they will find salvation, as well as low rent, in Detroit. Finally, we learn about a thriving Iraqi community in Cleveland, one of many such ethnic communities aborning in the Midwest.

The third section explores “The Geography of the Heartland” beginning with a legendary gay bar in the Clifton neighborhood of Cincinnati, a visit to an old family home in Indiana (how many of us have gone back to old homesteads to find them derelict, or in my own case, vanished?), the “fauxtopia” of Henry Ford’s Greenfield Village and the contrast between the exurban dream Ford’s automobiles made possible, and the remnants of the city that was abandoned. Another essay attacks the artists who supplanted industrial workers in Cleveland for their pretensions when what has drawn them is the low cost of living (what is this thing against artists?). A descendent of the West Virginia McCoys reflects on the history of coal mining in the West Virginia Mine Wars Museum, a couple essays reflect on urban ecologies in Chicago and Cleveland.

“Leaving or Staying”–a dilemma faced by many Rust Belt natives is the subject of the last section. A young woman describes finding a delightful neighborhood in Lakewood only to flee it due to a failed love affair. A long-time Buffalo resident talks about the toleration of ex-pats only to become one. An Akron native describes staying in the former Rubber Capital. The collection closes with a poignant narrative of a father bathing his daughter in the lead-polluted water of Flint, Michigan, and the panic when she tries to drink some and what it is like when a basic necessity like water is so dangerous.

Nearly all the essays focused on personal narrative. One stood out as taking a larger look at the challenges of renewal faced by Rust Belt cities, titled “That Better Place; or the Problem with Mobility.” Written by a Cleveland Heights native, it describes the impacts of mobility and the consequences: too much retail space, housing, stressed tax bases, persistent segregation, how school ratings become real estate marketing tools (a particular problem in Ohio) and five proposals to address these challenges.

I noted earlier that there is no single Rust Belt story. While this is true, it was also striking that all these essays describe the problems and the struggle of displacement, of “making it” for those who live in Rust Belt cities. Perhaps the most hopeful story in the collection was of “Little Iraq” in Cleveland and the white woman who was positively impacted by busing. One thing such a collection makes clear is that “turnaround” stories often can be selective with whole populations left behind due to inferior schools and persisting patterns of racialization. Yet I also wonder where are the narratives of those who have overcome the challenges of the Rust Belt, who remember the past but are not trapped in it, and are rolling up their sleeves to make the most of the new economy. The essay by Jason Segedy on loving Akron comes closest to this with his refusal to look for the Next Big Thing (a temptation in all of these cities) and instead begin with “little plans” that might be scaled up with success. I just would have liked one or two essays by those who have done what he proposes. Where are these Rust Belt stories?

The Rust Belt is in my blood, probably literally. I’ve lived in some of these places, visited most of them, and the stories in this book give a cross-section of life as it was and is that is recognizable. Yet I also wish the collection would have captured more of the dynamism of those working to reclaim neighborhoods and mixed use zoning, to start new businesses, and to build a new civic life while sustaining the rich ethnic and cultural heritages of these cities, from cuisine to high culture.

When we lived in Cleveland, I used to joke that Clevelanders actually made up the jokes about Cleveland to keep everybody else away. I wonder if it is time for narratives that are honest about the challenges, but instead of keeping people away, or resenting those like artists who come, propose how our Rust Belt cities might be good places for those up for the challenge, be they artists, activists, businesses, inventors, entrepreneurs, crafts and tradespeople–or even writers!

Disclosure of Material Connection: I received a complimentary advance review copy of this book from the publisher via Netgalley in exchange for an honest review. The opinions I have expressed are my own.

One thought on “Review: Voices from the Rust Belt”