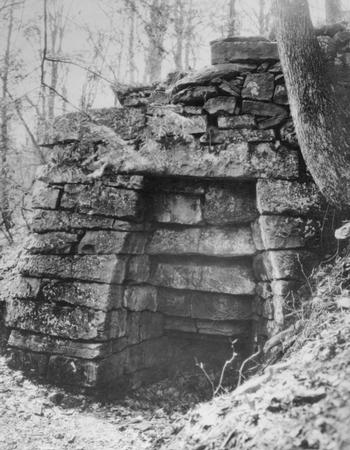 It all began here, as far as iron and steel making in the Mahoning Valley goes. In 1802, the same year that Youngstown was incorporated, James and Daniel Heaton (they later changed their name to Eaton) built an iron furnace along Yellow Creek, below Lake Hamilton, in present day Struthers. It was known as the Hopewell Furnace. It was the first such furnace in Ohio, which became a state the next year, and the first west of the Alleghenies, according to Dr. John R. White (who I had as a professor in several classes at YSU), who excavated the site over three seasons beginning in 1975.

Nearby deposits of kidney iron and coal, forests and that could be converted to charcoal, along with a water source, provided the necessary ingredients for the first iron blast furnace. White asserts that it is the first furnace to use a combination of bituminous coal and charcoal in the New World.  It was first “blown” in 1803 and the smelting operation produced approximately two tons of iron per day during the 275 days a year or so it could operate outside the winter season. The iron was cast onsite into Dutch ovens, kettles, skillets, trivets, andirons, stove parts and hearth grates. These were sold not only to local residents in the growing community but also in nearby Pittsburgh. The furnace became the leading employer in its immediate vicinity and was instrumental in the founding of Struthers.

“Hopewell” expressed the Eaton brothers optimism for this new enterprise. Unfortunately, both competition and depletion of a key resource led to the end of iron-making at this site by 1808. In 1806, John Struthers (after whom Struthers is named) and Robert Montgomery opened another furnace a little ways downstream. This furnace used a more efficient “blast” using water wheels and fans. In 1807 Eaton sold the Hopewell furnace and related interests for $5600 to Montgomery, Clendenin, & Co., who operated it until the following year. By this time the hardwood forests that provided the key ingredient for charcoal had been used up. The Montgomery furnace downstream operated until 1812.

The Eaton family went on to build the Maria Furnace in Niles in 1813 and the Mill Creek Furnace, in present day Mill Creek Park, some time around 1830 and it operated up until around 1850. Around this time, a new, high quality form of coal, known as block coal was found in the Brier Hill area and resulted in a new boom of iron making in the Mahoning Valley, paving the way for the later emergence of steel, stronger and more flexible in the late 1800’s.

It all began in 1802 at Hopewell Furnace. Access to critical resources, growing markets, and a workforce all played a part. Although Hopewell Furnace only operated for about six years, it was a rehearsal for an industry that would shape the life of the Mahoning Valley for the next 175 years.

15 thoughts on “Growing Up in Working Class Youngstown — Hopewell Furnace”