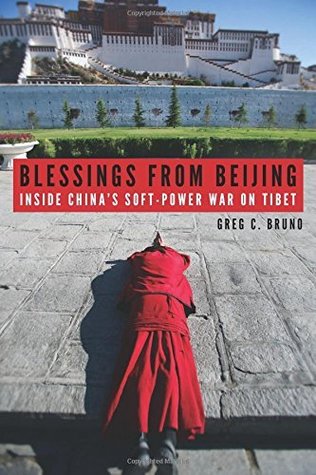 Summary: An exploration of how China is using “soft power” to undermine the Dalai Lama and the Tibetan refugee community he represents.

Before reading this book, I must confess I was unaware of the history of the Tibetan refugee community of which the fourteenth Dalai Lama is the chief representative, if no longer political head. After the civil war during which Mao came to power forming the People’s Republic of China (PRC), the Dalai Lama affirmed the sovereignty of China in return for a grant of autonomy for Tibet. Nevertheless, the PRC asserted increasing control, and eventually the Dalai Lama repudiated the agreement affirming the PRC’s sovereignty and went into exile in 1959, along with many of his people who fled to Nepal, India, and in some cases Western countries. While continuing to function as spiritual head, the Dalai Lama stepped down from leadership of the Central Tibetan Administration in 2011.

Particularly since 1990, China has both tightened its control over Tibet, quashing unrest in 2008 and a rash of self-immolations protesting its control. Simultaneously, it has pursued a series of “soft power” measures to undermine the Tibetan refugee community, the Central Tibetan Administration, and the fourteenth Dalai Lama, who represent an independent Tibetan government in exile. This book is a study of these soft power measures, the Tibetan exile community, and the prospects for its future. The title is drawn from a press conference in which the Dalai Lama made this statement:

“Totalitarian regimes sort of pressure everywhere, even in the United States….I think India and Nepal are receiving some special blessing from Peking, that’s quite clear….And the situation in Nepal, it’a not very settled, not very stable. There are a lot of problems. So Chinese pressure, Chinese Communist pressure, is more effective.”

Since 1997, Greg C. Bruno has been traveling to Tibetan refugee settlements in Nepal and India and interviewing refugees, including the Dalai Lama, and he has chronicled as a journalist, the soft power pressure he has witnessed first hand. Even in Dharamsala, the center of the Tibetan refugee community and home of the Dalai Lama, the primary media outlets in nearby China broadcast incessant Communist Party propaganda. Pro-Tibetan actions even in London and the U.S. are met with vigorous PRC pressure and threats. At the same time, efforts of Tibetans to flee the country have been increasingly thwarted and the using of funding and cross border policing efforts have made it increasingly possible to escape into bordering Nepal. Refugee communities have been infiltrated with informers and spies. Chinese efforts have exacerbated religious differences among Tibetan sects, further undermining the Dalai Lama’s spiritual authority and raising increasing questions about his successor, the next reincarnation.

Bruno also gives us a glimpse of the refugee community through his friendship with aging “Pala” who established on the streets of McLeod Ganj the “Walmart of Little Lhasa.” Pala had been his host on early trips to Dharamsala and taught him rudiments of the language. By tracing the life of his family, the children who migrated to European and American Tibetan communities, and the son who remained behind, trying to find purpose in maintaining a trade he had little heart for, we see a snapshot of refugee life–new beginnings, further diaspora, and stalled hopes. He explores the complicated existence of Tibetans as a refugee community within India and the question of whether to naturalize if possible. He helps us understand, through the reports of a refugee, why a young man with a future in Tibet would self-immolate in protest against Chinese rule.

Running through all of this is the question of what will happen with the passing of the fourteenth Dalai Lama. What will China do? What is the future of the Tibetan community in exile? Can it sustain its protest against China? One thing the author makes clear is that as long as this community coheres, it will represent a threat to China, and will continue to enjoy China’s “blessings.”

Both the UN Charter and the Universal Declaration of Human Rights assert the right of a people to self-determination, and three resolutions by the UN General Assembly in 1959, 1961, and 1965 upheld these rights for the Tibetan people. Western support as well as the initial welcome of the Indian government has sustained this exile community. China’s increasing global reach raises the question of whether the Tibetan people inside and outside of China will be forgotten or marginalized. The Dalai Lama has probably done all and more than all that one person can do to raise the profile and case for self-determination of Tibetans.

What Bruno’s book makes clear is that if this case is to have a future, it will depend both on the Tibetan refugee community and advocacy from the global community. Bruno also helps us appreciate that Tibet consists of a distinctive people with its own language, religion, cultural practices, and history. Some of us are deeply disturbed with the danger of the extinction of any living species. How much more should we care about the extinction or assimilation of a people? Bruno helps us understand the hopes and aspirations of this people, and as well as what could be lost if China has its way.

One thought on “Review: Blessings from Beijing”