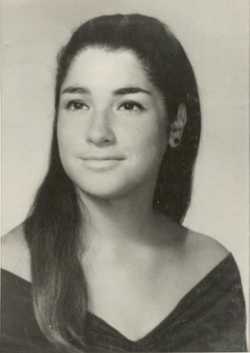 This past week marked another May 4th. Not Star Wars day for me, but another anniversary of the shootings at Kent State the took the lives of four students and wounded nine. This year, the site of the shootings was designated a National Historic Landmark. During the mid- 1980’s, I worked in collegiate ministry with students at Kent and walked the grounds where the shootings occurred. Apart from evidence of bullet ricochets in a statue if one looked closely, you would not know the tragedy that unfolded here on May 4, 1970, as students demonstrated here, and on many campuses against the expansion of the Vietnam war into Cambodia. In the mid-1980’s, it seemed there was a studied effort by campus and town to distance itself from the memory of these events. I’m glad for more recent efforts to ensure that the four who died will not be forgotten: Bill Schroeder, Allison Krause, Jeffrey Miller, and Sandra Lee Scheuer.

I was not quite sixteen at the time of the shootings, a sophomore at Chaney High School. When we returned to school after the shootings, I remember how stunned all of us were. It did not seem that you could find words. There was fear as we heard some adults say, “they should have shot more.” My hair was kind of long then, and I wondered if some would have said or thought that of me.

I was hit particularly hard because one of those shot was Sandra Lee Scheuer, who was born in Youngstown and graduated from Boardman High School. Sandra was twenty years old at the time, an honors student in speech therapy. I didn’t know her, but the fact that she was from the Youngstown area and how she died shook me, and troubles me to this day. She was walking to a mid-term exam with another student, across a parking lot, at 12:25 pm when a group of National Guardsmen 130 yards away turned and fired toward a group of students in the vicinity of the parking lot. When I later walked the ground, I was stunned by how far away the students were who died from the guardsmen who fired–more than a football field away. They were not an imminent threat. Sandra Scheuer was not even involved in the demonstration. A round severed her jugular vein and she died within minutes. Tom Grace, wounded in the ankle, was in the same ambulance as Sandy as paramedics attempted to keep her alive. They could not. 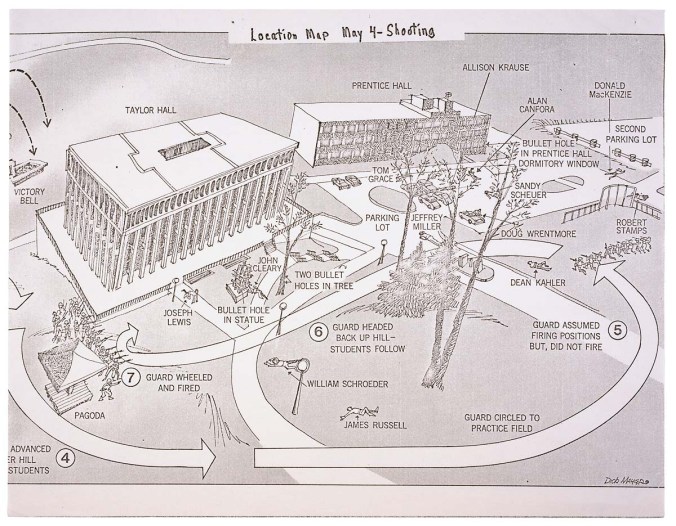 Map of Site of Shootings at Kent State University via National Archives. (Note the distance between the lower left where Guards fired and where Sandy Scheuer fell in the upper right.)

I wonder if we will ever truly know why that particular group of Guard troops turned and fired. What we do know is that the world lost a wonderful young woman in Sandy Scheuer. Speech therapy is a tough academic discipline and to be an honor student requires intelligence and hard work, and a rapport with the people you work with.

Bruce Burkland, who had been going with Sandy for five years before her death, wrote in a letter to The Vindicator:

“To begin to describe what a beautiful person Sandy was would take forever, but there is one thing I want people to know about her which is that Sandy was not a reactionary student and was not involved in the demonstrations at Kent State. Sandy was not the type to cause or incite such events, but rather she always spread joy, happiness and laughter in people’s hearts wherever she went. She was the ultimate of life, especially of my life.”

It is significant that he would emphasize her not being a reactionary or a demonstrator. She was apparently accused wrongly of both, as if this would justify her death. She was neither, but simply a good student, an Alpha Xi Delta sorority sister with ambitions to try to make the world a better place by helping young people with speech and hearing impairments. Others described her as not the least bit political.

We never got to see the life she would live, only hints of what it might have been. But she has been memorialized at Kent State, and in song and poetry. I only recently learned that these words in Neil Young’s “Ohio” are a reference to Sandy:

“What if you knew her,
And found her dead on the ground?
How can you run when you know?”

Canadian poet Gary Geddes also memorialized her in a poem, Sandra Lee Scheuer in 1980. He tells the story of the poem in this article in North by Northwest.

“Hey Sandy, Hey Sandy, why were you the one?
All the years of growing up are wasted now and gone.
Did you see them turn, did you feel the burn
Of the bullets as they flew?”

You can listen to the song with the full lyrics here. The problem with this song is that it implies that Sandy was part of the demonstrations, which was not true. The song would have been more powerful, in my view, if it told the true story of how she was simply a good student in the wrong place at the wrong time, and posed the question of how students so far away posed any threat.