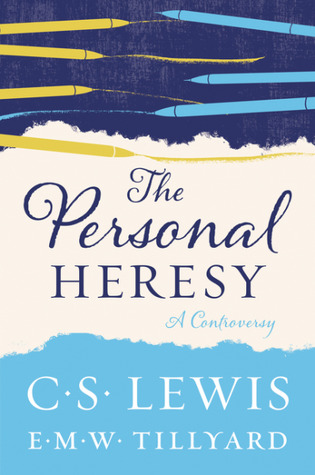 Summary: A discussion of whether the personality of the author should enter into the criticism of a work of poetry.

In 1934 C. S. Lewis published an article in Essays and Studies to defend this assertion:

In this paper I shall maintain that when we read poetry as poetry should be read, we have before us no representation which claims to be the poet, and frequently no representation of a man, a character, or a personality at all.

The article was written for anyone to take up. E. M. W. Tillyard published a response in the following year that led to two more rounds of responses between Lewis and Tillyard, resulting in this book in its present form.

In a nutshell, the controversy between the two men concerned whether, in poetry, we have access to the personality or mind of the poet in some degree (Tillyard) or whether poetry is about something in the world (Lewis). Lewis contends that in poetry, the poet is saying “look at that” and not “look at me.”

Tillyard proposes that in a poet’s work, we encounter a certain “fixed state of mind.” What makes the reading of and reflection upon poetry worthwhile is contact with particularly perceptive minds, and that in literary criticism, to attempt to discern the character of the poet’s mind, as well as what that mind perceives is a valuable part of the critic’s contribution to understanding a work.

What both strenuously object to is “poetolatry,” and particularly using the biography of the poet as some kind of critical shortcut to understanding a work of poetry, without doing the hard work of study and reflection upon the poem itself. The subsequent discussion then is a back and forth between Lewis, who thinks personality does not enter in any important way in the understanding of a poem, and Tillyard, who tries to find various arguments and approaches and examples to persuade Lewis, and the reader, otherwise.

It is of a piece with works like The Abolition of Man, in Lewis’s defense of the objective against the incursions of relativism and subjectivism. While I find myself in agreement with Lewis, and particularly with the slipperiness of assertions about an author’s personality, I also recognize that the style and perception of different writers does reflect something of their unique personalities. The problem, it seems is saying just what this is, and in this case, I think we are wiser to stick with Lewis’s approach, because the work, and what the poet has said in it about something is really all we have. Anything else seems largely a speculative venture, at least in my own critically untrained opinion!

One of the delights in reading this is to see two scholars sharpening each other’s thoughts in dialogue, while respecting the person with whom they are in disagreement. It also strikes me as characteristic of many academic dialogues I have observed–while ideas are sharpened and clarified, positions rarely change, at least within the frame of such a discussion. The ground of disagreement may diminish, the areas of common agreement are more clearly articulated, but usually some fundamental disagreement remains. Even if you do not understand all the terms of the argument, this is a glimpse of the academic world at its best, as these closing words of E. M. W. Tillyard suggest:

…Mr. Lewis is an admirable person to disagree with; and I incline to admire his arguments as much when they seem wrong as when they seem right. He is, indeed, the best kind of opponent, good to agree with when one can, and for an enemy as courteous as he is honest and uncompromising; the kind of opponent with whom I should gladly exchange armour after a parley, even if I cannot move my tent to the ground where his own is pitched.

Would that the university world, and our public discourse were marked more by this kind of spirit!

3 thoughts on “Review: The Personal Heresy”