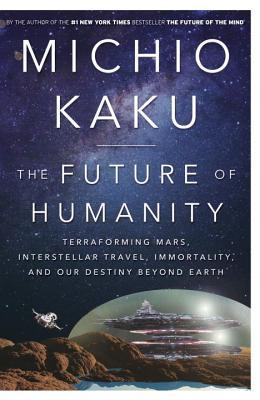 Summary: An exploration of the possibility and necessity of humanity becoming a multi-planetary species, and the revolutions of technology necessary to realize that future.

Michio Kaku is a theoretical physicist studying string theory at the City University of New York, and the author of a series of best-selling futurist works based on his knowledge of physics and other fields. He is also a riveting, passionate speaker who believes, along with others like Elon Musk, that we must envision becoming a multi-planetary species. This, the latest of his books, explores that idea, it’s necessity, and the technological advances that could make this possible.

Kaku’s argument for the necessity of becoming a multi-planetary species is rooted in the priority of the survival of the human species. He is convinced that, whether through physical causes ranging from cataclysmic volcanoes to asteroids or the final death throes of the sun, our planet will become unlivable for human beings–if we do not accomplish this first through human causation as in nuclear holocaust or global warming. Discussing other great challenges we’ve faced through history, he writes:

But now we face perhaps the greatest challenge of all: to leave the confines of the Earth and soar into outer space. The laws of physics are clear; sooner or later we will face global crises that threaten our very existence. (p.6)

In three parts he explores the technologies that can make this possible. The first part explores interplanetary settlement efforts within our solar system, using moon as a base, and Mars as our first settlement, and later possibly settling, or exploiting the resources of the large moons orbiting the gas giants of Jupiter and Saturn. He describes existing efforts by public and private enterprise to return to the moon and create settlements on Mars. This itself is formidable considering exposures to radioactivity and the inhospitable nature of the planet but he argues for the eventual possibility of terra-forming Mars, making it livable and life sustaining. What is fascinating is that much of this is possible by applying and extending our current technology, albeit at great cost.

The second part of the book seemed like something out of Star Trek, exploring the technologies of interstellar travel. All of this is beyond our current technologies. As a physicist, he takes us on a tour of possible technologies from nanoships and laser and solar sail propelled vehicles, to ramjet fusion and antimatter engines, and proposes that the warp drive of The Enterprise is possible, and consists not in propelling one faster than light, but literally warping space so that a vessel is pulled through it at hyper light speeds. Nearly all of this requires inordinately great quantities of energy, and presupposes a level of civilization at which we harness, first the energies of the sun, and than galactic levels of energy. This will allow us to explore at least the nearby stars or further into a galaxy of stars where it is increasingly evident that there are many possible habitable planets.

The third part explores the reality that the great distances to be traveled, even should we exceed the speed of light, either require multi-generational crews, or advances toward immortality. He explores research on curing aging, on trans-humanism in which humans and machines become increasingly integrated. He discusses the Human Connectome Project, in which human neural networks are mapped, digitized, and potentially could be reproduced light years away, transmitted via laser networks. He also speculates on the existence of other more advanced civilizations. He mentions observations of recurring drops in energy output of star KIC 8462852 by as much as 30 percent positing an object 22 times as large as Jupiter, speculating that one possibility would be a megastructure like a Dyson sphere constructed by an alien civilization.This part also gets into Kaku’s area of theoretical physics, string theory, as he explores the possibility of travel through wormholes and stargates and perhaps even escaping the present universe into one of many multiverses, particularly useful when this one burns out.

Whew! Kaku’s tour of the technologies necessary for interstellar travel is both breathtaking, and staggering. On one hand, much of the technology we use today, even that I am using as I write, was science fiction in my childhood. It is always dangerous to scoff at what seems impossible. The cell phone at my side represents applications of theoretical physics unknown 150 years ago in terms of the miniaturized circuitry and memory, cellular and wi-fi capabilities, GPS tracking, and touch screens. What would have been an object of wonder 150 years ago is now a commonplace of many of our lives. Yet what Kaku describes in this book, particularly in parts two and three, strings together ventures of immense cost, requiring unimaginable amounts of power, huge quantities of rare (and dangerous) resources like anti-matter, as well as scenarios, the survivability of which are in question, all of which to preserve the human species on a multi-planetary scale. Of course Kaku allows millenia for reaching such capabilities.

The most credible part of the book for me was the near-term ideas of travel to Mars, perhaps even establishing some form of outpost there. If something of a cataclysmic nature were to occur on Earth in the next couple centuries, such an outpost might preserve civilization, and even re-settle earth. Even this is tremendously costly as well as risky. We must expect lives to be lost, even as they were among other explorers and settlers throughout our history. But it also raised questions of several sorts.

Some were questions of priority. Should we think of terra-forming Mars when our own planet’s earth, water and air need so much attention? Should we pour huge funds and inordinate amounts of energy into space travel when transport on earth is still carbon-based and polluting? When we are not yet addressing preventable diseases of childhood, and providing quality and affordable health care on a global basis, is it right to pour huge amounts into life-extending technologies that may benefit a select few? Or even as we think about planetary defense, might we focus on technologies for detection and destruction of planet-threatening objects from outer space? All this falls under the question of caring for the planet and people that we have before we think about settling other worlds.

Some are more fundamental questions having to do with whether we ought to do these things. I think of this particularly around the discussion of immortality. Kaku fails to deal with the issue of whether it is a good thing for humans with our flawed as well as noble nature to live for ever. Have you ever noticed how, as people age, they become who they always were, to an even greater degree? We may grow both more loving and more neurotic. We may grow more knowledgeable and more petty. The closest he gets to this is when he quotes the late Stephen Hawking who said, “We only have to look at ourselves to see how intelligent life might develop into something we wouldn’t want to meet.” In my own faith tradition, we believe that it is a severe mercy of God that flawed and fallen people don’t live endlessly in our bodies and that hope is found not in endless mortal life, but life everlasting beyond bodily death.

Finally, I am troubled with the hubristic strains that carry as much attraction for many contemporary hearers as they did for the first couple in the garden, and the tower builders of Babel. Kaku writes:

…our destiny is to become the gods we once feared and worshipped. Science will give us the means by which we can shape the universe in our image. The question is whether we will have the wisdom of Solomon to accompany this vast celestial power. (p. 14)

“You shall be as gods” has been a temptation from the very beginning, and is one this book proffers to its readers. Along with that temptation comes tower-building (or space elevator) projects that reflect our pitiful efforts to offset our creaturely vulnerabilities. Will we exchange dependence on the sustenance of the Creator and responsible care for the world we’ve been given for anxious and costly efforts to preserve ourselves in other worlds, and perhaps neglect the most vulnerable on our own planet? I find the reference to Solomon fascinating, because the record tells us that, while wise, he abandoned the fear of God which is the beginning of wisdom, giving himself to building projects that taxed and enslaved, and that he multiplied wives and experiences. If Ecclesiastes gives us the final verdict on this project, it is all summed up as “meaningless,” “a chasing after the wind,” and that “with much wisdom comes much sorrow.” It seems that this is what always comes of trying to make ourselves gods, and trying to stave off death when a universe of wonder and a world of beauty to be cared for beckons us to trust its Maker.

3 thoughts on “Review: The Future of Humanity”