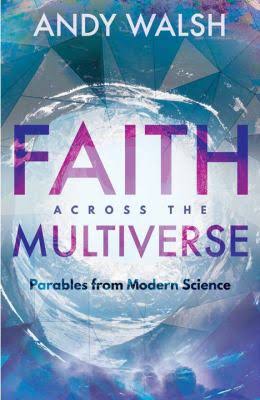 Summary: Explores how science, particularly math, physics, biology, and computer science, might illuminate one’s understanding of the Bible and the God of the Bible.

In his parables, Jesus spoke of various natural phenomenon to help us understand the kingdom of God–seeds, birds of the air, lilies of the fields, yeast, sheep, and more. God invites Abraham to count the stars and questions Job about the creation. In Faith Across the Multiverse, Andy Walsh asks the question of how various observable phenomenon and theories in science might illuminate our understanding of God, the Bible and spiritual realities. He focuses his inquiry in the fields of math, physics, biology, and computer science, reflecting his background in several of these fields. His day job is Chief Science Officer at Health Monitoring Systems where he develops statistical methods for public health surveillance. His doctoral and post-doctoral work was in fields of molecular biology and immunology and computational biology. He writes a weekly science column for InterVarsity’s Emerging Scholars Network blog.  It is also important to know that Andy is a fan of super-hero comics, particularly X-Men and he mixes these characters and stories, along with popular science fiction into his discussion of science and faith.

In the realm of mathematics, he explores faith as a choice of axioms, sin in terms of mathematical optimization and choosing an objective function to maximize. Most fascinating for me was his use of chaos dynamics as a possible way to understand sovereign grace in which various paths might lead to the same outcome, as is the case with “strange attractors.”

In the realm of physics, he follows John Polkinghorne in discussions of how the dual wave/particle character of light might give us insight into the incarnation of Jesus. He also explores how entropy might help us understand sin and death, and the transformative work of dying to oneself in Christ.

The biology of the genome, our immune systems, and even the constitution of ant colonies may shed light on the relational dynamics and nature of the church. The world of computer science, in which simple rules, procedures, and inputs may result in complex outcomes suggest how a single book, the Bible might be able to address the complexities of human existence throughout our history.

The book has the feel of being written for “science nerds,” kind of like the characters one encounters on The Big Bang Theory, who geek out on in-depth discussions of scientific theory, punctuated by excursions to the comic book store and debates over Star Trek versus Star Wars. Walsh writes, “One feature of the world that pains me and I believe pains God is the fact that so many feel they need to choose between science and belief in the God of the Bible.” I’ve worked with “science nerds” in graduate student ministry, and I can vouch that there many who think science and faith are mutually exclusive. Walsh’s careful explanation of scientific theories and phenomenon, which may be off-putting for some, establishes for the scientifically literate grounds for drawing the connections or “parables” of science and Christian belief. The effect of his discussion is both to suggest a consonance between science and Christian beliefs for the skeptic, and to shed fresh light from science on Christian belief for those who do believe. The frequent references to comic superheroes makes this all the more fun.

I suspect this book was not written for a social science-liberal arts-theology nerd like me. I’ll confess that I haven’t solved a math equation since college, and while I enjoy general science writing, the depth of explanations was a stretch for me, that made me flex some under-used mental muscles. I suspect my math geek, computer scientist son would love this book, particularly the portions on fractals and chaos mathematics. There are significant numbers like him out there, and many question whether there is even room for Christian belief in a world shaped by science and technology. Andy Walsh writes as one of them who hopes to remove the barriers between science and belief by sharing the ways his own research and other science reading has enriched his understanding of and love for God.

5 thoughts on “Review: Faith Across the Multiverse”