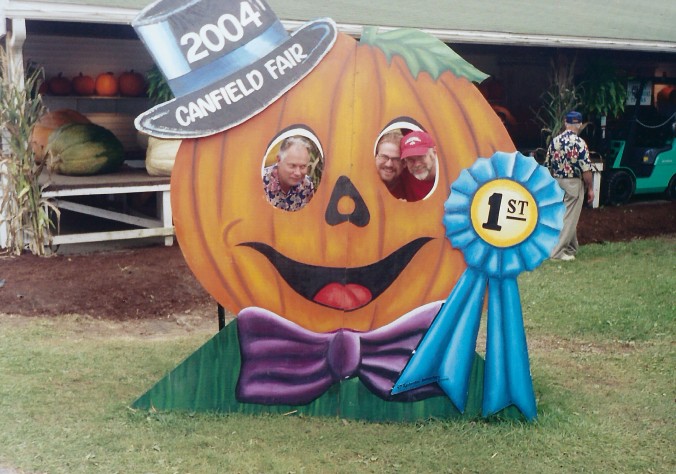 Pictures outside the Pumpkin Barn are a must! Bob Trube, all rights reserved, 2004.

How many of you took pictures here? These are younger versions of my son and me in the left eye of the Mr. Pumpkin, and my good friend, Bob, in the right eye.

After looking at the pumpkin pyramid, you walked up to the porch and gawked at all the huge pumpkins on display, some over 1,000 pounds, and all somewhat flattened out and distorted by their own weight. After that, you stepped into the barn and looked at the biggest pumpkin of the year.

Finally, you wandered through the barn and looked at the incredible variety of colors and shapes of pumpkins and squash, organized into fantastic displays, including various creations of people and animals out of pumpkins. It was a reminder of what a versatile vegetable squash is–for eating, for decoration, for birdhouses, for colorful displays, and for making bizarre creations. 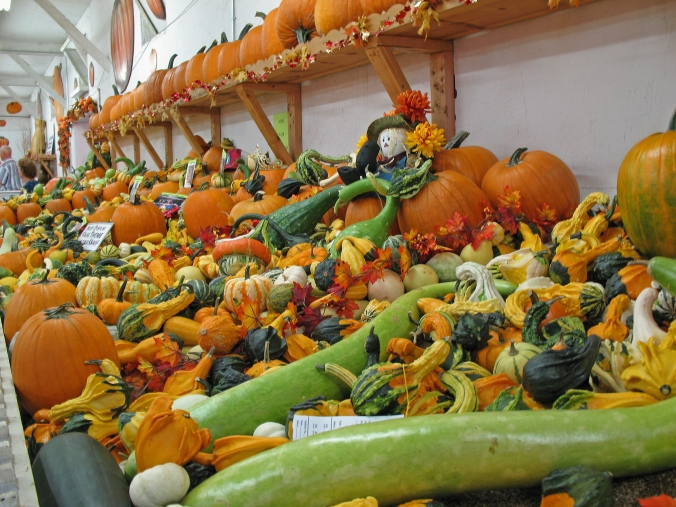 Photo by WDWParksGal-Stock, Fall Harvest at the Canfield Fair, via Deviant Art

Did you know that the pumpkin show was not always a part of the Canfield Fair? It was started only in 1962, which makes this year’s the 57th pumpkin show. It was the brainchild of Homer Schaeffer and Ray Carr, who thought the Canfield Fair needed a pumpkin show similar to the Circleville Pumpkin Show, south of Columbus. The first year, the winning pumpkin weighed just 85 pounds and was grown by John Gavin.

The pumpkins grew in size over the years. By 1991, the largest was 544 pounds, grown by Ron and Kathy Moffett, who won a number of championships during the 1990’s. The 1,000 pound threshold was surpassed in 2008 by Jerry Rose, who had won a number of grand champions. Another Jerry, Jerry Snyder set the all-time record at 1512 pounds in 2017. This year’s winner, grown by Chuck Greathouse, came in at 1381 pounds.

How do you weigh one of these monsters? Very carefully, to be sure. I came across this video of pumpkin weighing at the Fair in 2017. I was particularly impressed to see it was grown by a young boy. If you think a 1500 pound pumpkin is impressive, there is a giant pumpkin weigh-in at the end of the season and it is not unusual to have a 2,000 pound pumpkin!

All the pumpkin growers will tell you that the seed is the secret to growing a huge pumpkin (really a form of squash). Seeds from championship pumpkins can run as much as $50 a seed (that is right–one seed!). Of course, weather, pruning, and insect control are very important. If the idea of raising a REALLY large pumpkin, and not just looking at them fascinates you, there is a local group in the Canfield-Salem area called the Ohio Valley Giant Pumpkin Growers, part of a global organization called the Great Pumpkin Commonwealth.

For most of us, a picture at Mr. Pumpkin, and walking through all the squash and pumpkin displays is enough. After all, there is so much else to see and good food to sample!

3 thoughts on “Growing Up in Working Class Youngstown — Pumpkin Barn”