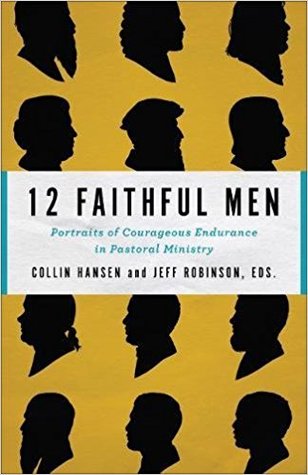 Pastoral ministry is not for sissies, contrary to some popular stereotypes. The hours can be long, you often encounter people at their worst (and sometimes at their best), your call is to be faithful to God’s word, and a shepherd of God’s people. Sooner or later, conflict and criticism homes in on you. Pastors not only help the suffering. If they are at all faithful to their work, they are the suffering.

This is a book to give courage to pastors. It consists of twelve thumbnail biographies of faithful men (I would hope a companion volume on faithful women is forthcoming–there are a host of examples). Some are quite familiar: Paul, John Calvin, John Bunyan, Jonathan Edwards, John Newton, Charles Spurgeon. Some you may have heard of: Andrew Fuller, Charles Simeon, J.C.Ryle. And some like John Chavis, an early Black preacher; Janani Luwum, the Ugandan archbishop martyred under Idi Amin; and Wang Ming-Dao, a Chinese pastor who led the house church movement under Mao.

What they all have in common is that faithfulness in ministry led to some form of suffering. A number went to prison, including Paul, John Bunyan, Luwum, and Wang Ming-Dao. Others faced controversy with their people, including Calvin and Edwards and Simeon. Spurgeon struggled with the black dog of depression throughout his ministry. Chavis, highly educated and even a tutor of white children was barred from preaching, though licensed, simply because he was black.

Each of the biographers in this volume explore the ways these men were formed through suffering. For Paul, suffering portrayed what he proclaimed, focused him on eternal things, authenticated the integrity of his ministry and destroyed self-glory. Calvin came to understand through the suffering of exile the call to exile we all share. Prison plunged Bunyan into the scriptures such that Spurgeon comment that if you cut Bunyan, he would bleed “bibline.” Fuller learned through the heartbreaks of the death of his wife and son, and another wayward son, to give comfort to all who struggled with similar circumstances. Simeon pressed on despite great opposition in prayerful, humble expository ministry from which might be traced the University and Colleges Christian Fellowship in the United Kingdom, InterVarsity/USA and the ministry of John Stott, Kent Hughes and others.

I appreciate the inclusion of examples of African American, Chinese and African examples and would hope that the western Church might hear more examples of Christian faithfulness around the world. In a culture where it seems that the most common prayer is that things would go “smoothly,” the honest portrayal of the various forms of suffering that is the lot of faithful pastors is both a bracing word, and a welcome balm. I suspect many pastors wonder if they are alone, and if they have done something wrong if they are not “prospering.”

The biographies are short, rather than exhaustive, averaging about fifteen pages, making this ideal for devotional reading. While more lengthy and definitive works have been written about many, the focus on the theme of endurance through suffering and God’s provident work makes these pithy biographies welcome support amid the press of pastoral duties. Buy two of these, one for your pastor, and one to understand and pray for her or him (and other faithful pastors around the world).