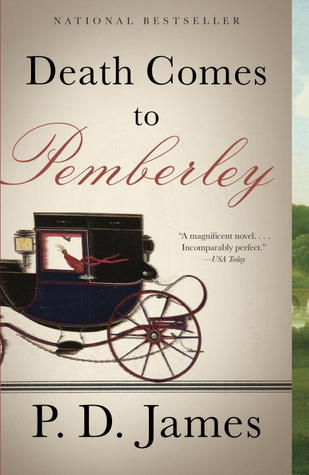 Summary: P.D. James writes a murder mystery as a sequel to Jane Austen’s Pride and Prejudice.

Jane Austen knock-offs are a cottage industry. Even a former neighbor of ours, Regina Jeffers, has written a whole series of Jane Austen books. Among those to try her hand at this genre is accomplished mystery writer, P.D. James. Over the years, I’ve delighted in her Adam Dalgleish mysteries, and though I’m not among the Austen fans, I thought I’d pick this up.

The story takes up six years into the marriage of Elizabeth and Mr. Darcy. Elizabeth’s sister Lydia has married George Wickham, childhood friend of Darcy, but is banned from Pemberley after attempting to seduce Darcy’s sister, Georgiana. There has always been something a bit disreputable about Wickham, but he distinguished himself in the Irish rebellion, and since leaving the military has bounced around in different jobs, leaning on family and others for support. It is the day before the annual Lady Anne Ball, the big social event at the Darcy estate. Fitzwilliam Darcy is on hand, hoping to win Georgiana’s hand, even while a newcomer, Mr. Alveston, a lawyer from London, takes the inside track. The whole household is busy at their work, including the elderly servant Bidwell, who refuses to go home to his family living in the forest on the estate, even though his son is declining toward death.

Wickham, Lydia, and Captain Denny, friend of Wickham show up at the Pemberley estate, cutting through the forest. The plan was to leave Lydia at the Darcy house while they went on to an errand. Words arise between Wickham and Captain Denny, who leaves the carriage, plunging into the forest, to be followed shortly by Wickham. Lydia and her driver wait, then hear shots fired. They go to Pemberley for help. A search party finds a drunken and distraught Wickham, covered in blood over the dead body of Captain Denny. His first words were, “He’s dead! Oh God, Denny’s dead! He was my friend, my only friend, and I’ve killed him! I’ve killed him! It’s my fault.”

With this seeming confession, he is taken into custody, awaiting trial for the murder. But Darcy is torn between his dislike for Wickham, and a sense that the words, taken for a confession, might mean something else–that it was Wickham’s quarrel that drove Denny into the hands of his killer, and thus his fault. This is what Wickham, when he comes to his senses maintains. But who this murderer could be and how it was done remains unclear as Wickham goes to trial, defended by the able Jeremiah Mickledore.

It is my impression that James captures the manners and maneuverings that characterize the country houses in Austen, and the affection between Darcy and Elizabeth, such that those who love this genre will be at home. Yet I suspect this is neither the best Austen nor the best James. We barely know Captain Denny before he is killed. I did not feel strongly drawn to any of the characters and only rooted for Wickham because Darcy didn’t want him to be convicted. There is little in the way of a murder investigation and the plot relies on an eleventh hour confession.

As far as I can tell, this was the last work completed by James in her lifetime, when she was in her nineties (she died in 2014). It does not rival her Children of Men or the best of her Dalgleish stories. It is a pleasant diversion and was considered worth of a PBS Masterpiece adaptation in 2014. And it allowed James the satisfaction of having written a Jane Austen novel.